The Israel Folau saga looks set to drag on well into the new year as the former Wallabies fullback heads into mediation clinging to hopes of an apology from the game that sacked him.

Folau will come face to face with the administrator who ended his decorated professional football career, Rugby Australia boss Raelene Castle, when a court-ordered mediation hearing gets underway in the Federal Circuit Court in Melbourne on Monday. 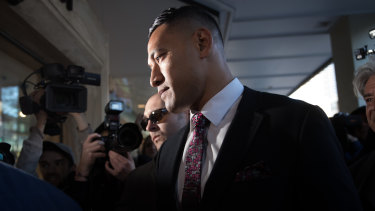 Israel Folau’s camp says it is hopeful of success at a mediation session on Monday. Credit:Janie Barrett

Both parties have signaled their intent to settle the matter out of court but after up to three attempts to reach an agreement through legal back-channels, Monday's discussions are almost certain to founder on the issue of an apology and reinstatement.

Folau is seeking $14 million in compensation for what he claims was his unlawful sacking over social media posts that warned hell awaited homosexuals and that legal recognition of transgender and intersex Australians was "evil".

If mediation fails the case will go to trial on February 4, four days into the new Super Rugby season, the competition RA desperately hopes will give rugby fans some football to talk about, instead of this year's World Cup failure and the ongoing debate about Folau's religious views.

"We are heading into Monday's mediation in good faith that an amicable outcome can be reached," Folau's solicitor George Haros said.

"While it is our hope the matter can be resolved, if mediation is unsuccessful Israel is ready for trial come February."

RA is also hoping to resolve the matter outside of a trial before an open court, which will likely see the airing of testimony from former and current Wallabies, plus sensitive commercial and financial details relating to Folau's $4.2 million contract, which was torn up by an independent tribunal in May.

But the organisation is unlikely to cede to Folau's demands they apologise to him and reinstate him as a professional Australian player.

The dual international, who won rugby's highest honour the John Eales Medal a record three times, is also claiming damages, compensation, interest on both of those and further financial penalties.

The discussions will start on the back of multiple days of damage control from Folau, which saw him release two videos clarifying comments he made suggesting the recent and ongoing bushfire calamity was "a little taste of God's judgment".

"Look how rapid these bushfires, these droughts, all these things have come, in a short period of time," Folau told members of his church. "You think it's a coincidence or not? God is speaking to you guys. Australia, you need to repent."

Folau said his remarks were not aimed directly at the bushfire victims, but he also doubled down on his decision to comment publicly on sexuality and other matters, saying it would be "unloving" of him to do otherwise.

"Sharing the word of God is so important to me because it's the great commission, it's what God has called each Christian to do," he said.

"It would be unloving for me just to keep it to myself and keep it within the four walls of the church and within my family. Because God wants the gospel out there and wants people to hopefully come to the knowledge of the truth and have that peace and love that comes from him.

"It's our duty as a Christian to be able to go out there and share that. That's why I'm so vocal at it, at Church, in the general public and on social media. Because I care about the state of people's souls and the love that I have for mankind is what is driving me."

Folau's legal team also look set to target the legitimacy of the three-person tribunal that found him guilty of breaching the code of conduct. In an amended statement of claim they allege Castle or then-Wallabies coach Michael Cheika should have let the panel know that a senior player had told them Folau's sacking would cause division within the playing group.

"In the course of givingt evidence to the Tribunal on behalf of Rugby Austrlaia, neither [Castle or Cheika] gave evidence about the [senior player's warning], which was a denial of natural justice…," the claim stated.