Rugby Australia appears to be going cold on the idea of a fully-fledged trans-Tasman Super Rugby competition next year unless it is financially compensated. 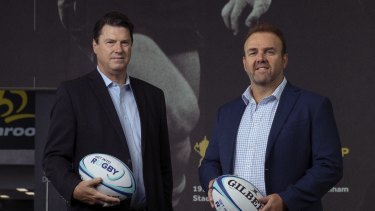 A stuff.co.nz report on Tuesday quoted McLennan as saying the current Trans-Tasman dynamic was “imbalanced” and hinted tensions were rising around what next year’s competition structure should look like.

New Zealand wants a unified trans-Tasman competition between the five Australian and five Kiwi teams, plus two potential inclusions for 2022 in Fijian Drua and Moana Pasifika.

However, while RA does not want to lose the high performance element of playing New Zealand teams regularly, the governing body is extremely keen for a local component given television ratings and crowds were stronger in the domestic Super Rugby AU competition.

No formal model has been put to New Zealand but RA views having more Australian derbies as favourable.

Following a year in which Kiwi teams won 23 of 25 matches against their Australian rivals, RA officials are exploring an NFL-style conference model.

The idea, yet to be ratified by the board, is that five Australian teams, plus Fijian Drua would compete in their own conference similar to Super Rugby AU. Five New Zealand sides and another new team, Moana Pasifika, would do the same, with everyone playing each other twice.

The top two or three teams each from Australia and New Zealand – based on standings – would then come together and play matches, before separate semi-finals and a final. Under this model, RA is considering pushing for an Australian-only semi-final plus a guaranteed team in the final.

New Zealand would be highly unlikely to agree to this given the dominance of their Super Rugby teams in recent years.

RA wants to preserve the good elements of Super Rugby AU – such as ratings and getting fans familiar with players – and privately believe New Zealand should be open to giving a greater slice of their broadcast revenue because a trans-Tasman element underpins their entire agreement with Sky, which is far more lucrative.

“The cost of running and funding these teams is similar on both sides of the ditch,” McLennan told the Herald. “If it’s to be a true partnership, there can’t be imbalances.”

Last year, Australian and New Zealand officials barely saw eye-to-eye as they negotiated who should host the Rugby Championship.

RA was also upset by New Zealand’s implication that two or three Australian teams would have to be cut in a new competition.

While tensions thawed at the back end of the year, next year’s competition is becoming a major sticking point.

“We’d like to avoid Mount Vesuvius blowing its top again. As long as we get the result for Australian rugby,” McLennan said.

“I think we need to get together face-to-face as soon as possible. I’ve met the new chairman Stewart Mitchell and he is a very good guy.

“[Nine] is a strategic partner, so of course we’d talk to them about the optimal outcome for Australia.”

A resolution by the end of June appears unlikely.

There is also the issue of whether Fijian Drua and Moana Pasifika will be included next year, with both RA and NZR needing to give the green light despite the latter effectively overseeing their bids.

One Fijian rugby source said they still expected to have an answer by the end of the month.

RA has reservations about the two franchises’ financial predicament and viability in 2022.

A six-week Super Rugby Trans-Tasman tournament might have provided broadcasters on both sides of the ditch with more matches but interest in the fortunes of Australia teams declined significantly after 10 straight losses to begin.

Meanwhile, Wallabies assistant Scott Wisemantel revealed on Tuesday that national coaches were giving gold, silver and bronze rankings to squad members after each training session to provide a gauge on who should be picked for the first Test against France on July 7.

Wisemantel, the former England assistant at the 2019 Rugby World Cup, explained how he and other coaches were deciding who was impressing the most at training and taking some inspiration from the Olympic Games, which are a month away.

“At the end of every training day we pick a gold, silver and bronze as far as our best three on the ground. It’s been quite diverse our best three,” Wisemantel said. “Whilst we have a blueprint of roughly what we think might be the [matchday] 23, it’s nothing set in stone at this stage. The competition’s fierce.

“If the same name keeps coming up, when you have a selection meeting you have to play devil’s advocate.

“So if someone says someone’s a shoe-in and then all of a sudden you’ve got a person who’s been on the podium every day, well you go ‘hang on, how does this work?’”