Queensland Reds centre Hamish Stewart has become the second player stood down by coach Brad Thorn this year for an alcohol-related “discipline issue” ahead of Saturday’s top of the table clash with the Brumbies.

It comes as Thorn expressed extreme disappointment at reports Izack Rodda, who left the Reds in bitter circumstances last year, is set to return to Australian rugby. 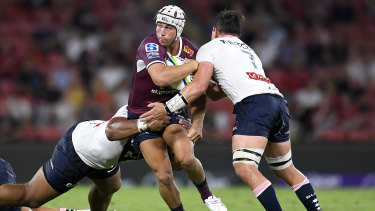 Stewart, who lined up at inside-centre in Queensland’s first two wins of the season, was omitted from this week’s match day 23 altogether, with Wallabies duo Hunter Paisami and Jordan Petaia now linking up in the midfield.

Suliasi Vunivalu will play outside the pair on the wing in his first start for the Reds, just under a month after it emerged he had been charged with common assault for an alleged altercation with a bouncer while intoxicated outside a Brisbane nightclub.

Thorn left Vunivalu out of the team’s season opener as a result.

In another disciplinary issue, Thorn confirmed on Thursday Stewart wouldn’t be taking the field at GIO Stadium.

“Part of that was around a discipline issue, just internally, just around our standards,” Thorn said.

Queensland Rugby Union said Stewart’s exclusion was a combination of factors and that the final straw was when he arrived late to a team medical check-up after the side’s 23-21 victory over the Melbourne Rebels.

Queensland Rugby Union said Stewart smelt of alcohol and was in an unfit state when he arrived for the check-up, but maintained he was not intoxicated at the time.

Whatever triggered the decision, Thorn is continuing his attempts to be instil high standards on his players’ off-field behaviour. 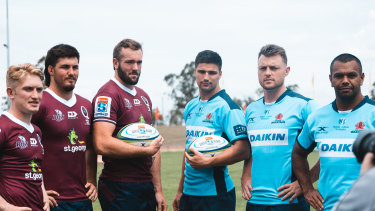 Isaac Lucas (left) and Izack Rodda (third from left) have since departed the Reds since this photo taken in the pre-season of 2020. Credit:NSW Rugby

“We rate Hamish very highly,” Thorn said. “He is a guy who is approaching 50 caps for Queensland. His opportunity will come again. If you’re competing at this level, don’t ever open a door to someone else would be my thoughts.”

Meanwhile, Thorn didn’t hide his displeasure when asked about the possibility of Rodda returning to an Australian Super Rugby franchise this year.

Rodda, Harry Hockings and Isaac Lucas were stood down in May last year for refusing to accept a short-term pay cut in line with other Australian professional players.

Rodda, the 25-Test Wallaby, wanted to remain in Australia but was blocked from joining another Super Rugby franchise, prompting him to take up a deal in France.

The 24-year-old’s overseas deal expires in July and he is exploring options in Australia, with the Herald reporting this week he was leaning towards taking up a deal with the Western Force over the Waratahs.

RA insists that if Rodda does return, he won’t receive a national top-up for his salary.

“That was disappointing when it happened and it’s disappointing to hear that as well,” Thorn said. “That’s less than 12 months since that situation occurred. Here at Queensland Rugby it’s something we wouldn’t agree about. That’s with Rugby Australia.

“[It is a bit like] having your cake and eating it too. You’ve got [second-rowers] Angus Blyth, Seru Uru is showing his hand, you’ve got Lukhan [Salakaia-Loto] … you’ve got Cadeyrn Neville playing outstanding footy. Darcy Swain is working hard.

“You can always bring back talent … but there is talent in this country and they are here and invested here.

“You don’t dislike that person or anything, but the whole game suffered here, all the players ended up on 40 per cent of their wage and it was hard yakka around the future of rugby in Australia. A lot of people persevered and made sacrifices. With our values here, that doesn’t align with those.”

Ryan puts Cheika in his place over Super Rugby signings