Taniela Tupou and Ned Hanigan have been recalled to the Wallabies' starting XV as coach Dave Rennie searches for additional firepower to match the Pumas.

Tupou hasn't worn the No. 3 since the second Bledisloe Cup clash of the year but he has earned the nod at starting tighthead prop, where he will pack down alongside Scott Sio and Brandon Paenga-Amosa. 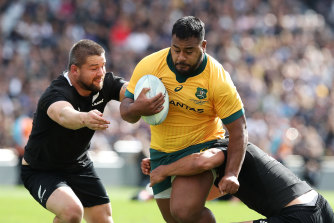 Taniela Tupou is back for the Wallabies.Credit:Getty

"After being left out in our last Test we got the reaction we expected from Scott, his preparation this week has been excellent and his experience will be invaluable against Argentina," Rennie said.

While the backs are unchanged, there is some movement on the bench.

Rob Valetini has taken Hanigan's place on the pine and Jake Gordon has been recalled in place of Tate McDermott.

"As a group, we know respect is earned daily and understand the importance of backing up our last performance with another quality effort on Saturday night.

"The tournament is evenly poised and our fate is in our own hands.

"We saw how much passion Argentina play with in their performance last weekend and we’re excited by the challenge in Newcastle."

England and Ireland united behind their talismanic second rows