Sam Underhill is back: Eddie Jones recalls ‘tackling machine’ to stop the All Blacks at Twickenham

England are ready to deploy their ‘tackling machine’ to lead the resistance against New Zealand at Twickenham — with Sam Underhill expected to be recalled to the starting XV.

The 22-year-old Bath flanker is set to replace Tom Curry in the back row after the Sale openside was ruled out of the series with an ankle injury.

Eddie Jones is due to name his line-up to face the world champions at noon on Thursday and Underhill should feature at No 7 as a specialist openside and renowned hit-man. 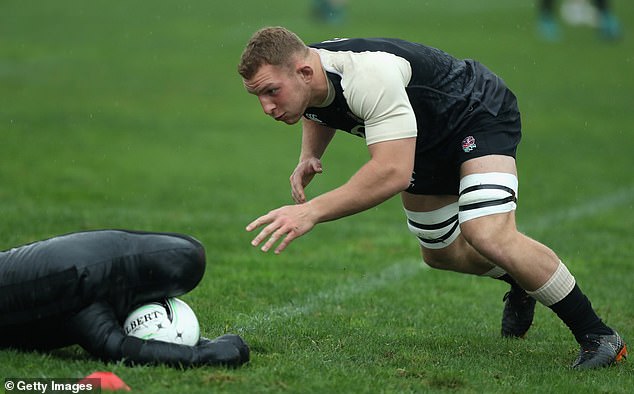 Nine months ago, the last time he played for England at Twickenham, he came off the bench and had a devastating impact on a tight contest against Wales.

His astonishing 61st-minute tackle left Scott Williams, who was sliding towards the corner to score, upside down in touch and wondering how he had been denied a potentially match-winning try.

Owen Farrell paid tribute by saying: ‘That tackle by Sam was unbelievable — one of the best you’ll see. He’s a tackling machine.’ England are going to need such men on Saturday.

The peerless All Blacks will pose all manner of threats, so the recall of someone capable of stopping them in their tracks is timely. Underhill missed out on a place in the match-day 23 for the win over South Africa but his inclusion this time is the most effective solution to a back-row selection quandary. 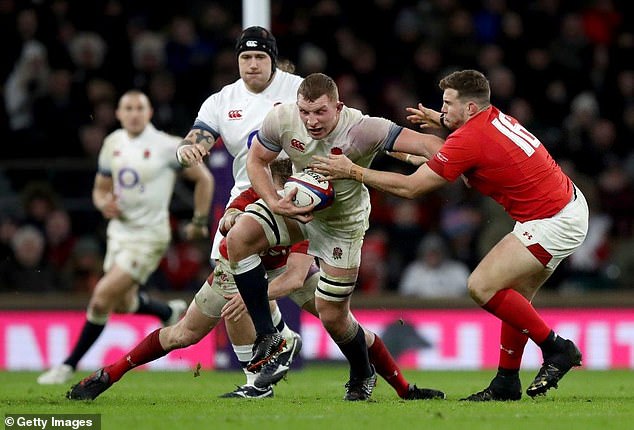 He said: ‘I’d be delighted with any involvement. I would like to think I could offer something in defence — that’s an area of the game I enjoy a lot and an area where I try to, not lead the way, but influence the way we do things.’

Underhill recalled the Wales game as a ‘huge day — one of my favourite days’. The tackle to stop Williams not only went straight into Twickenham folklore, it became his calling card.

Scrum coach Neal Hatley mentioned it on Wednesday, saying: ‘Remember the Six Nations — that tackle in the corner against Wales. Sam’s a good defender and someone hot on the ball. It’s a like-for-like swap with Tom Curry, really.

‘We see him as causing problems defensively, working hard over the ball and with the ability to link in attack. We know he had a few niggles at the start of the season with Bath but we feel that before he came into camp we started to see that from him and he’s been doing it since he came in.’ 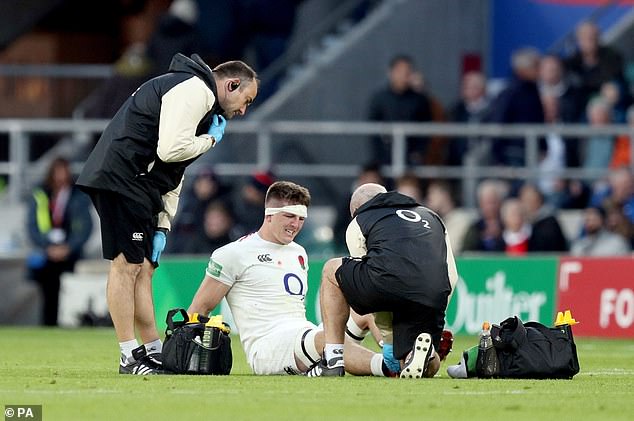 Underhill is set to replace Tom Curry, who picked up an injury against South Africa, in the pack 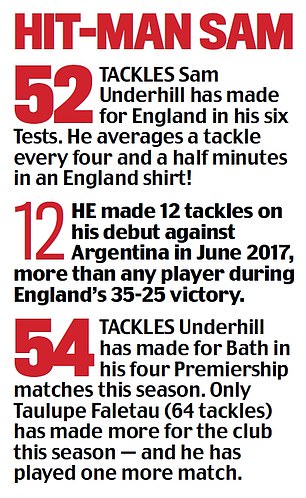 Co-captain Dylan Hartley gave his own endorsement of the man poised for a return to England’s starting pack, saying: ‘It’s just great for him that he gets another shot. We talked about this the other day — the disappointment of not playing — but you’ve still got a role to play. He’s done his job incredibly well, and guess what happens? He gets an opportunity this week. I’m happy for him.’

Asked about the Williams tackle, Hartley added: ‘It was a great tackle, a great show of will and commitment, and not giving up to the very end.’

Hatley hinted that England’s coaches will resist any temptation to rotate their props for this showdown with the All Blacks, despite some early scrum problems against the Springboks last weekend. So with Alec Hepburn and Kyle Sinckler expected to keep their starting places, the pack should show just the one change. 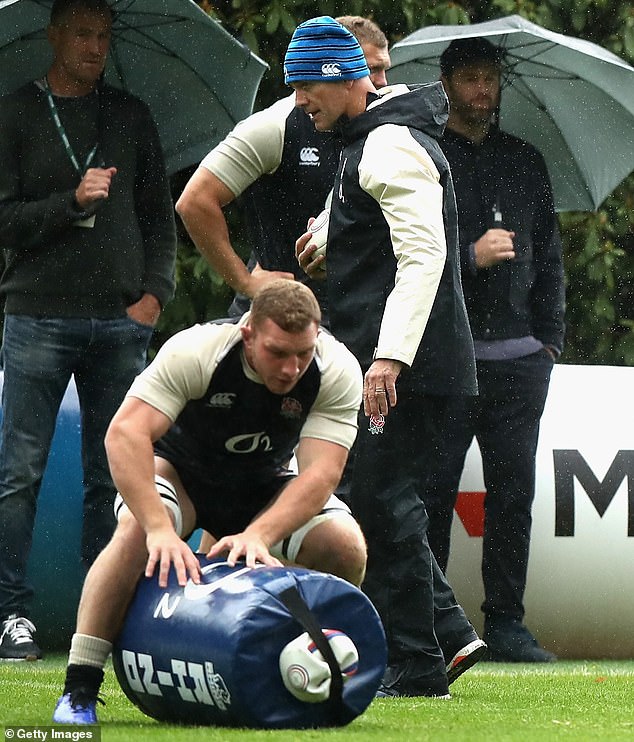 ‘Consistency is going to be important and we’re working hard on that,’ said Hatley. ‘New Zealand have improved hugely at the scrum. Six of that pack work together for Canterbury and then work together for the All Blacks, so they have unbelievable consistency in terms of selection and experience.’

The other main area of intrigue involves the outside backs. In theory, with 25 players retained in the squad, one of Manu Tuilagi, Chris Ashton and Jack Nowell is poised to miss the cut entirely.

Ashton and Nowell were both potentially in consideration for a starting place on the wing, with the threat that whoever misses out might not make the match-day squad at all — although there were no firm indications on Wednesday night that Tuilagi’s involvement was assured either.

With Courtney Lawes back in the mix for a place in the final 23, there were likely to be two spots being contested by Northampton’s Lion Charlie Ewels and Zach Mercer.

Will Greenwood: The RFU need short-term cuts for long-term survival

Rugby World Cup 2019: Wales flash with brilliance but Georgia highlight the work that must still be done