Wales 21-16 Ireland: Peter O’Mahony sees red for moment of madness before George North and Louis Rees-Zammit touch down for hosts to secure Six Nations victory and ease the pressure on coach Wayne Pivac

In it flanker Peter O’Mahony became the first Irishman to be sent off in this tournament since Willie Duggan in 1977, but his side rallied superbly and pushed Wales right to the death.

Scoring all their points after he departed, though Johnny Sexton and Billy Burns’ boot and a try from Tadhg Beirne they nearly did it. 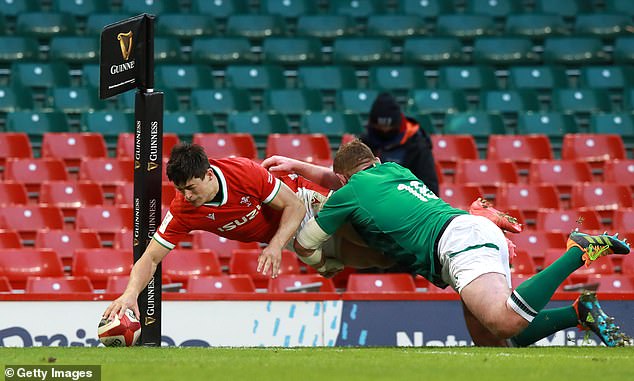 But Wales stood strong, showing an old-school grit, fight and pride that they lost in 2020.

George North and Louis Rees-Zammit scored tries and Leigh Halfpenny hit the rest from the tee.

It is Scotland up next for the Welsh, another fierce fight awaits. 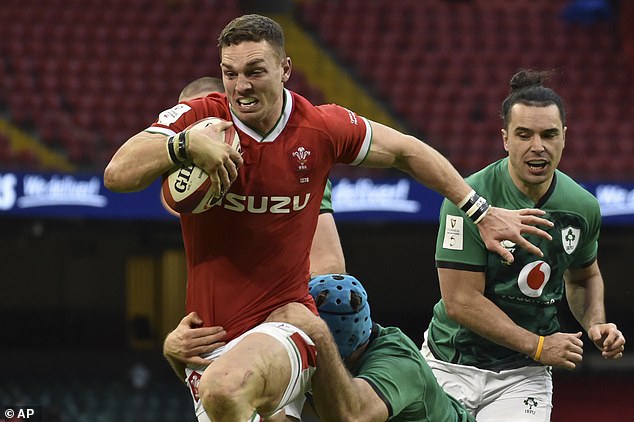 This was perhaps the most depressing Six Nations setting of the weekend with a deserted Westgate Street, where usually it would be gloriously heaving with boozing mobs of revellers, reminding us all of the times.

How the red and green hoards would have loved this battle and the wash-up in Caroline Street after.

For forget Tests lacking intensity without fans in, this was a full-blooded and brutal game from the start.

No less than four players had to be taken for HIAs, O’Mahony saw red for a horrendous shoulder-charge flush into Francis’ face, and several others had bits hanging off them by the end. 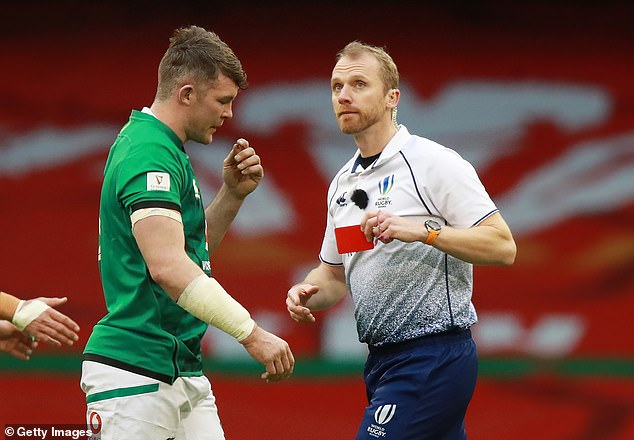 Curiously, after being reduced to 14 after as many minutes, Ireland grew with one fewer player.

They did lose James Ryan to a head injury shortly after – another savage blow – but when 6-0 down after Halfpenny had kicked two easy early penalties Andy Farrell’s fighters rose from the canvas.

Wales lost Dan Lydiate to a knee injury and saw Johnny Williams concussed so Josh Navidi, who had only played 26 minutes of rugby since August due to head injury issues, and Nick Tompkins had to go the length.

Without their famous home atmosphere the 20-odd groundsmen tried their best with plenty of oos, aahs and a few ‘go on the Sherriff!’ shouts for Ken Owens.

Ireland decided to keep it tight, rumble through the phases and force mistakes. When Navidi went off his feet in front of the posts Sexton hit Ireland’s first points from the tee just as sun started to poke through the open roof and dapple the top tier seats. 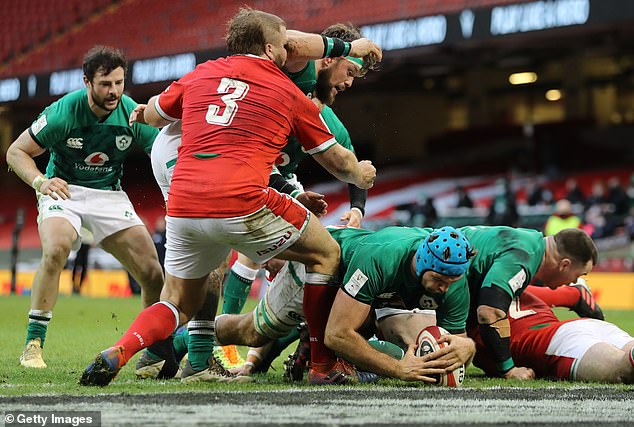 Despite being reduced to 14 men, Ireland led 13-6 at half-time thanks to a try by Tadhg Beirne

Owens and Alun Wyn Jones went about their usual national service of banging and clanging, captain Jones’ shiner – given to him by Jake Ball in training – nicely blossoming through the purples and yellows throughout.

But it was the Irish sprouting green shoots of recovery. Sexton’s second penalty was followed up by a super try – Robbie Henshaw darting through Justin Tipuric and Taulupe Faletau to set up Josh van der Flier before Tadhg Beirne dived over to score.

And with the conversion Ireland led by seven at the break and looked good for it too.

They continued in the same vein after the break as Wales made basic errors.

Until they pounced. A lazy carry and Ireland dropped outside their 22 – Tompkins leapt upon it and Wales sensed their chance.

Then on the blind-side Navidi threw a wonderful out-the-back pass to North who – now with two black eyes having minutes before been hit in the face – waded through three defenders to score his 42nd Welsh try in his 99th Test superbly.

Halfpenny missed the conversion but this was now a two-point game. 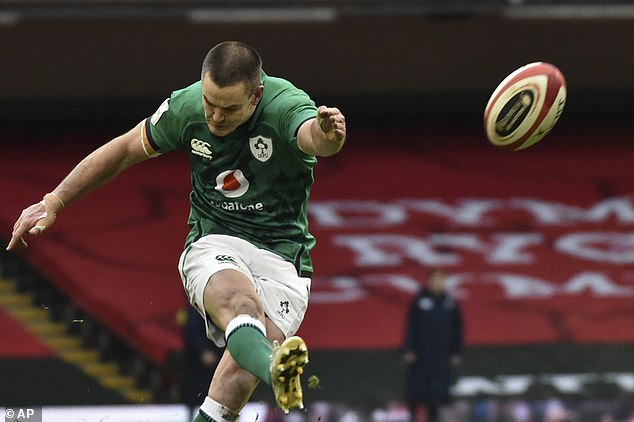 Robbie Henshaw became the third player to go off for an HIA as the hits kept coming. Then the tide started to turn. Wales, so starved of possession in the first half, scored a second in quick concession.

Two quick flicks from Tompkins and North gave Rees-Zammit a chance and the 20-year-old did wonderfully well to leap and finish one-handed in the right corner. Halfpenny hit the kick.

And when his next penalty went over, when Beirne went in at the side. Sexton then went off injured, the fourth to go off for a head check, and Dan Biggar started roaring with every other word beginning with F.

It was not over though, as Burns hit a penalty to take Ireland to within striking range with eight minutes left. It had been an epic effort from them to take it this deep with 14 men – could they raise themselves for one last score?

Beirne was the latest to need treatment, the Principality Stadium quickly reprising its role as a field hospital having only just been converted back into a rugby ground after housing Covid patients last spring.

Ireland refused to expire without a fight, keeping the ball alive until the 85th minute – but then, inexplicably Burns kicked a penalty dead, and that was that.

For Wales the battle was won, their war just begun.