Wales could secure their quarter-final place with victory over Fiji in their Pool C clash at Oita Stadium.

Warren Gatland’s side have already beaten Georgia and Australia, with a final match against Uruguay to come.

Wales make just two changes to the side that beat Australia 29-25, with James Davies and Ross Moriarty coming into the back row in place of Justin Tipuric and Aaron Wainwright.

Sportmail’s JAMES AYLES will provide live coverage of scores and updates throughout the game.

That is SO close. Shades of Mark Cueto in 2007 here. Josh Adams’ toes have flicked up in time… have they? Haven’t they?

No try. Big call. TMO Ben Skeen was definitive that it was in touch. Could be a penalty try soon though if Wales keep smashing the Fiji scrum…

A third try is referred to the TMO…

Wales make mincemeat of the Fiji pack again, Gareth Davies flings one out to Adams on the left wing but he is tackled as he races into the corner.

On-field is no try, but it’s a very marginal call. The referees are completely nonplussed with that one, but they go with on-field decision.

Back we come for a scrum. Fiji are now back to 15 men.

Wales run amok from the maul, winning a penalty but they play on and Biggar hangs a kick into the in-goal area but Parkes cannot gather the kick.

Back we go for the penalty, scrum taken.

Wales are back to their full complement and back on top.

They are putting some kicks behind the defence to test Fiji’s backs and it is working.

A reminder below of that astonishing first Fiji try…

Bit of redemption for Josh Adams there. Flattened for both tries, but now scores one himself.

Wales are on the board!

Wales finally get on the front foot, the ball comes back to Dan Biggar and his crossfield kick lands straight in Josh Adams’ arms as he falls across the line.

Silly that from Tevita Cavubati. Needless, and just when everything was going Fiji’s way. 14 v 14 now…

We are now level in numbers again, for a few minutes at least. Ken Owens is due back any time.

Cavubati is sent to the sin bin for a shoulder charge at the ruck and yet more action in this game.

Wales earn a penalty, play rolls on and Hadleigh Parkes gets absolutely flattened by Bill Mata.

back we go and Dan Biggar kicks to touch.

Utter chaos on the rugby field now. We are now checking for a dangerous clear out by Cavubati at a ruck.

Ken Owens is going through the ringer on the sidelines. He’s sitting on his own wearing a yellow bib, and is hunched, shouting obscenities every now and then.

Nothing he can do for another eight minutes or so…

An utterly mental start here. Wales are shell-shocked and Fiji are flying.

A scrum is called and Elliot Dee has to come on for James Davies with starting hooker Owens in the bin.

Extraordinary start to the game here. No try, as the pass was forward, but Ken Owens tipped Bill Mata onto his back and sees yellow. Worst possible start for Wales…

…and it is made worse, as Fiji score again!!! Kini Murimurivalu is over and Fiji are flying here!!

It goes wide to Murimurivalu and he just bundles over from close range. 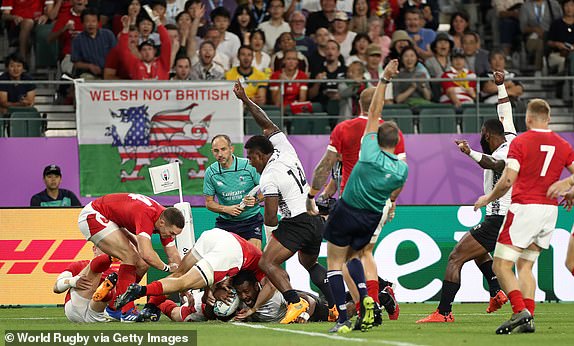 Fiji do not have a second try but they will play 14 mens for the next 10 minutes.

Volavola kicks for touch. A big opportunity for Fiji to do some real damage.

Fiji fly forwards, scrum-half Lomani takes the ball and runs over but the pass is forward.

We are now checking for foul play by Ken Owens on Bill Mata, a low tackle that tipped the back rower onto his back.

A yellow is coming for Owens.

OH MY WORD! Jos Tuisova has just flattened Josh Adams and scored an amazing try. What a start!

Have Wales leveled already?! No.

George North stole the ball on an intercept and sent Josh Navidi over, but Hadleigh Parkes had knocked on when making the tackle.

Fiji survive and have the scrum. 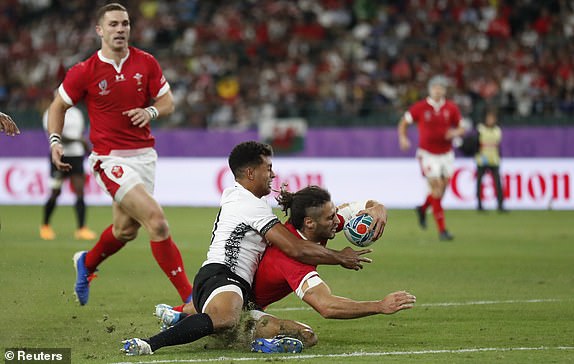 Fiji are relentless though and they come again. Nakawara at the heart of things, driving forwards and offloading easily.

What a start. Fiji earn a penalty, they have only Joshua Tuisova on the short side.

But the big wing just tramples over three Welsh players to somehow touch down in the corner. Incredible score. Howe he kept that huge frame in I do not know. 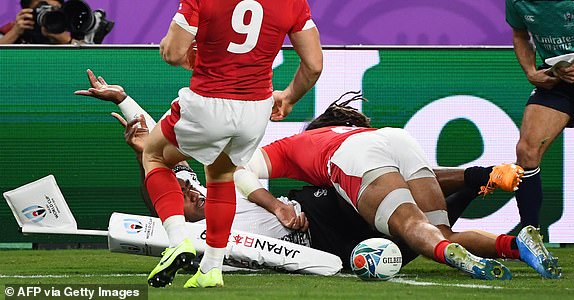 Fiji will definitely be Fiji today. Nakawara with a classic offload, Waqaniburotu carries hard but Botia’s attempted offload is into touch.

Volavola sends the ball up, George North collects, Ross Moriarty carries and away we go.

Some thoughts from the Wales camp for a quick read before we get started.

Both teams have a last huddle in the dressing room before heading out onto the pitch, Fiji belting out the traditional pre-match hymn.

More ceremony as they walk through the tunnel.

Who might produce the goods for Wales to help them book their place in the Quarter-finals?

Anthems to go and then we will be underway.

Wales know if they win, they are through to the knockouts to play either France or England back down here in 10 days time.

They have seemed confident, calm, settled and relaxed this week – but having not played for 10 days will there be some early rust?

Wales have started brilliantly in the previous two fixtures out in Japan, and will need to again here to take the stuffing out of Fiji.

Wales are used to roofed stadiums, as we know, and they aren’t too worried about a slippery night here in Oita.

There have been 47 handling errors in the two games played down in this ground so far in the World Cup – but tonight it’s a far more pleasant evening.

Today it has been 24 degrees and sunny, without a cloud in the sky, and now temperatures have dropped to 19. It’s not too humid either, so hopefully we should be in for a better night of handling. 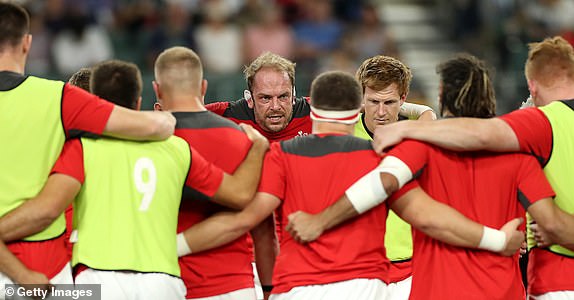 Wales make two changes, both in the back row, with Ross Moriarty and James Davies starting.

Good morning and thanks for joining me for this pool stage clash.

Wales have looked imperious so far, while Fiji bounced back from a shock defeat by Uruguay in impressive fashion.