Wayne Pivac celebrated his first game as coach of Wales with a 43-33 win over the Barbarians as Warren Gatland's return to Cardiff ended in defeat on Saturday.

Wales scored six tries but had to withstand a second-half fightback by the legendary invitational side, who trailed 33-7. 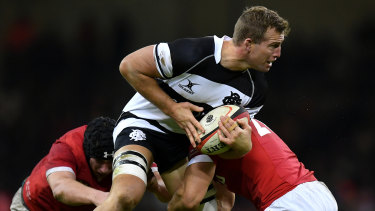 Angus Cottrell of the Barbarians is tackled by Adam Beard and Ollie Griffiths of Wales in Cardiff.Credit:Getty

Gatland was given a hero's welcome after a 12-year reign, the longest by any Wales coach, in which he led the team from the doldrums to No. 1 in the world rankings and a second Rugby World Cup semi-final last month.

But his fellow New Zealander Pivac's determination to put his stamp on Wales produced some interesting selections: Five-eighth Jarrod Evans, who missed out on Rugby World Cup selection, made his second appearance for Wales, and uncapped New Zealand-born wing Johnny McNicholl played after qualifying on residency.

Wales were sparked into life after the break and halfback Tomos Williams' quick tap penalty five minutes before half-time freed Evans to send McNicholl over. 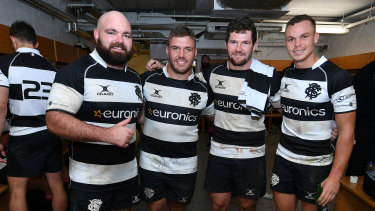 Barbarians flanker Marco Van Staden was sent to the sin bin for killing the ball, and Wales took advantage as hooker Ken Owens profited from an overthrown lineout for a 19-7 interval lead.

Van Staden was still off the field when Owens claimed his second try to earn a hug from his opposite number Rory Best, the former Ireland captain who was playing his final game of professional rugby.

The Barbarians came back with tries by Shaun Stevenson, Craig Millar and Brumbies flanker Peter Samu to add to the opener by Josh Strauss to get within seven of Wales.