The Wallabies have scored a dream 2023 Rugby World Cup pool draw after it was confirmed the men in gold will face Wales and Fiji, just like they did in the 2019 tournament, but could face England in a quarter-final once again.

In what is almost a best-case scenario for Dave Rennie’s side, Australia managed to avoid lining up against reigning champions South Africa, heavyweights New Zealand or arch-rivals England during a pool draw held in Paris on Monday evening (AEDT). 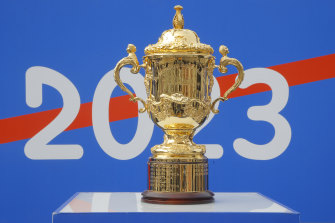 Instead, Australia will face Wales, who have lost seven of their last nine Tests and slipped to ninth in the world rankings.

However, Wales knocked off Australia 29-25 in Tokyo last year and are traditionally a tough team at World Cups. They fell to eventual winners South Africa in last year’s semi-final.

For the third World Cup in a row the Wallabies have been drawn alongside Fiji, who they beat easily in 2015 and, despite an early scare in 2019, managed to defeat 39-21 in Sapporo. Fiji are ranked 11th in the world.

Australia will also lock horns with ‘Europe 1’ and ‘Qualifier’ teams, who are yet to be determined.

However, there is a decent chance the European side will be Georgia, who the Wallabies also ran into at the most recent World Cup in Japan.

In Pool A, hosts France have been drawn alongside New Zealand and Italy, Pool B sees South Africa, Ireland and Scotland pooled together, while reigning finalists England have been pitted alongside the ever-improving Japan and Argentina in Pool D.

The winner of Pool C will face the runner-up of Pool D, meaning that if Australia finish first in Pool C and England top Pool D, the Wallabies will square off against either Japan or Argentina.

However, in the event Australia lose to Wales, like they did in 2019, there is a high chance they will once again have to come up against Eddie Jones' England outfit. 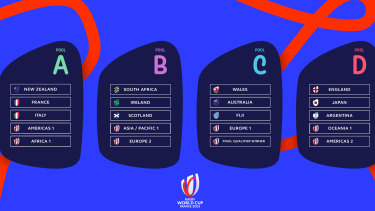 The final pools for the 2023 Rugby World Cup in France. Credit:Twitter

Under new coach Dave Rennie, Australia won just one of their six Tests in 2020 but came away with three draws, two of which came against Argentina.

The Wallabies had a forgettable 2019 World Cup despite being drawn in a favourable pool alongside Wales, Fiji, Georgia and Uruguay. They fell to England 40-16 in a quarter-final in Oita.

World Rugby decided that seedings would be done from rankings at the end of last year because of COVID-19 and a disjointed Test calendar in 2020.

The Wallabies are ranked sixth in the world but have done well to ensure that on current standings, all teams they will line-up against in 2023 are below them on the world rankings.