Is Eddie coming home? It’s a tantalising prospect, particularly given he is a one-man headline machine and has turned England into a dominant power in world rugby.

But the reality? Jones isn’t interested in returning for a role with Rugby Australia.

Sources close to Jones said the former Wallabies coach is disenchanted with Australian rugby and was wounded by the ‘traitor’ sledges at the SCG – and broader crowd abuse – when on tour with England this month. He was also stunned by the diminished public profile of rugby in Australia, even since his last tour in 2016.

There is always a danger in asserting anything as definitive when it comes to Jones, who is a master tactician. And there has long been a theory that Jones is keen to give the Wallabies job one last crack, after being sacked in 2005.

But the sporting landscape, and Rugby Australia’s finances, have changed dramatically since then and luring the wily coach back will be tougher than RA execs might expect.

Is England the next stop for Razor?

As the blame game continues in New Zealand over the national side’s shock series loss to Ireland, a potential future All Blacks head coach was far, far away from the drama … in the eastern suburbs of Sydney last Saturday.

The Cauliflower has been told by our Randwick rugby spies that Scott Robertson, a multiple Super Rugby title-winning coach, was spotted at Coogee Oval on Saturday afternoon watching the Galloping Greens up against West Harbour in the Shute Shield. Robertson also went to the Wallabies game at the SCG.

Who else was in the seaside suburb of Coogee? All the big dogs of England rugby, including chairman Tom Ilube and president Jeff Blackett, who were staying up the road at the Crowne Plaza.

Was it a Deidre Chambers-style coincidence that Robertson happened to be in the east of Sydney at the same time as England? NZR better hope so. Robertson has a get-out clause of his new contract at the end of next year and would be an obvious target for England. He was linked with the role in 2021 and said he was “flattered” to be considered.

It’s been drama aplenty across the ditch since Ireland downed the All Blacks on New Zealand soil. Ian Foster is under immense pressure to keep his job and the All Blacks communications boss has also been under fire this week for her decision to cancel a Foster press conference on Sunday, saying she wanted to keep the coach away from the dastardly media and their questions, given they were “out for blood”.

Speaking of potential blood, video has also emerged of All Black Akira Ioane and former All Black-turned commentator Justin Marshall being separated during what appears to be a late-night argument in Auckland. All Blacks winger Caleb Clarke is seen holding Marshall back. The NZR said it was aware of the “tricky situation”.

Justin in case you missed it

Justin Harrison’s phone has been running hotter than central London this week after the moving clip about his 2003 Rugby World Cup medal was screened on Stan/Nine’s Test rugby coverage, and then went viral on social media.

Harrison’s phone has pinged with alerts and messages every 10 minutes for most of the week.

Big battle of the beaches

Turinui will be on deck for commentary duties with Sean Maloney when club rugby gets a run-out on the main channel on Saturday, with the famous Battle of the Beaches clash between Manly and Warringah. Stan Sport will also screen the match.

The Shute Shield classic will have a full five-camera set-up, and all the bells and whistles. Randwick and Eastwood at Coogee Oval will also been shown on the main channel.

Students reach out to Ukraine

Sharing blue and gold colours, the Sydney University rugby club will present a jersey to Australia’s Ukrainian ambassador, Vasyl Myroshnychenko, next week as a gesture of respect and support. The jersey will be sent on to Ukrainian president Volodymyr Zelensky.

The presentation, which has been organised by Mike Clements (father of Uni fullback and Aussie sevens player Tim) and Hugh Dillon, will take place in the Main Quadrangle of the university at 1pm on Monday, July 25.

Ukrainian rugby has been just one of countless communities devastated by the Russian invasion. In March, Oleksi Tsibko, the former captain of the Ukraine rugby ream, died defending his people near the town of Bucha.

If you would like to support contribute to charities supporting the Ukrainian people, this link can assist you.

Wait for the McReight time

There has been, at various points during the last two years, a rising panic among Queensland fans that if Fraser McReight doesn’t get a sniff at Wallabies level soon, he may take off overseas and become the next Liam Gill.

It’s a difficult spot to be in, waiting behind the Wallabies captain and in a specialist position. But Wallabies coach Dave Rennie gave a pretty firm view on McReight’s plight on Thursday, after naming him in the 36-man squad for Argentina. 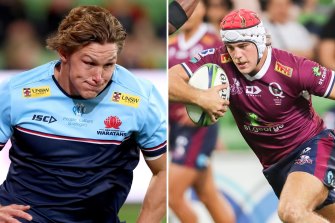 Asked if he would consider playing Michael Hooper and McReight together, Rennie indicated the more versatile Pete Samu was the current back-up No.7 and that McReight would need to bide his time.

“That’s been the value of the A program, he had three Tests against the Pasifika teams who are pretty much at full strength,” Rennie said.

“The A program is important for that. I’m loathe to give away Test caps just to keep people happy. As we’ve seen in New Zealand, people queued up for a long time behind Richie McCaw and you’ve got to earn the right to play.

“So Fraser’s been really good and his job is to play so well that we can’t leave him out and we’re picking him ahead of Hoops. It takes a bit of patience and perseverance.”

New Force coach Simon Cron is steadily adding to his squad in Perth, with Curtis Rona and Bryce Hegarty both set to line up with the WA club next year. Rona, a three-Test Wallaby, played with the Force in 2017 after switching from league and has been playing for London Irish since 2019.

Former Junior Wallabies halfback Michael McDonald, who turned down an Australia A selection, has returned to Ireland signed with Ulster.

Meanwhile, Hamish Stewart is still keen to make a move to Melbourne despite indicating to the Reds that he would stay. Stewart is keen to play more at No.10 and after joining the Reds at 17, the 24-year-old has told teammates he is keen for a change to try to realise his Wallabies ambition.

WIN the chance to be coached by a rugby legend!