Aberdeen 2-2 Rangers: Steven Gerrard’s side slip up in title race as Jon Gallagher and Andrew Considine strike for Dons after Scott Arfield and Ryan Jack had put visitors in command

For Rangers there was always the fear that long December nights away from home might end this. In deep and bitter disappointment and the sense that a valuable two points had been lost.

With half an hour played here Steven Gerrard’s team were in cruise control. Had it been a boxing match referee John Beaton would have called a halt to the action to prevent further damaging blows to Aberdonian pride. Goals from Scott Arfield and Ryan Jack looked like the prelude to a rout.

Jon Gallagher’s first Aberdeen goal before half-time felt like the flicking of a switch. A rejuvenated Dons side levelled through Andrew Considine three minutes into the second half, top scorer Sam Cosgrove blowing a glorious chance to win all three points. 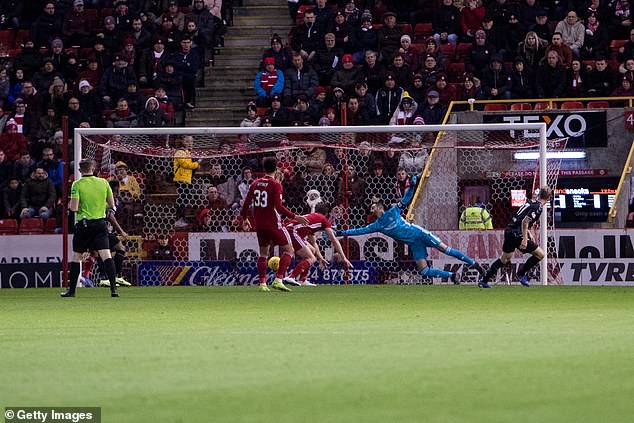 News of Celtic’s 92nd minute winner at Parkhead did nothing to ease the mental angst of Rangers. Neither, for that matter, did the decision of Beaton to deny them what Gerrard called a ‘blatant’ penalty kick for Lewis Ferguson’s trip on Alfredo Morelos 17 minutes from time on the 18-yard line.

Perfectly placed the referee gave a free kick instead and offered an apology to the Rangers manager after the match.

A recent humiliating 5-0 loss at Ibrox was the lowest point of the Derek McInnes era. Swiftly followed by the loss of four goals to Celtic at home in the first half of a humbling 4-0 defeat Aberdeen needed to show they could still compete and last night they did. Unbeaten in their last six, one defeat in their last eight is a vindication for Aberdeen’s manager. Last night, at least, the critics fell silent.

Yet, for half an hour here they were screaming blue murderr. Gerrard’s team wrapped themselves round a weak and vulnerable victim and squeezed tight.. Goals from Scott Arfield and Ryan Jack left the home team gasping for breath, the movement and invention threatening another embarassing rout. 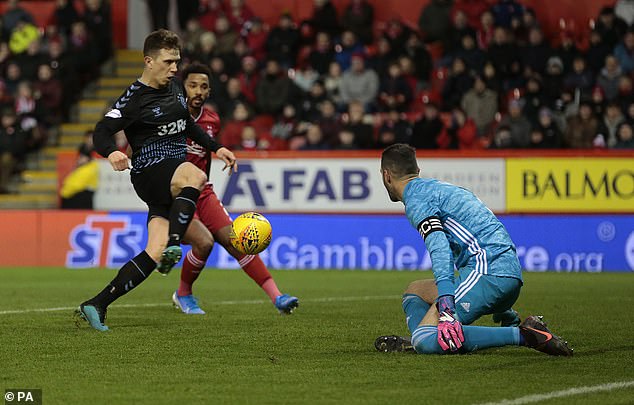 Since losing to Celtic the Dons had won four and drawn one. Yet in those opening stages Aberdeen were brushed off the ball easily. They couldn’t keep the ball and on the occasions when they did they gave it straight away. Ibrox skipper James Tavernier was struck by a pie thrown thrown by a Dons supporter in the south stand and that was as close as anyone wearing red came to laying a glove on the visitors.

It’s said often enough that goals change games. And from Aberdeen’s first joined up attack of the match Jon Gallagher’s first strike for the Pittodrie side offered McInnes and his side an unlikely lifeline before half-time.

In a remarkable turnaround they were level three minutes into the second period, Andrew Considine’s fourth goal of the season transforming the game completely. Unexpectedly, dramatically, we had a game on our hands. 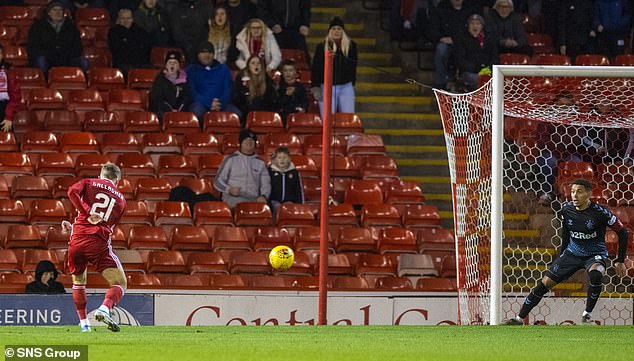 The Rangers opening goal came after 18 minutes. The wonder was it took as long. With ten minutes gone it needed a strong save from Joe Lewis to stop Alfredo Morelos when the ball was caught under the feet of Greg Leigh’s feet.

Jon Gallagher’s poor touch 30 yards from his own goal was picked off by Joe Aribo. The midfielder fed James Tavernier on the right flank and the captain’s low cross was tucked superbly into the net by Scott Arfield.

An air of panic seemed to envelope Aberdeen. Flailing to get to grips with quick, high tempo opponents start top scorer Sam Cosgrove made so many risky challenges he should have been booked long before he finally was. Shay Logan’s dangerous challenge on Joe Aribo was reckless. What aggression they had was channelled in the wrong way.

It came as no surprise when Rangers doubled their lead on the half hour. Once again the goal was far too easy from Aberdeen’s perspective. 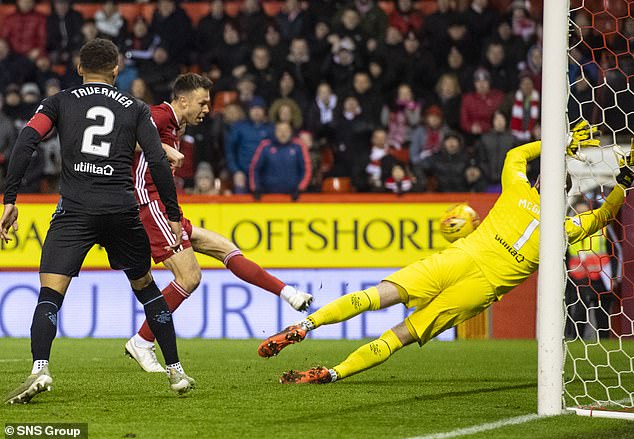 Ryan Jack took the ball off a weak Greg Leigh in his own half feeding former Dons captain and local boy made good Ryan Jack. The simplest of passes teed up time and space for a Morelos drive at goal and as Joe Lewis spilled it Jack was on hand to thump the ball low into the net before disappearing into a sea of jubilant away supporters. For a time you feared he might never reappear.

Outwith a hopelessly ambitious long range effort from Lewis Ferguson Aberdeen had offered nothing in attack. All of which endowed their resurrection either side of half-time with the qualities of Lazarus.

To say the first goal came from their first decent, intricate passing move would be no exaggeration.

James Wilson, playing wide on the right, played a one two with Lewis Ferguson and rolled the ball into the path of on-loan Atlanta midfielder Gallagher to surge into the area with a decent touch. As Allan McGregor raced from his line to meet the danger the number 21 was dragged wide but managed to turn a left foot effort into the net despite the efforts of Tavernier to block with his chest.

Half-time offered a chance for Derek McInnes to regroup. Despite being outplayed for two thirds of the first half the message was loud and clear. His team were still in it. They were still in the game. 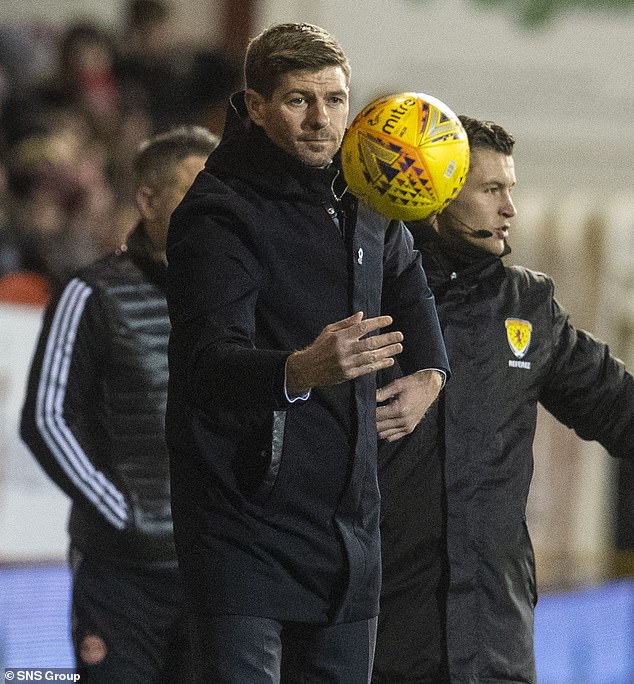 Three minutes into the second period they were level. Shay Logan’s long throw was hooked into the mixer by Lewis Ferguson. Sam Cosgrove managed to turn a low shot towards goal, a deflection teeing the ball up perfectly for 500 game man Andrew Considine to thump into the net from close range to delirium from the home support.

From almost nowhere the game was transformed. The confidence glaringly absent from Aberdeen’s play as Rangers bossed the game was now flowing.

There was a wonderful chance to complete the turnaround after 70 minutes. As Sam Cosgrove rose unhindered to meet a corner kick in a crowded area he looked odds on to head Aberdeen into the lead. Little wonder he held his head in his hands as he managed to screw a downward effort into the ground and wide.

Rangers were justified in feeling they, too, should have won the game. Beaton acknowledged his error when he awarded a free-kick rather than a penalty when Morelos was caught by Ferguson right on the edge of the area after 73 minutes. James Tavernier blasted his free-kick into the wall. Chances are he’d have scored the penalty.

There was another opportunity to snatch it in the final minutes, Ash Taylor catching Morelo outside the area and Joe Lewis producing a fine two handed stop as Tavernier’s 20 yard free kick threatened to dip under the crossbar.