Report as England make it two wins from two matches in Group I of World Cup qualifying, thanks to Harry Kane’s first-half header and Mason Mount’s lofted finish after the break. England stay top of their group and face Poland at Wembley on Wednesday

Harry Kane scored one and set up another on his return to the starting XI, as England beat Albania 2-0 in Tirana to maintain their position as Group I leaders in World Cup qualifying.

The England skipper had been forced to watch on from the bench as his team-mates thrashed San Marino at Wembley on Thursday but he made his presence felt in this trickier contest, directing a fine header home just before the break before teeing up Mason Mount to add a second.

Gareth Southgate’s side weren’t at their fluid best against well-organised opponents but came through to earn a deserved victory ahead of their clash with Poland at Wembley on Wednesday, which should be another step up in difficulty.

Elsewhere in the pool, Poland take on Andorra, and San Marino host Hungary later on Sunday.

How England found a way through in Albania…

After producing a fizzing first half against the world’s lowest-ranked side San Marino, England were frustratingly disjointed in the early stages on a stodgy pitch in Albania.

John Stones sent a header over the bar on 10 minutes but a sloppy pass from Mount led to Myrto Uzuni shooting wastefully off target at the other end. When Kane crashed a free-kick into his team-mate Harry Maguire on 22 minutes, it rather summed up England’s start to the match.

It took Southgate’s side 33 minutes to register a shot on target with a long-range effort from Kyle Walker but it eventually clicked for the visitors on 38 minutes, when Mount cushioned the ball back for Luke Shaw to clip a cross into the box, which Kane masterfully headed home. The England skipper, who had gone six games without finding the net for his country, should have made it 2-0 moments later, when he crashed a half-volley from Raheem Sterling’s cross against the underside of the bar from six yards out.

A combination of Albania goalkeeper Etrit Berisha and the woodwork then denied Phil Foden shortly after the interval.

England weren’t to be denied a second, though, and with Kane turning provider, Mount lifted a smart finish over Berisha on 63 minutes to put the visitors in control. 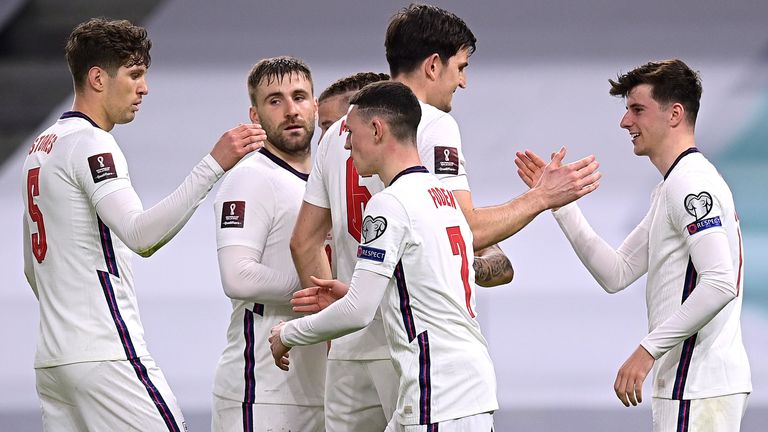 James Ward-Prowse came on for Kalvin Phillips with 20 minutes to play and was immediately involved in the action – and a bizarre moment which left Kane perplexed.

Ward-Prowse bent a cross to the back post where, after a mis-control, Sterling rolled the ball into the six-yard box. Kane lunged for the ball between two Albanian defenders and diverted the ball wide but, with his opponents clutching their legs, the striker was shown what appeared to be an extremely harsh yellow card.

England failed to muster another effort at goal until injury-time, when Kane’s drive was deflected behind for a corner, and there was a late scare from Nick Pope, whose kicking had been hit and miss throughout, when he fired straight at an Albanian forward before an offside flag spared his blushes.

But Southgate will see the victory as ‘job done’ for his side, who move on to the tougher task of Poland next week.

England host Poland on Wednesday at 7.45pm in their next World Cup Qualifier.