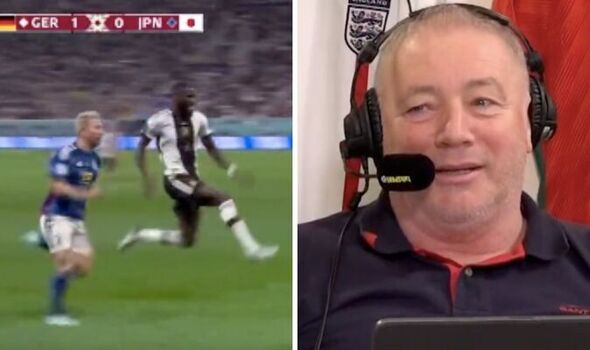 Ally McCoist has hit out at Germany defender Antonio Rudiger after he needlessly mocked Japan before his on-field antics later came back to haunt him as the Asian underdogs pulled off another stunning World Cup upset. Hansi Flick’s side were cruising at 1-0 up as they went in search of a second goal but their lack of cutting edge in front of goal meant they were never truly out of sight.

Jamal Musiala, Serge Gnabry and Ilkay Gundogan all had golden opportunities to put Germany 2-0 up but Japan goalkeeper Shuichi Gonda stood tall to keep his side in the game.

But there was one brief moment in the second half that really stood out to McCoist as Rudiger needlessly taunted Japan goalscorer Takuma Asano – prior to his brilliant winner – by kicking his legs high as he shielded the ball out of play.

There was a certain level of arrogance about the gesture that eventually helped motivate Japan to turn things around with a breathtaking late comeback.

McCoist, who was working on commentary for ITV during the game, has now called out Rudiger after his behaviour came back to bite him and his nation.

“I’ve got to say, I don’t know if you saw big Rudiger at 1-0, he outpaced somebody then gave it the big high horse kicking legs,” the Scotsman told talkSPORT Breakfast.

“I just thought to myself ‘there is something beautiful about it.’

“I really, genuinely wasn’t caring who won that particular game. I was looking forward to a good game but at the end of it, it was brilliant to see Japan win – it really, really was.

“I’ll tell you what Al [Alan Brazil], they are up against it now Germany. Their next game is Spain, I think.”

Japan substitutes Ritsu Doan and Asano both scored from the bench as Hajime Moriyasu’s side punished some late sloppiness via some inspired changes from the bench.

It was no less than the underdogs deserved having looked a real threat on the counter-attack for all of the match.

Former Liverpool and Germany midfielder Didi Hamann was also unimpressed by Rudiger’s behaviour – claiming he was belittling Japan for no apparent reason.

Hamann said: “Rudiger lifts up his legs and do you know. You don’t belittle the opposition [like that] because it always comes back at some stage.

“The spirit of the game is about respecting the opposition, respecting your opponent. And he didn’t do it. I’ve got no explanation or excuse for it.”