Manchester City had just recorded their 16th consecutive win in all competitions – extending the new all-time record that they set in midweek – and moved seven points clear at the top of the Premier League table with a game in hand.

And yet, it did not seem inappropriate for the first question of Pep Guardiola’s post-match press conference to be about Liverpool.

Even though the win at Anfield a week earlier had all but ended the champions’ title defence, and even though City had started the day 10 points clear of Jurgen Klopp’s side, Guardiola spent the hours before Saturday’s win over Tottenham watching events at the King Power Stadium with great interest.

And despite Liverpool’s stunning late collapse, he was impressed with what he saw.

“It’s the same Liverpool that I met in the last years,” he insisted. “The quality they play – doing what they did against Leicester, who were almost not able to pass the halfway – it’s still there.” 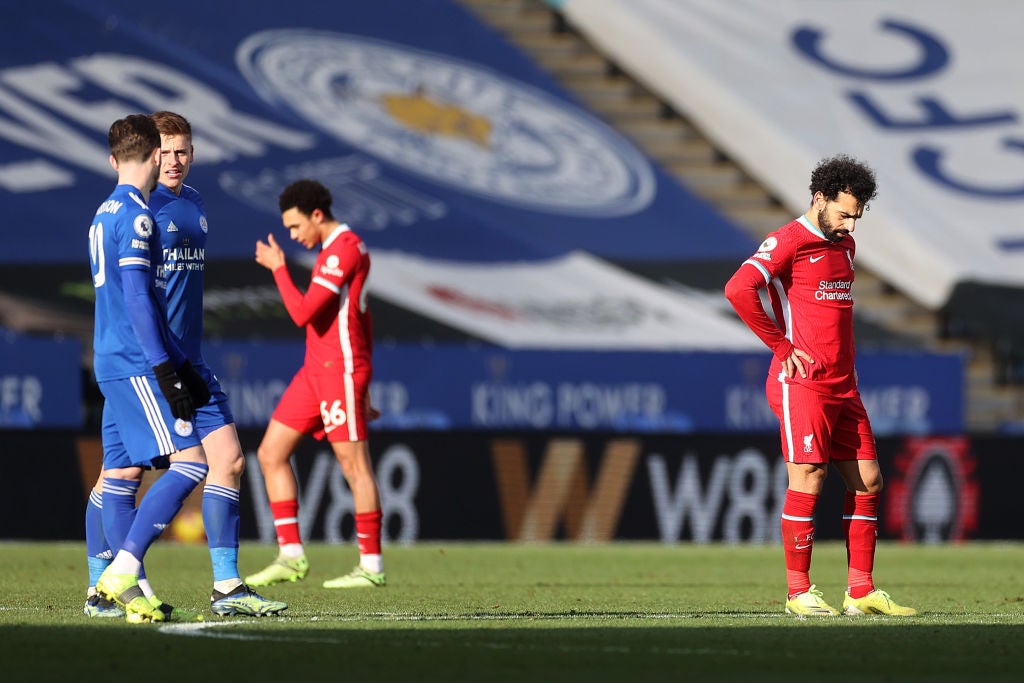 Trent Alexander-Arnold and Mohamed Salah react after conceding against Leicester

There is one crucial difference though, in Guardiola’s eyes. “They are not so clinical as they were before,” he added. “Football is ‘boxes’. Sometimes you have a period where you have to create more and more to score a goal and every time they arrive they score a goal.

“Football is a mood, a feeling, not tactics sometimes. Every team lives this period sometimes but the quality of the team is still there.”

He was speaking from experience. This time last year, City’s hopes of retaining the title were similarly dead in the water. In fact, there are several eerie similarities between that team and this season’s Liverpool.

For one, the loss of several key players to long-term injuries put City on the back foot.

By far the biggest issue was at centre-back, where the loss of their best all-round defender to a serious knee problem during the first few weeks of the campaign had revealed the folly of risky decisions taken in the summer transfer window.

Barely a week went by in those first few months of last season without Guardiola fighting new fires within his squad. They were soon struggling to match the relentless pace of a runaway leader, who were by far and away the best team in the league.

And City were also suffering from the precise phenomenon that Guardiola described as Liverpool’s problem on Saturday – that sense that while one team has to create many chances to score, their opponents only need to get lucky once.

For Guardiola, those days often came against Tottenham.

READ MORE: Liverpool left in crisis of confidence and identity after Leicester defeat

Saturday’s 3-0 win ended a run of three league games without a victory against Spurs. Last season’s two meetings at the Etihad and in north London produced a shot count of 49-6 in City’s favour, yet they took just one point and lost by an aggregate score of 4-2.

On other days, like in the pair of defeats against Wolves or Manchester United’s win at the Etihad, City would fall victim to short, intense periods of conceding several goals in the way Liverpool did at Leicester.

There are differences as well as similarities.

City never suffered a run of form last season that was as bad as Liverpool’s current two wins and five defeats in 10 league games. Poor results would pop up every now and again for Guardiola. Klopp is having to contend with sudden, sharp decline.

There is a case, though, to say that for this season’s Liverpool, read last season’s City. The question for Klopp is whether he can inspire the revival that Guardiola has overseen in the time since.

Guardiola himself would seem to think so. Though it was hard to take him seriously with his claim that Liverpool could still challenge City this season, his insistence that they are merely going through a difficult period was genuine.

“I don’t think they’ve dropped the quality of the press, the quality of the play,” Guardiola said. “They always create more than the opponent. I don’t like to suffer [against] them but as a spectator, I always enjoy watching Liverpool play football.”

These are difficult times at Anfield, with little comfort to be found as their title defence unravels dramatically. Yet if anyone knows when a quality team is suffering and partly because things simply are not going their way, it is Guardiola.