Socceroos coach Graham Arnold says he will lobby Australian football chiefs to bring forward the start of the A-League Men’s season this year to get his players match fit before the World Cup in Qatar.

Speaking on Nine’s Wide World of Sport on Sunday, Arnold said he needed as much time as possible to assess players to pick the strongest squad for the tournament, which begins on November 21. 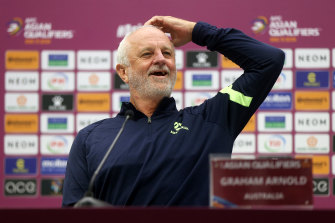 Socceroos coach Graham Arnold wants as much time as possible to select Australia’s team for the 2022 World Cup.Credit:Getty Images

“That [starting the season early] is something I’ll speak to James Johnson and Danny Townsend about this week because we need the players fit,” Arnold said. “I need to be able to see players to select…it takes a good five to six weeks to get started in a new season.”

The A-League season traditionally gets underway in mid-October. Disruptions due to COVID-19 caused the start of the 2020-21 season to be postponed to late December, while the 2021-22 season just finished kicked off last November.

Arnold was confident Football Australia and A-League executives would support his request. “I’m sure we will get the support from them”.

The A-Leagues have been run by the Australian Professional Leagues (APL) since 2021 after Football Australia handed over control to the clubs. 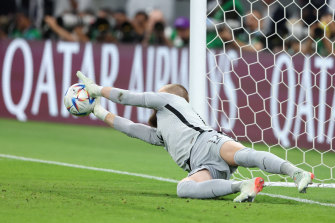 Socceroos goalkeeper Andrew Redmayne penalty save that landed them a spot in the 2022 World Cup.Credit:Getty

Arnold revealed his decision to bring on goalkeeper Andrew Redmayne for the penalty shootout in the play-off against Peru last week had been planned for weeks leading up to the match. The risky ploy paid dividends when Redmayne saved the crucial spot-kick to bookthe Socceroos’ ticket to Qatar

“It was pre-planned of course,” said Arnold, who explained that he and goalkeeping coach John Crawley had spent 10 days leading up to the match analysing Peru’s penalty-takers.

“It [putting Redmayne on the field] was just a one-percent [play] to get into the Peruvians’ minds, of why we would do that .. because they must have thought straight away, ‘Oh this guy must be special at saving penalties’.”

Australia will be in Group D alongside Denmark, France and Tunisia. Arnold said his team would be going into their first game against France to win.

“I was in Russia in 2018 [World Cup] in the grandstand and I felt that we didn’t try to win the game against France, we tried not to lose it.”

Liverpool are set to be champions even if season DOESN'T finish