Much like his frizzy-haired look-alike David Luiz, Arsenal’s young midfielder Matteo Guendouzi demands attention. He is a player of true promise, who stamps his personality all over a football match.

Yet Guendouzi is only 19-years-old and he retains the exasperating capacity to veer from the sublime to the absurd at a moment’s notice.

This was the case on an evening that seemed to be going swimmingly for the young Frenchman. 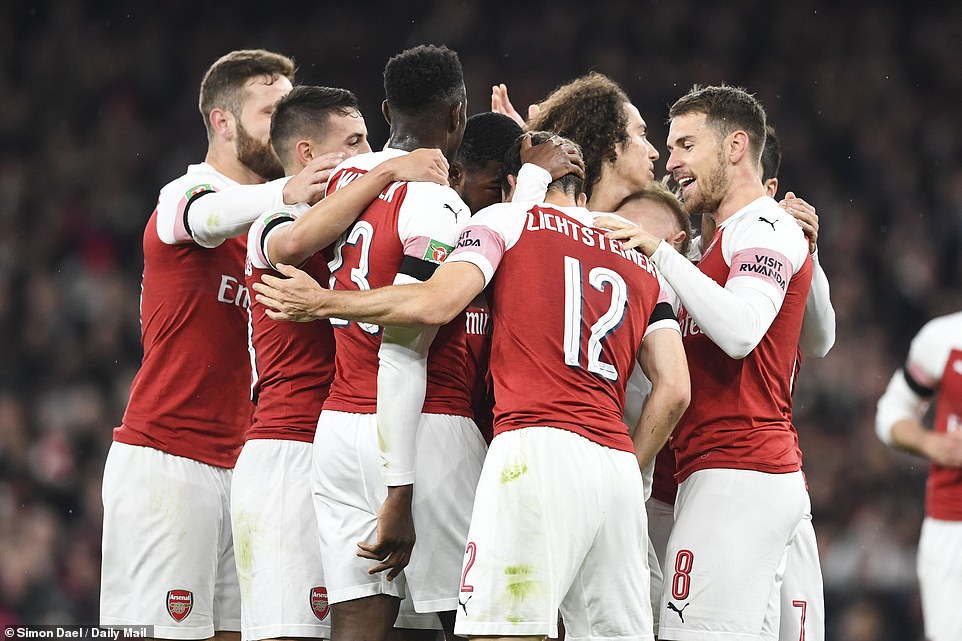 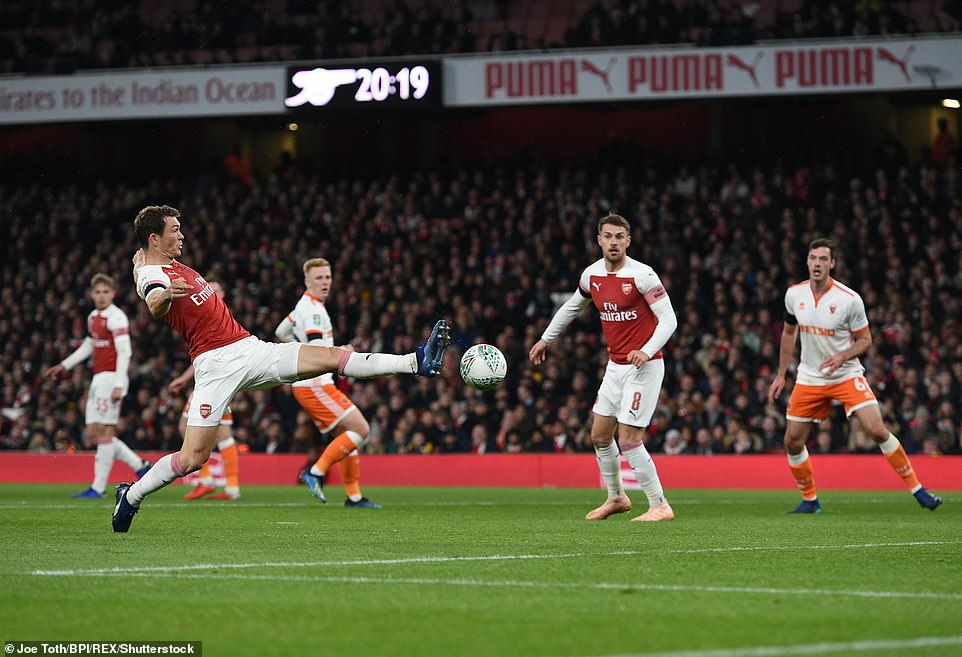 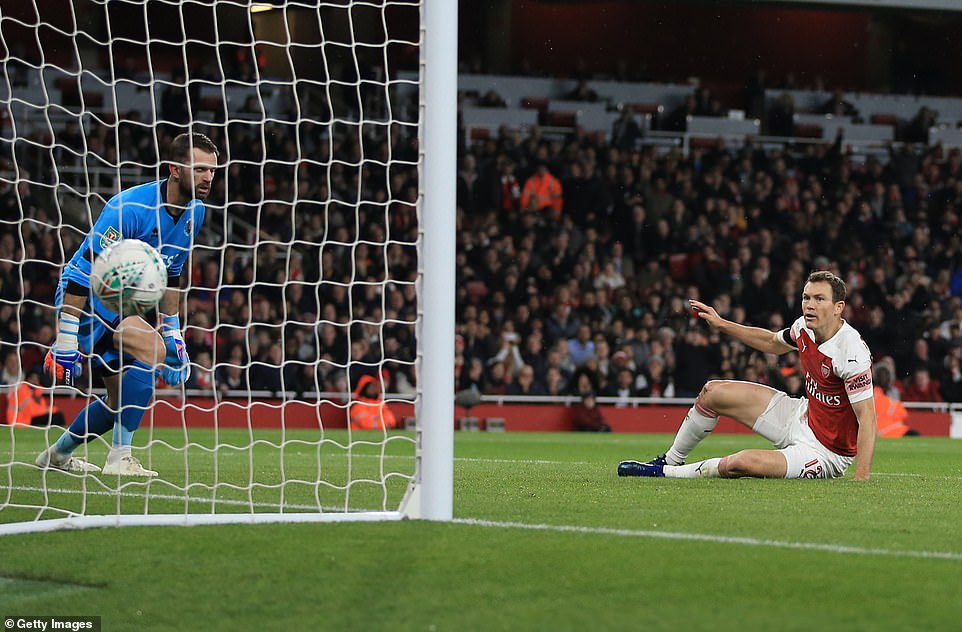 Lichtsteiner, scoring his first ever goal for Arsenal, directed the ball into the corner of the net to give his side the lead 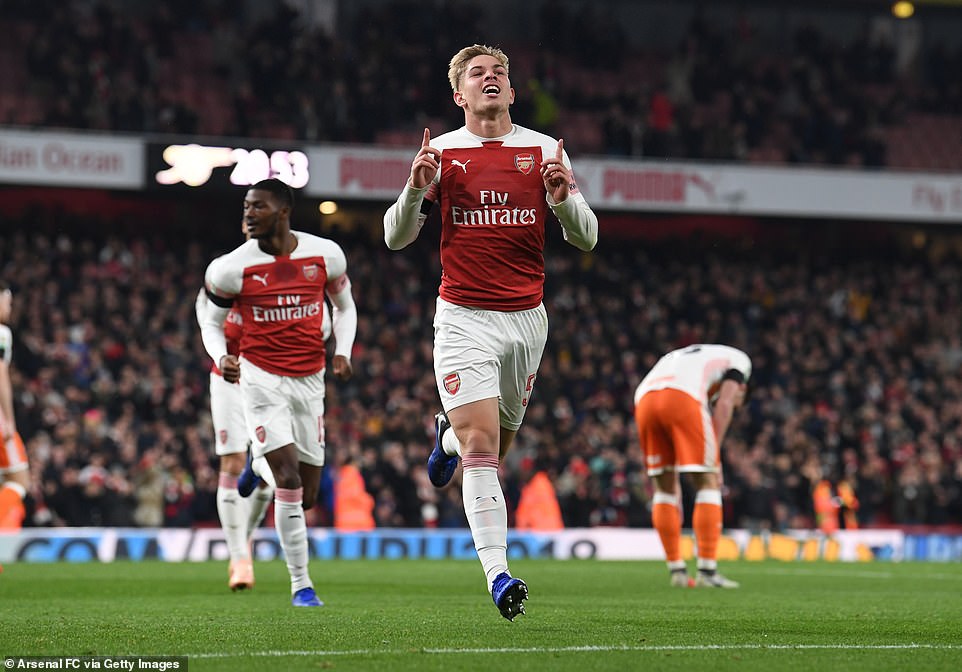 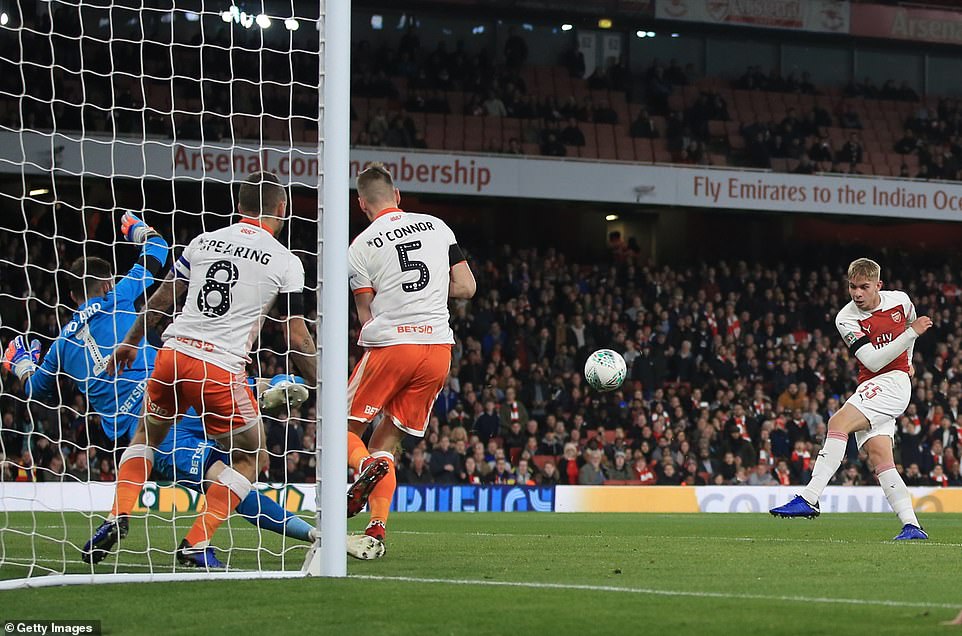 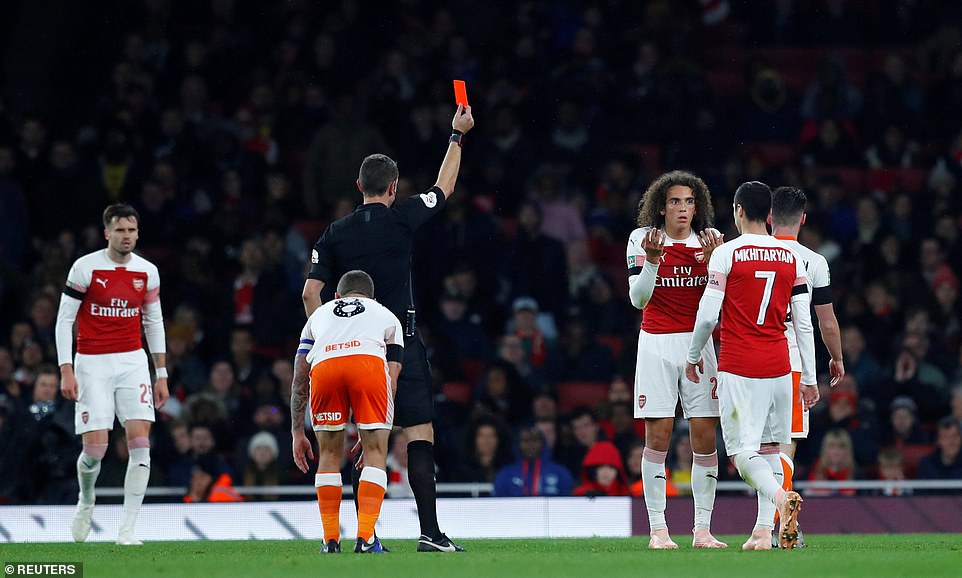 As Arsenal laboured for a breakthrough, it was Guendouzi who seized the initiative, picking the lock with a delightful pass to create Stephan Lichtsteiner’s opening goal.

Having already been booked for a hack at Jordan Thompson in the first half, Guendouzi needlessly placed his hands across the path of the same player as the Blackpool midfielder pursued a flick on.

All of a sudden, Arsenal’s breeze hit turbulence. Blackpool turned up the heat and Emery felt compelled to introduce his safety net in Lucas Torreira. Even the Uruguayan’s presence did not stabilise Emery’s side, as Paudie O’Connor rose at a set-piece to half the deficit on 66 minutes.

They very nearly equalised moments later, as Petr Cech’s discomfort in possession remerged and he was dispossessed in his own penalty area only to be spared by an offside flag.

Indeed, Blackpool continued to threaten, pressing a jittery Cech at every opportunity. Yet their goalscorer O’Connor then let Arsenal off the hook, lunging in high and recklessly on Pierre-Emerick Aubameyang and receiving the second red card of the game.

In truth, this was a peculiar evening all round for Arsenal. They won the game but this was a performance pockmarked by imperfection.

For 33 minutes, this was as laboured and ordinary as anything we have seen from Arsenal under their new manager. On the touchline, Unai Emery was a fidgety presence, flapping his hands and shaking his head as he grew exasperated at his side’s meandering tempo.

Perhaps a little tuning was always to be expected after Emery made nine changes from the draw against Crystal Palace on Sunday.

A generous home tie against third-tier opposition allowed Emery to blood the young defender Julio Pleguezuelo and the bright midfield pair of Guendouzi and Smith-Rowe. There was room, improbably, for Carl Jenkinson, one of the remaining waifs and strays of the Arsene Wenger era. 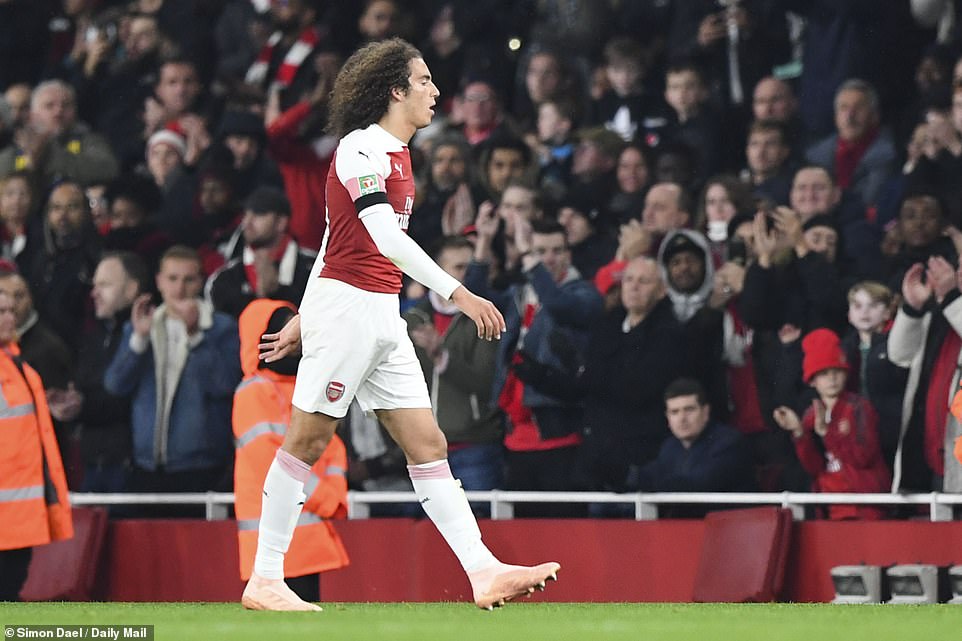 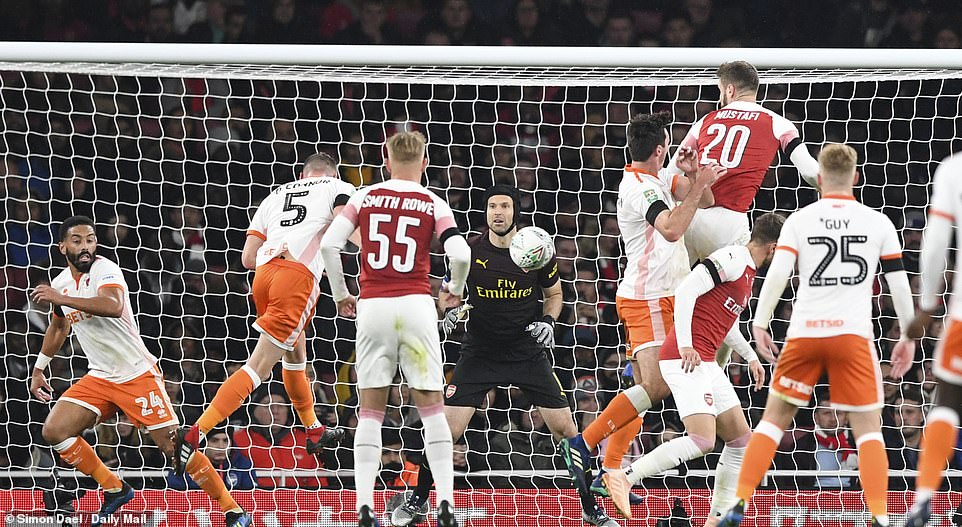 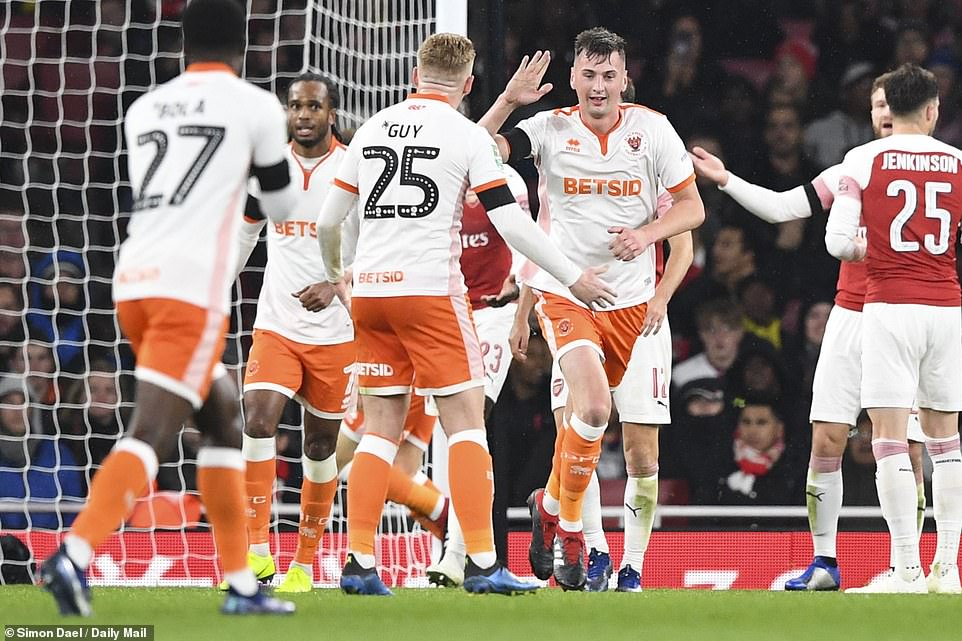 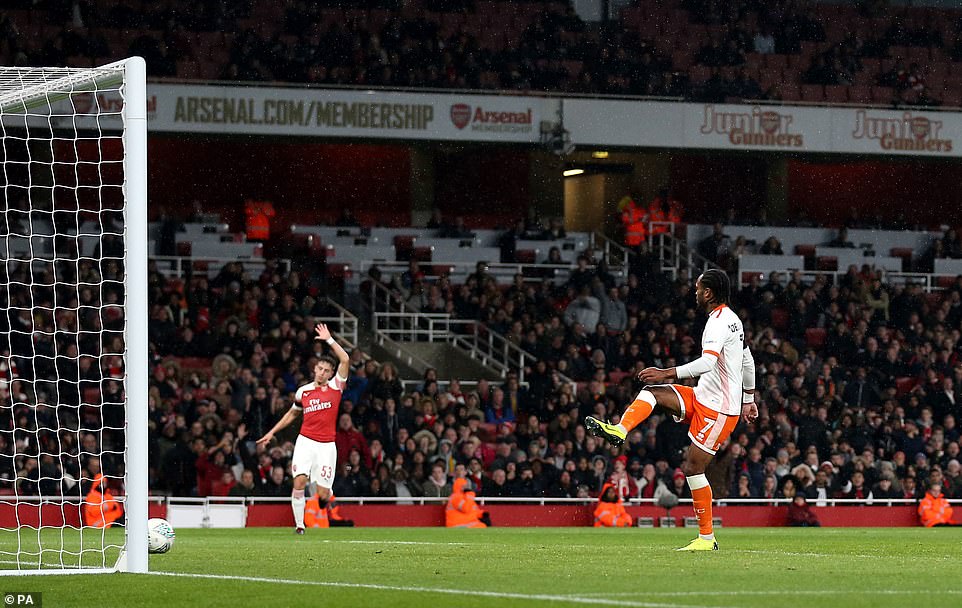 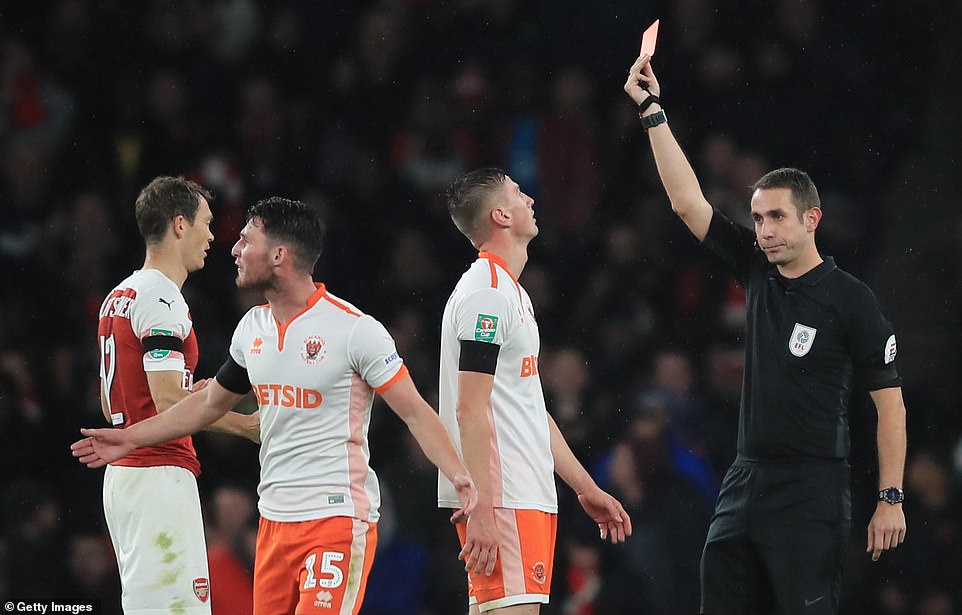 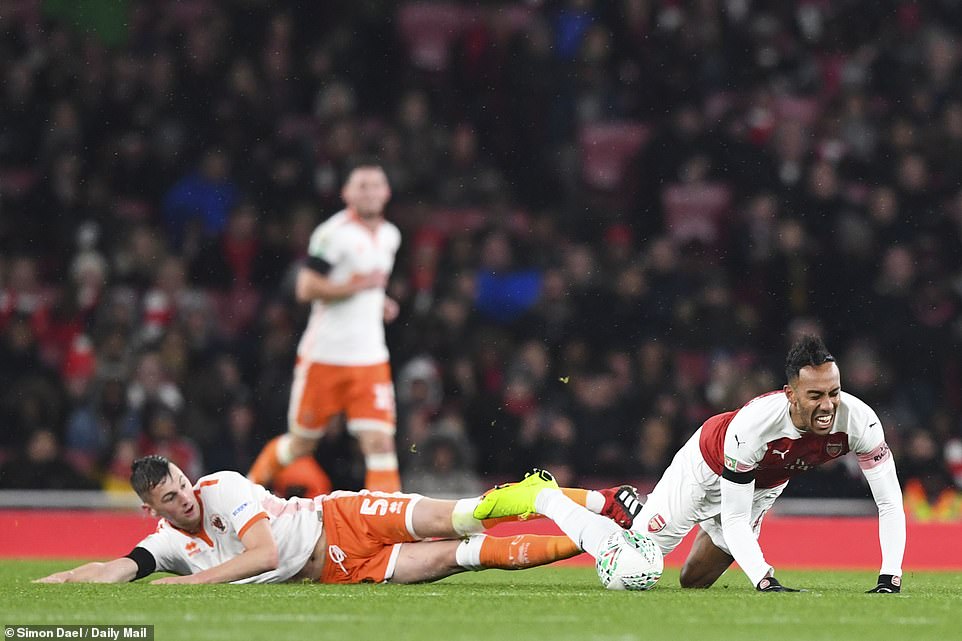 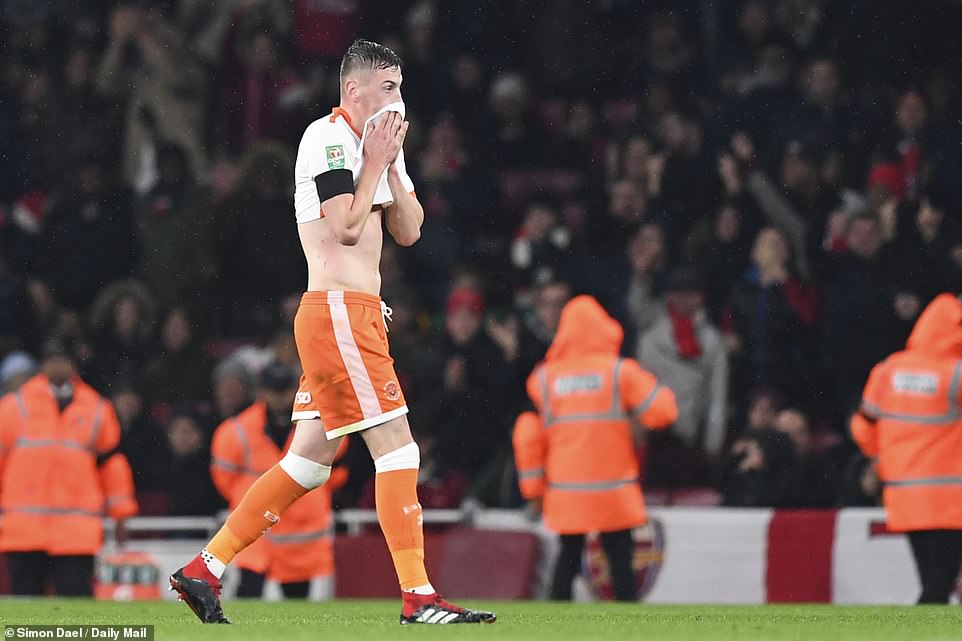 Leicester or Southampton vs Manchester City or Fulham

Remarkably, 701 days have passed since Jenkinson’s last appearance in an Arsenal shirt in November 2016 and it showed during a sluggish start to the game down Arsenal’s left side.

He was not the only one to toil. Until Lichetsteiner broke the deadlock, Blackpool appeared eminently comfortable. Arsenal did not carve a chance of note and did not hit a strike on target for the opening half-hour.

For all the rotation, this was still an Arsenal starting XI that has made a combined 1,062 Premier League appearances and, fleetingly, we wondered whether Emery may be exposed to the peculiarities of English cup competitions.

Indeed, Blackpool started with the greater menace, creating a series of half-chances. Liam Feeney’s teasing ball needed a smart clearance as defender Ben Heneghan closed in. Guendouzi then made an important intervention when Nathan Delfouneso wriggled free in the penalty area.

Delfouneso, a former Premier League striker at Aston Villa, caused consternation in the Arsenal backline with his movement and trickery. He deceived a flat-footed Shkodran Mustafi, who required a muscular rescue act by Lichtsteiner.

Lichtsteiner’s instincts would prove important at both ends. As Arsenal probed for a way through, chances were rare. Welbeck teed up Henrikh Mkhitaryan, who scuffed a low strike wide of the post. Jenkinson broke in behind but shanked a cross straight out of play. It was that kind of game. Emile Smith Rowe jinked his way into the penalty area but Oliver Turton stood his ground, made the challenge and earned a goal-kick. 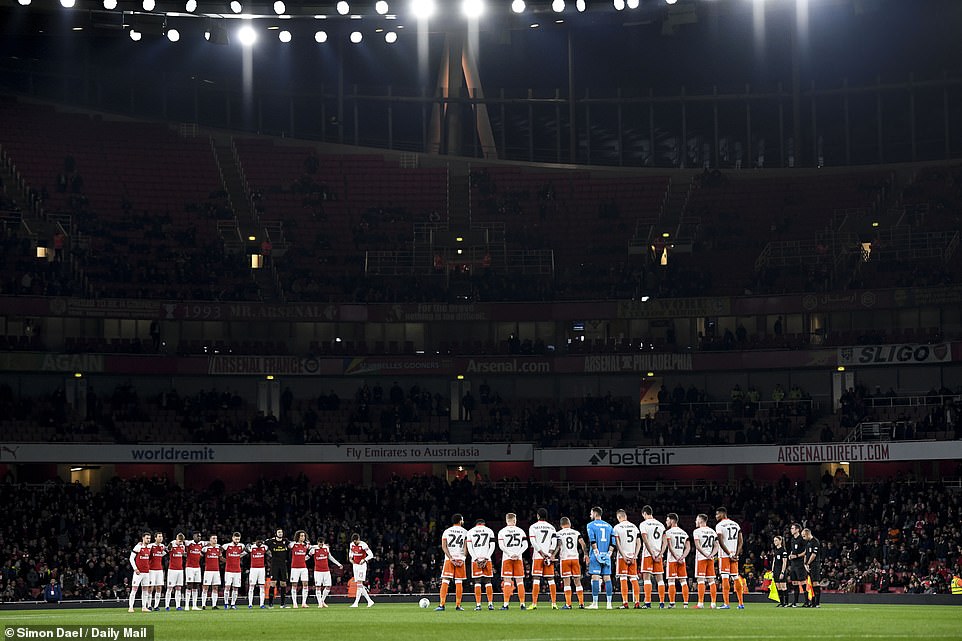 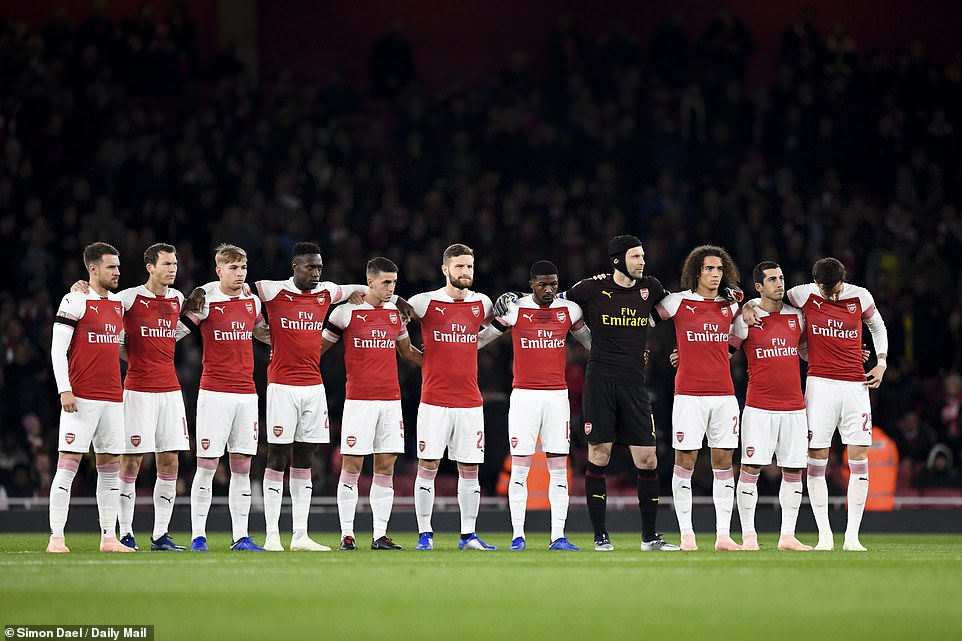 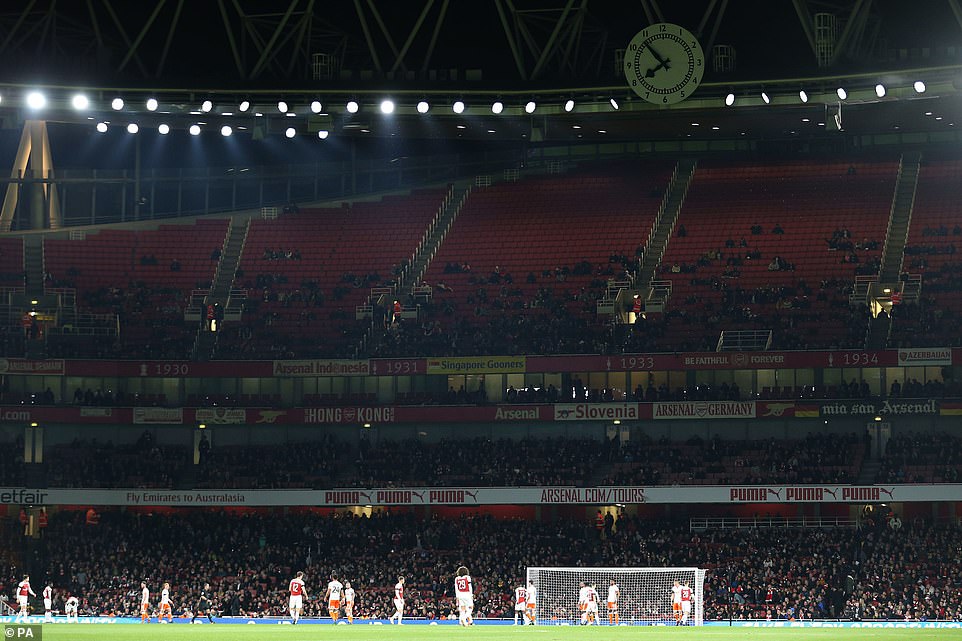 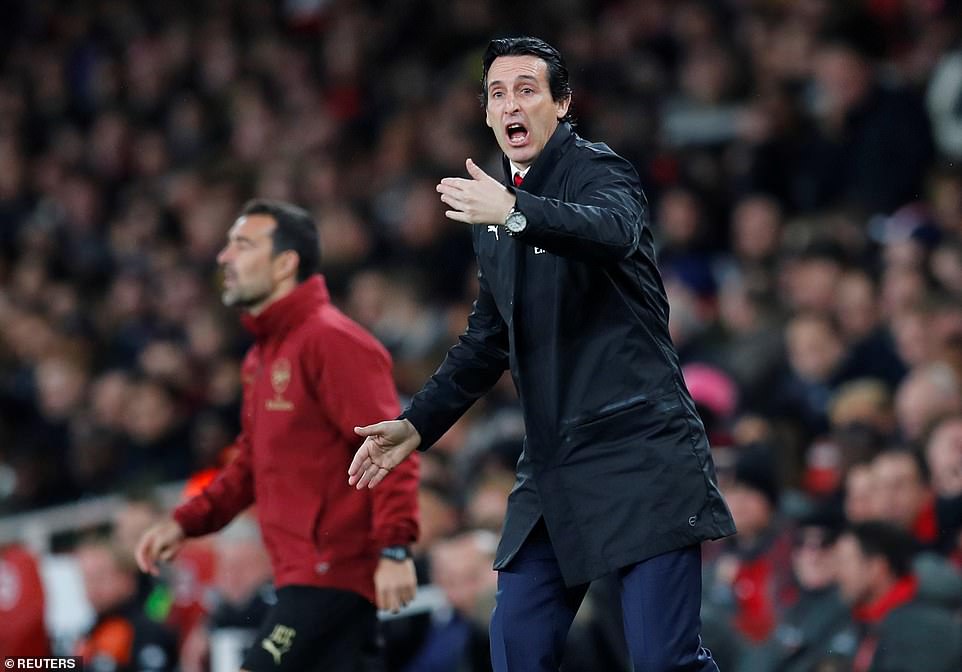 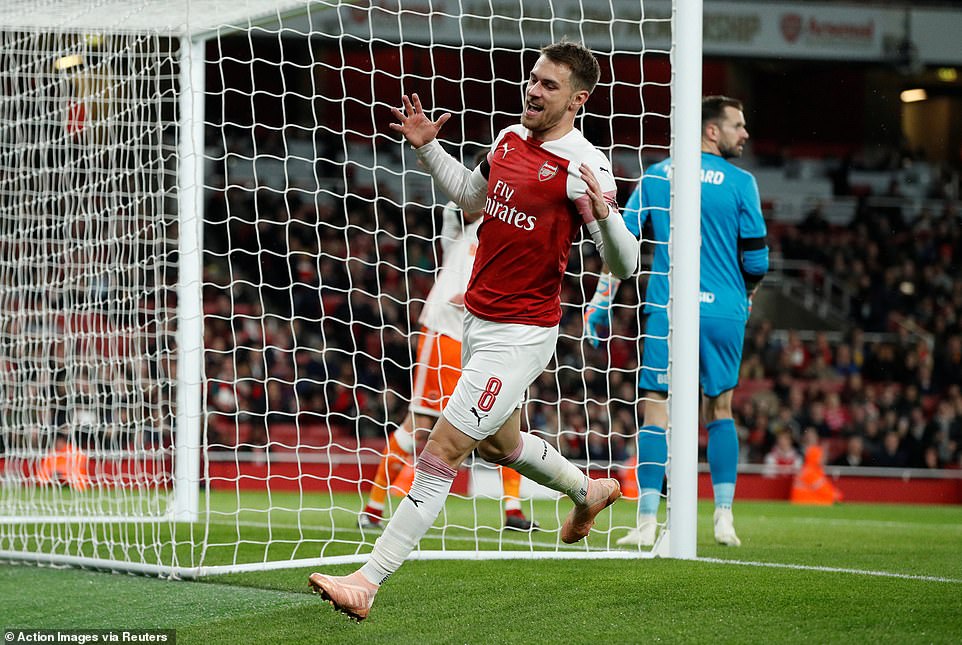 Yet Arsenal’s class finally emerged. Guendouzi was afforded time and space 30 yards from the goal. The Frenchman then demonstrated his rare talent. He glanced up and delicate clipped a pass that deceived the Blackpool defence and Lichtsteiner dived in and poked out a leg that was sufficient to wrong-foot goalkeeper Mark Howard.

The lead was not particularly deserved and it felt rather cruel on Blackpool’s positive and organised display. Blackpool have endured a torrid few years under the stewardship of the Oyston family, sinking from the Premier League to League One.

Drained of hope and money, the once proud club of Jimmy Armfield and Stanley Matthews has been reduced to a basketcase of an institution, compelled to train at a local amateur outfit as Blackpool’s Squires Gate training ground does not possess hot water or electricity.

Manager Terry McPhillips has, at least, restored a sense of pride amid the discontent and his team resembled one that has lost only two league matches this season. Yet the quality gap inevitably told. Arsenal stepped through the gears. Welbeck’s curling cross located Aaron Ramsey, who stabbed over and Jenkinson’s cross was flapped into the path of Smith-Rowe to double the advantage.

Yet Guendouzi then intervened and in the end, Arsenal were fortunate to survive. 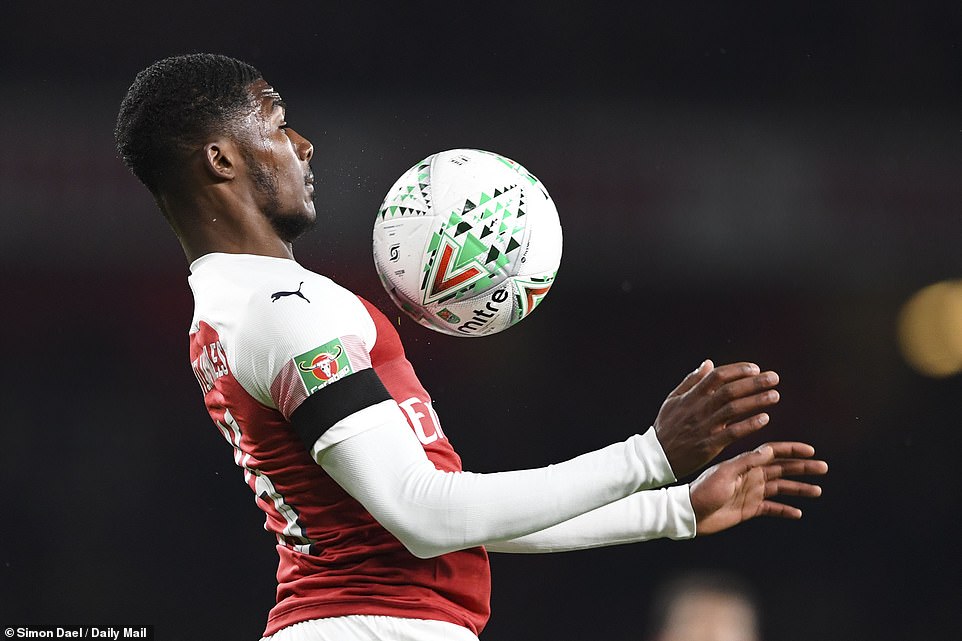 Ainsley Maitland-Niles chests the ball down during the Carabao Cup tie, his first start since fracturing his fibula in August 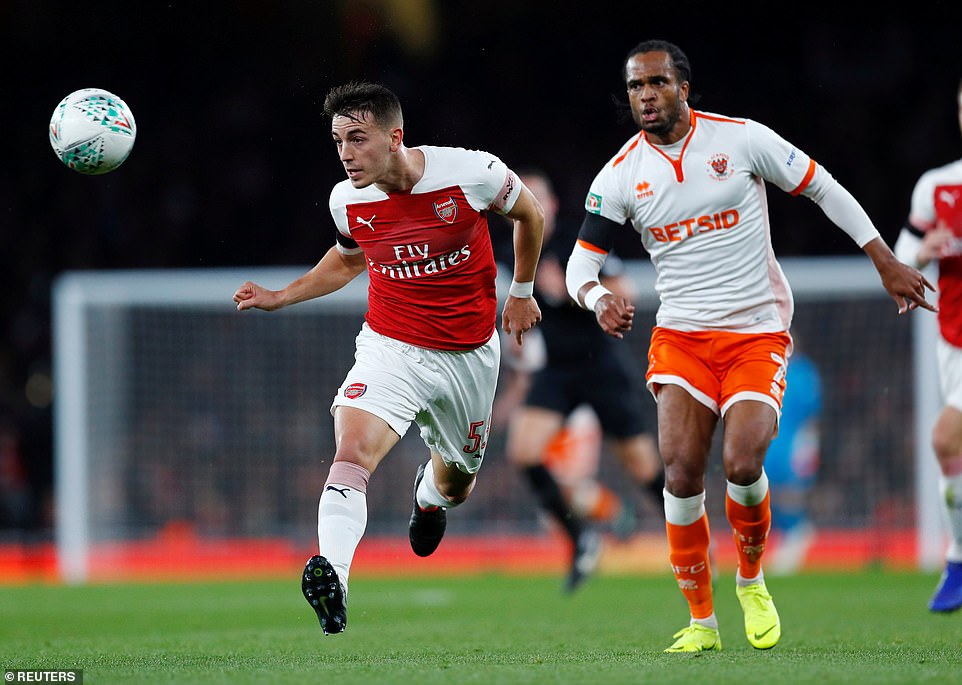 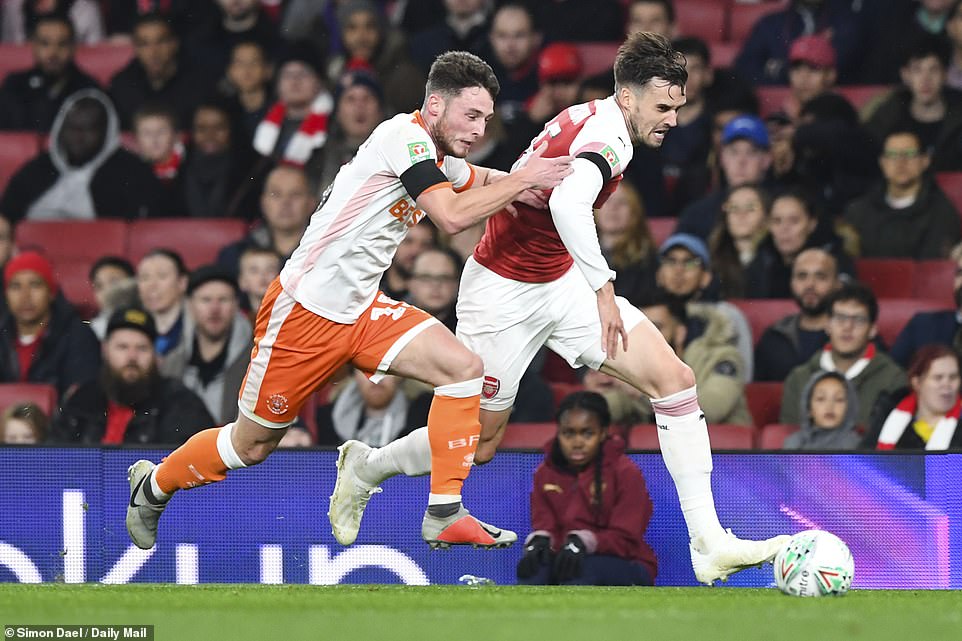 Tottenham hopeful of getting Bruno Fernandes in cut-price deal