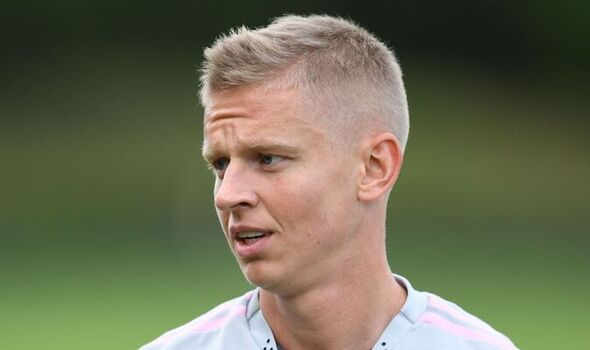 Arsenal left-back Oleksandr Zinchenko is set for a small injury lay-off after picking up a calf problem in training at London Colney. The £30million summer arrival from Premier League champions Manchester City has been a shoe-in for Mikel Arteta since landing in north London but his fine early-season form has now been disrupted just one game before the international break.

Arsenal are due to face Brentford at the Emirates on Sunday (12pm) but they will now be without their first-choice left-back with Kieran Tierney expected to keep his place in the starting XI following the 2-1 win over FC Zurich in the Europa League last week.

The Ukrainian FA have confirmed that Zinchenko has informed them that he will no longer before joining up with the national team squad for Nations League matches against Scotland (twice) and Armenia next week.

A statement read: “The Arsenal player suffered a calf muscle injury during training at the club, which will require about two weeks for treatment and recovery. Oleksandr immediately personally informed the head coach of the Ukrainian national team, Oleksandr Petrakov, of the unfortunate news by calling him. We wish Sashka a speedy recovery.”

‘Michael Jordan would get thrown out of our dressing room’: Why the Last Dance star’s competitive fire wouldn’t fly in modern football