Arsenal star Pierre-Emerick Aubameyang isn’t willing to be ‘lowballed’ in contract negotiations, reports say. Mikel Arteta said after the FA Cup final win over Chelsea on Saturday that he was confident the Gabon international would stay. However, it seems the player’s future is still in limbo at a time where Barcelona are showing transfer interest.

Arsenal want to keep Aubameyang, who showed his importance to the side with a stirring display in Saturday’s FA Cup final win over Chelsea.

The Blues took an early lead through Christian Pulisic and started the better of the two teams.

However, Aubameyang levelled for Arsenal from the penalty spot after going down inside the box.

And he then won them the trophy with another strike in the closing stages, cooly chipping Willy Caballero from 12 yards.

After the game, Arteta insisted he was confident his talisman would stay put. He said: “He knows what I think about him.

“I want to build the squad around him. I think he wants to stay and it is just about getting the deal done. 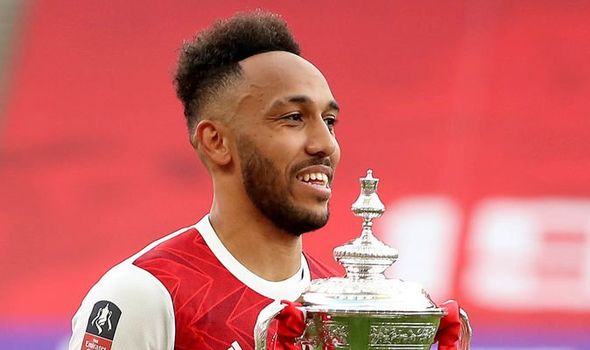 “But I think these moments will help him to realise and believe that we are in the right path and he is a big part of that. He is loved by everybody at the club. Hopefully he can continue with us.

However, the Daily Mail say that Arsenal MUST stump up £250,000-a-week in order to keep Aubameyang at the Emirates.

And the striker isn’t willing to be lowballed in negotiations, fully aware that he can earn a sizeable fee by leaving for nothing in 12 months time.

Arsenal will now have to dance to his tune and, if he doesn’t sign a new contract soon, he may even be put up for sale.

Barcelona would be frontrunners in the race to secure his signature, with the La Liga giants hoping to improve their attack after enduring a wretched campaign. 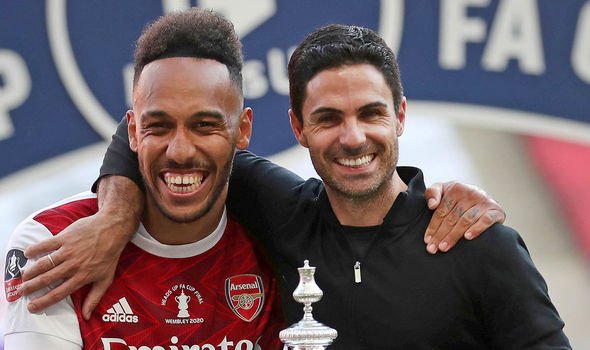 But Real Madrid have been linked as well, with Aubameyang previously promising his late grandfather that he’d play for Los Blancos one day.

After the final win over Chelsea, the 31-year-old refused to open up on his future.

“I’m really not thinking about this. I just want to enjoy with the guys and take the trophy now,” he said.

“That to me says he’s gone. I just feel like either there’s been no negotiation up until now which I don’t believe,” he told BT Sport.

“I feel there have definitely been negotiations or he’s already decided I’m going to go.

“I’m going to enjoy this moment with my team-mates and I don’t want to talk about my future.

“From my own perspective if I’m committed to the club and I know I’m staying this is a moment for me to say I’m going to sort it out it’s not done yet but I will try and get it sorted out here guys.

“That just sounds like someone who is looking to go elsewhere.

“Arsenal need to do all they can to get this guy to stay.”