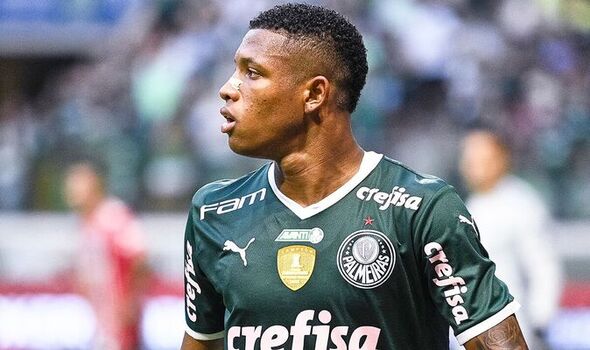 Arsenal have two secret weapons to help them beat rivals to the signature of Danilo in January. The midfielder has revealed he is friends with Gunners stars Gabriel Martinelli and Gabriel Jesus.

Danilo emerged as a target for Arsenal towards the end of the summer transfer window. However, his side Palmeiras were determined not to let him leave midway through their domestic season.

Palmeiras won the Brazilian Serie A earlier this month, with the 21-year-old key to their success. ESPN report that Monaco and Ajax are also interested in signing Danilo, giving Arsenal competition.

The player would be available for as little as £20.7million (€24m). Ajax and Monaco may be able to give the player more of a regular starting spot straight away.

However, in Martinelli and Jesus, Arsenal have two allies who can help them complete a deal. Danilo is yet to make his senior Brazil debut.

But he was called up to the squad earlier this year by coach Tite. And he revealed he became close with three team-mates, two of which play for Arsenal.

“The call-up didn’t hurt at all,” Danilo told UOL Sport. “Being there with the best in the world, players I’m a fan of, only helped me.

“It was very good. I made friends and learned a lot. I got closer to Martinelli, Gabriel Jesus and Dani Alves.”

Jesus was at Manchester City at the time but has since joined Arsenal and made a huge impact on Mikel Arteta’s squad. He and Martinelli have been influential in the Gunners’ rise to the top of the Premier League table.

Danilo was not named in Brazil’s squad for the World Cup, but the Arsenal duo were. Palmeiras are not set to be in action again until January, so Danilo may have played his final game for the club.

He has admitted he is ready for a move elsewhere. “I see myself mature enough to be able to play in any competition in the world, I’m ready,” he added.

“Palmeiras helped me a lot, from the off, with [director] Joao Paulo [Sampaio]. And I kept my mentality strong with the arrival of Abel [Ferreira].

“I prefer not to get involved with these transfer issues. I told my agent to only talk to me if it’s the right thing. Then we sit down and talk to Palmeiras and decide what’s best for everyone.”