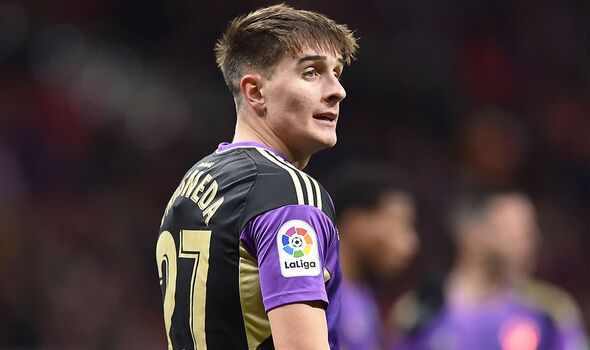 Arsenal have reached an agreement with Real Valladolid over a deal for right-back Ivan Fresneda, according to reports. Borussia Dortmund have also come to terms over a deal, with the player set to make a decision on his next club today (Monday).

Fresneda only made his senior debut for Valladolid last January. But he has already caught the eye of some of Europe’s top clubs.

Arsenal have been linked with the teenager for several weeks, as have Newcastle. His representatives have reportedly been in London on more than one occasion this month to discuss a potential move to the Premier League.

And it appears where he moves to has been narrowed down to two clubs. The Athletic reports that Arsenal and Dortmund have both agreed the same deal for Fresneda.

Win a pair of tickets to the Premier League or Women’s Super League match of your choosing! CLICK HERE

A fee of around £13.1million is claimed to have been finalised with Valladolid, as well as the 18-year-old heading back to the Spanish club on loan for the remainder of the season. Fresneda is set to make his decision imminently on which club to join after Newcastle pulled out of the race.

Fresneda’s first appearance for Valladolid came at the age of 17 in the Copa del Rey defeat to Real Betis in January 2022. He made just one further appearance that season, the 1-0 league win over Burgos three days later.

But he has become more of a regular this term. He came into the side in September and has been a regular at the back ever since.

However, with just 14 senior appearances to his name and 10 in La Liga, spending the rest of this season on loan in Spain could be beneficial for his development. Fresneda would unlikely gain a regular spot at Arsenal straight away.

Ben White has impressed at right-back this season, while Takehiro Tomiyasu is another senior option in that position. If he chooses Arsenal, Fresneda would become the club’s third signing of the window.

The Gunners completed a deal for Leandro Trossard on Friday, committing to pay Brighton up to £27million for the winger. The arrival of Poland defender Jakub Kiwior is also set to be confirmed soon.

Kiwior was at Arsenal’s 3-2 win over Manchester United at the Emirates on Sunday. He will join from Serie A club Spezia for a fee of around £17.5m.

Arsenal extended their lead at the top of the Premier League table to five points with the win. But Kiwior could make his debut in a different competition, with the FA Cup fourth-round tie at Manchester City looming on Friday.