Arsenal should not offer Pierre-Emerick Aubameyang an improved contract following the club’s decision to make 55 jobs redundant, according to former Tottenham midfielder Jamie O’Hara. Arsenal announced on Wednesday they were set to make the redundancies due to the financial impact of the coronavirus pandemic. But O’Hara does not think it would be right to then offer Aubameyang a huge wage increase.

Aubameyang is out of contract in 2021 and reports claim he is close to committing his future to the Gunners by signing an improved £250,000-a-week deal.

But O’Hara says Arsenal should instead offer the striker the same money he is on now due to the club’s financial situation.

“If you have to lay people off, that’s fine, because businesses are struggling and that’s not an easy decision to make,” O’Hara said on talkSPORT.

“But then reflect it in the fact that you don’t then offer Aubameyang another £100,000 on top of what he’s already getting paid.

JUST IN: Mourinho warned Pierre-Emile Hojbjerg will get Tottenham ‘nowhere near’ top four 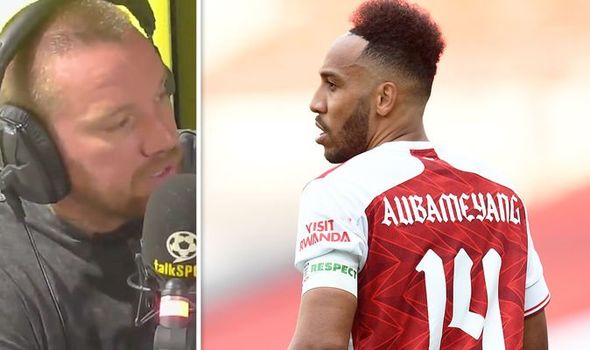 “The people they’re letting go work at the stadium and in hospitality – they’re the foundations of a football club.

“The secretaries, the tea ladies, the chefs, people who have been there for 20 or 30 years. Players come and go.

“My issue is that players come and go and they’re still in this bubble of ‘we demand £350,000-a-week’ even though there’s been a global pandemic and loads of people are losing their jobs.

“Don’t increase wages when people are losing their jobs at your club – offer him the same deal.

“Arsenal should explain to Aubameyang: ‘You’re a massive foundation of the club, you’re a massive asset to us, but this is what’s happening and you need to understand that. We love you, the fans love you, we want you to say, but it’s wrong for us to offer you more money when we’re laying off 55 people’.”

O’Hara is disappointed large transfer fees and wages are still being paid following the coronavirus pandemic.

“The problem I’ve got is footballers are still in their own little bubble,” O’Hara added.

“Everyone else in the world is getting affected by it, everyone else is struggling and everyone is having to think about ‘how do we keep our business afloat’ and ‘where’s the money coming in’ and ‘what job am I going to take If I’m made redundant’.

“Footballers are still demanding “350,000-a-week – nothing has changed.

Christian Eriksen: Tottenham’s Jose Mourinho says he needs to know what is in midfielder’s heart