Arsenal should not give Willian a three-year contract, according to former England right-back Danny Mills. Chelsea star Willian is set to leave the Blues when his contract expires this month. Chelsea are not prepared to give a three-year deal to a player who turns 32 on Sunday.

But reports claim Arsenal are willing to give Willian what he wants and a deal is close to completion.

Mills says Willian has proven his undoubted talent since he joined Chelsea in 2013.

However, he does not think a three-year contract would be a wise investment from Arsenal.

JUST IN: Barcelona announce done deal for winger who has £270m release clause 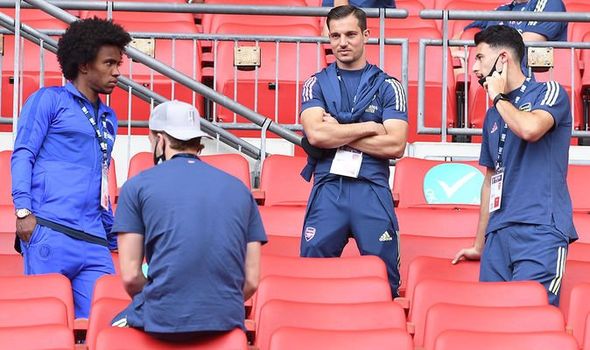 “You have to remember, Chelsea nicked him from Tottenham at the 11th hour didn’t they.

“Everybody thought the deal was done, Daniel Levy sort of didn’t quite get it over the line and then Chelsea came in and took Willian.

Meanwhile, former Gunners winger Perry Groves is a big fan of Willian and says he would be an upgrade on the players Arsenal currently have in that position.

“It’s a no-brainer, an absolute no-brainer,” Groves said on talkSPORT.

“Now because they look after themselves, he’ll be playing until he’s 33 or 34.

“And if you look at his injury record, over the last seven years he’s averaged 33 or 34 games a season, so he’s not injury prone, he’s consistent, he’s got a winning mentality, he will buy into the way that Arteta wants to play, his attitude is good, he plays in the Premier League, so the risk is low and reward is very, very low.

“Is he better than what Arsenal have got at the moment [in that position?] I’d say yes. He’s experienced.

“Yes [Pepe has got great potential] but he’s not on Willian’s level of consistently delivering, he’s had his best goalscoring year.

“Willian would make Arsenal a stronger team, it’s a no-brainer.”

Six issues to be resolved when the Premier League returns

Arsenal vs Newcastle live stream: How to watch Premier League match online and on TV tonight