Arsenal will play the second leg of their Europa League round-of-32 clash against Benfica at the Stadio Georgios Karaiskakis in Athens due to coronavirus travel restrictions.

Earlier this week, UEFA confirmed both legs of the tie were set to be played in neutral venues in order to satisfy UK coronavirus restrictions.

The UK government has imposed strict travel restrictions on arrivals from Portugal, which was drawn up on a “red list” of countries.

Arsenal will therefore travel to the Stadio Olimpico in Rome on February 18, and to the Georgios Karaiskakis stadium in Athens on February 25.

“Uefa has confirmed that our Europa League last-32 home leg against Benfica will be played at Stadio Georgios Karaiskakis in Athens,” an Arsenal statement read on Friday.

“The match – at the home of Olympiacos – has been moved from Emirates Stadium due to Covid restrictions. The match will be staged on February 25, kick-off 5.55 (GMT).

“The first leg is being played at the Stadio Olimpico in Rome on February 18, kick off 8pm (GMT).” It is the latest European tie to see a venue change in the last week after various British sides were forced a change of travel plans due to the English variant of Covid-19.

The first legs of Liverpool and Manchester City’s Champions League ties against RB Leipzig and Borussia Monchengladbach have been moved to Budapest, and Manchester United’s Europa League round-of-32 first-leg clash against Real Sociedad will now take place at the Juventus Stadium in Turin.

UEFA has also confirmed the usual away goal rule will remain in place even if sides will not be able to host their home ties in their respective home grounds.

Arsenal topped Group B in the Europa League after winning all six of their games to progress to the knockouts, while Benfica finished second to Rangers in Group D.

‘We are all exposed’ – Arteta reveals online threats to family

Arsenal manager Mikel Arteta has revealed his family have been threatened on social media, saying more needs to be done to protect footballers, managers and officials who are “exposed” to hate.

Arteta says everyone in football is “exposed” and while he can brush off abuse directed at him personally, he is affected more when abusers target his family. 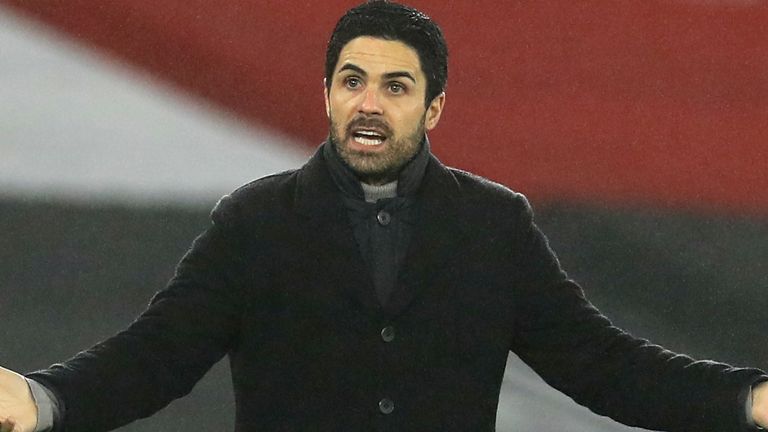 “It would affect me a lot more the moment someone wants to touch my family, because it happened. The club was aware of it and tried to do something about it,” Arteta said.

“It’s not going to stop tomorrow, we know that, we want to do something medium or long term. It’s part of the job, I am not the only one suffering this type of thing.

“When you are winning it is beautiful, you are incredible and you are the best coach. When you lose it is the opposite, it’s not pleasant. When it is personal against me I can take it, but when it is my family involved it is a different story.

“The club is very supportive, we do what we have to when those things happen. Medium, long term, can we do something about it? We need to protect people in the game.”