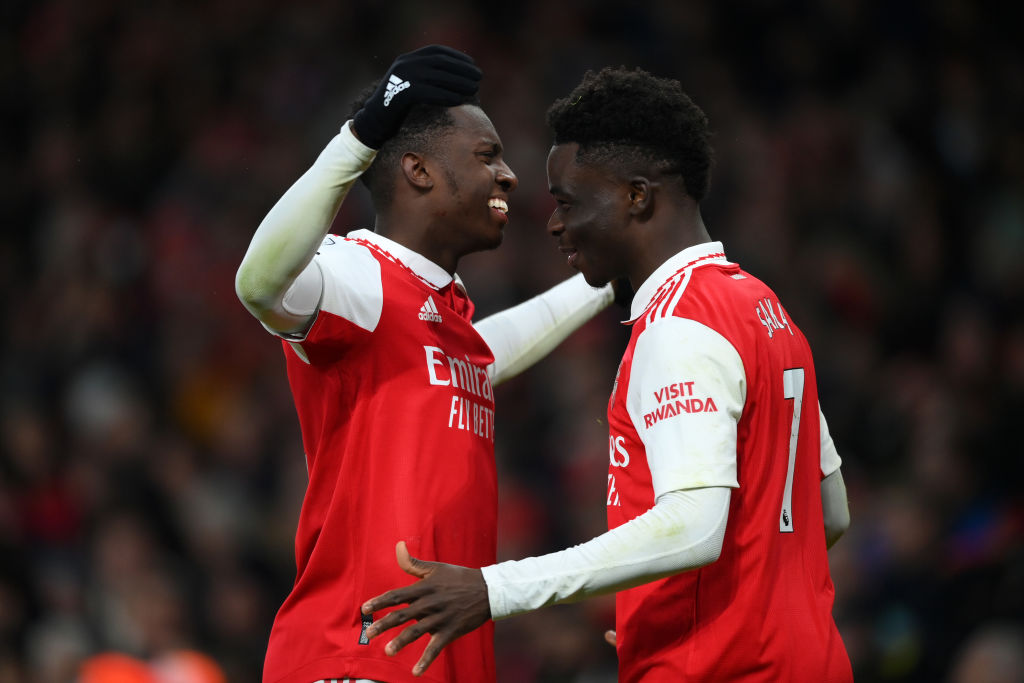 Arsenal restored their five-point advantage at the top of the Premier League table after a thrilling 3-2 victory over Manchester United at the Emirates Stadium on Sunday.

Mikel Arteta’s side made a typically electric start to the match but it was United who took an early lead through Marcus Rashford with the visitors’ very first shot, though they were pegged back just seven minutes later thanks to Eddie Nketiah.

It was the Gunners who had the game by the scruff of the neck and another fast start at the beginning of the second half saw Bukayo Saka match his England team-mate’s earlier effort with a left-foot sizzler of his own.

United did not wilt after going behind and found an equaliser through Lisandro Martinez, though it was one way traffic after that as Erik ten Hag’s side were forced to survive an onslaught from the Gunners, who laid siege to their opponents’ goal before Nketiah finally grabbed a deserved 90th-minute winner.

Despite Arsenal dominating the early exchanges, a brilliant transition from United saw them take the lead as Rashford nutmegged Thomas Partey on the edge of the box and then rifled a ferocious shot towards goal that swerved in at the near post.

The Gunners roared back quickly, though, benefiting from some dithering at the back from United which resulted in a corner; Arsenal played it short and a brilliant cross from Granit Xhaka on the overlap found Nketiah at the back post to nod home.

Ben White endured a difficult half up against Rashford and, having picked up a yellow card, was withdrawn at the break and replaced by Takehiro Tomiyasu. The pattern of the match was unchanged, though, with United countering and Arsenal applying huge amounts of pressure.

Arsenal took the lead for the first time in the 53rd minute and again it was somewhat self-inflicted from United’s perspective, with Christian Eriksen caught in possession on the edge of his own box.

That should take nothing away from the quality of the goal, however, with Saka standing up Eriksen before darting infield and firing a stunning, curling effort into the far corner to give David de Gea no chance.

United had been passive and reactionary both when ahead and when the scores were tied, but they reacted immediately to the disappointment of going behind and Rashford very nearly grabbed a second goal after bundling his way into the box, with a deflected effort producing a world-class save from Aaron Ramsdale.

But the Arsenal shot-stopper went from hero to zero just minutes later, allowing a corner into the box to squirm through his grip where Martinez was on hand to bravely loop an inventive header into the back of the net despite Gabriel Magalhaes’ despairing attempt to clear the ball on the line.

Arsenal kept pushing forward in search of a winner and went agonisingly close twice; first Martin Odegaard put a great opportunity over the bar and then Saka kissed the outside of the post with an effort not dissimilar to his goal.

As the seconds ticked away, United sat back deeper and deeper and had to survive several penalty box scrambles, one of which saw De Gea get down brilliantly to deny Nketiah what looked like a certain winner.

Then came what could prove to be a pivotal moment in the title race as January recruit and second-half substitute Leandro Trossard strode forward and played in the overlapping Oleksandr Zinchenko, whose pullback was fired towards goal and tapped in from close range by Nketiah to prompt wild scenes of celebration at the Emirates.

Earlier in the day, Manchester City swept aside Wolves 3-0 thanks to an Erling Haaland hat-trick to briefly close the gap at the top of the table to just two points, though Arsenal restored their five-point advantage and still have a game in hand over their title rivals.

Arsenal to film Amazon 'All or Nothing' documentary next season