Report and highlights from the Sky Bet Championship clash between Blackburn Rovers and Stoke City at Ewood Park as Nick Powell puts the Potters in front, but John Buckley levels for the home side before James Chester sees red late on

If ever there was a game to neatly sum up the unpredictable nature of the Championship, this was it. Stoke dominated much of the game after Nick Powell’s bullet header put them in front seven minutes before the break.

They hit the woodwork and created countless chances while hardly giving Rovers a sniff. But the game swung within four second-half minutes as Buckley levelled in the 76th minute with Blackburn’s second shot on target, and James Chester saw red for bringing down Adam Armstrong. 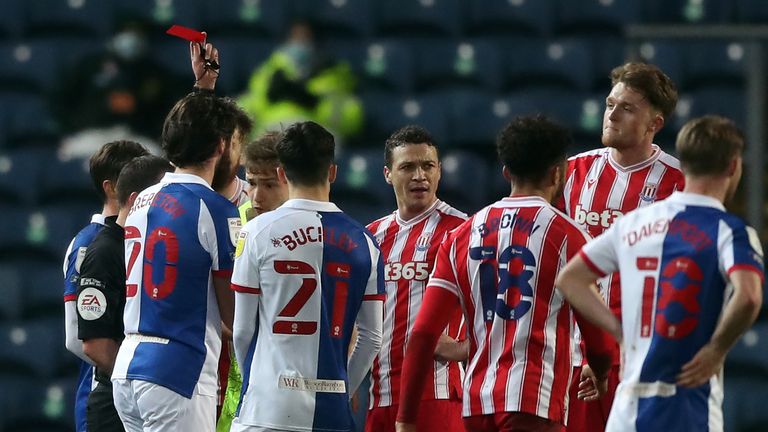 But a defence that has conceded once in seven away games had the nous to hold on for a point when three looked far more likely.

Both sides lost ground on the top six, as Blackburn have now won one in five, while the Potters are winless in four.

Rovers made seven changes from the FA Cup defeat to Doncaster and handed a debut to on-loan defender Jarrad Branthwaite. The Potters gave new signings Rabbi Matondo and Rhys Norrington-Davies their first starts.

Rovers struggled to break down Stoke’s miserly defence and the visitors took control from the moment they registered their first shot in the 38th minute, when Jordan Thompson’s pinpoint corner was met six yards out by Powell who powered his header past Thomas Kaminski.

Thompson went agonisingly close to doubling the advantage moments later when neat interplay manufactured a position on the inside left and his left-foot shot rattled the far post with Kaminski beaten.

The Blackburn goalkeeper then produced a fingertip save to deny Powell from another Thompson corner, as Stoke threatened to run away with the game before half-time.

Stoke’s dominance continued in the second half as Jacob Brown’s low cross was parried into the six-yard box by Kaminski before Rovers scrambled clear, and the potent combination of Thompson and Powell combined yet again but the latter headed over from 12 yards.

Despite the pattern of the game, the lead remained slender and Josef Bursik produced a fine reflex save to tip behind Armstrong’s vicious first-time shot in the 73rd minute.

And out of nowhere, Rovers were level in the 76th minute when a deep cross was kept in play on the left by Elliott and his centre was tapped in from close range by Buckley.

This remarkable game swung further towards the hosts two minutes later when Stoke’s captain Chester was shown a straight red card for bringing down Armstrong when he was set to race clear of the Potters’ defence.

Rovers sensed an opportunity but Ben Brereton’s late low shot was saved by Bursik and Stoke ensured they left with a point.

Manchester United to install 1,500 barrier seats at Old Trafford in 2021