‘That should be the END of Graham Potter at Chelsea’: Blues fans tear into their under-fire boss after ‘DISGUSTING’ loss at Newcastle and claim his ‘stock has dropped already’… with some calling for him to be sacked just two months into his reign

Chelsea fans have taken to social media to call for their new head coach Graham Potter to be sacked – just two months into his time in charge.

The Blues are without a win in five games and it appears that fans are starting to become impatient following the latest defeat.

Newcastle were allowed to ease their way to a 1-0 win against the London side in a performance which Chelsea fans referred to as ‘disgusting’. 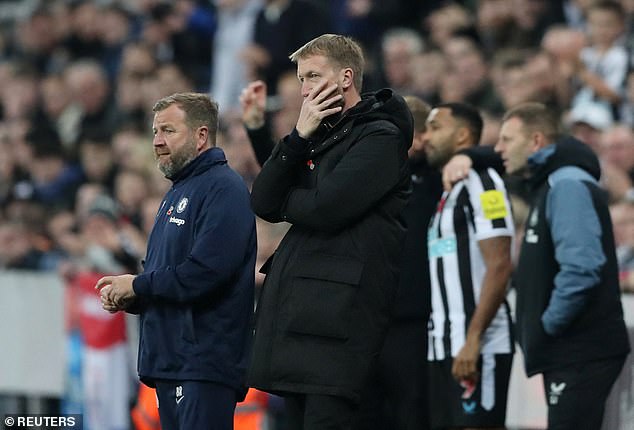 Some Chelsea fans referred to the performance against Newcastle as ’embarrassing’ and that Potter has been a ‘disgrace’ during his time at Chelsea.

Another added: ‘Potter is embarrassing. Simple as that. How can’t people see that’?

It is clear that many Chelsea fans are also still longing for their old boss Thomas Tuchel – which could explain why they have been so quick to turn on Potter.

Potter has struggled to fill the void left by the German head coach and many have questioned his ability to step up to a big club with one person saying, Potter only moved to Chelsea to ‘chase glory’.

One Blue said: ‘Clear absence of mentality. To play like that against that type of opposition is a disgrace. Potter needs to snap out of the small club mentality.’

When Potter arrived from Brighton, fans were optimistic that he could implement is free-flowing football from his time at Brighton with Chelsea.

However, it is yet to be seen so far with one fan saying; ‘Potter needs to go. No pattern and ideas. Even average players can still play good football.’

The World Cup seems to have come at a good time for Potter as he is now able to take a break and look to re-energise his side following the completion of the tournament.

But for some Chelsea fans, they believe the 47-year-old should be gone by then or the club could find themselves in a relegation battle.

One fan said: ‘That should be the end of Potter at Chelsea. We’re  going to be fighting for relegation if the owners don’t act now.’ 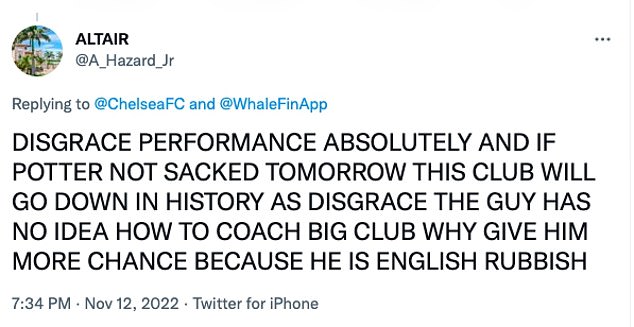 Chris Wilder could QUIT Sheffield United over differences with owner