Manchester United are yet to make an official bid for top transfer target Jadon Sancho which has left Borussia Dortmund “in a hurry” to get a deal done, according to Sky Sports reporter Kaveh Solhekol. Dortmund want a move to be completed soon to give them enough time to buy replacements for Sancho. The 20-year-old has been linked with a move to United for a number of months but the Red Devils are unwilling to pay the €120million fee Dortmund are demanding.

But United’s lack of movement saw Sancho board the flight to Switzerland.

And Dortmund have been left confused by United’s actions and are not aware how much the Old Trafford club are willing to pay for the England international.

“As of yet there has been no bid from Manchester United,” Solhekol said on Sky Sports News. 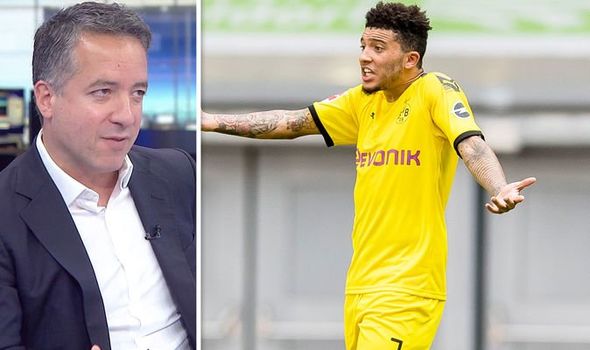 “We know where [Dortmund] stand, they’ve said they’re not going to let him go for less than €120m and they’re a bit bemused by the fact that they still haven’t had a bid from Manchester United.

“Obviously last week we brought those reports that United wouldn’t pay over the odds for Sancho but as far as Dortmund are concerned, they say: ‘Okay, Manchester United have said they’re not going to pay €120m, but they haven’t told us what they are willing to pay, we haven’t heard anything from them’.

“If Sancho’s going to leave they want to sign replacements, so they’re in a hurry to get it done.

“But United are pretty relaxed about the situation it seems and they haven’t made their move.”

Meanwhile, former Chelsea defender Jason Cundy believes United must get a deal for Sancho completed as soon as possible or risk missing out on him forever.

“Jadon Sancho, how often is he going to come up for sale? If he goes to Real Madrid, probably never again,” Cundy said on talkSPORT.

“So if he turns out to be the real deal, this is now probably the only time that Man United might be able to sign him.

“When you’re the biggest club in the world, unfortunately they can’t plead poverty.”

Wins and byes have Victory on the rise: Nabbout