Bournemouth 0-1 Manchester City: Riyad Mahrez comes off the bench to score winner as Pep Guardiola’s side heap pressure back on Liverpool in the title race ahead of Merseyside derby

For Manchester City, the stress signals came. One by one, the wounded trudged off the field and down the tunnel.

Shortly before the interval, Kevin De Bruyne felt a tweak in his hamstring, stumbled over to the touchline and after a chat with Pep Guardiola, he exited the fray. Then, immediately after the interval, John Stones followed the same pattern.

Having already lost Aymeric Laporte and Fernandinho, City’s men are falling at an alarming rate and as the coming weeks evolve, it may be that Guardiola’s men come up short across three competitions. 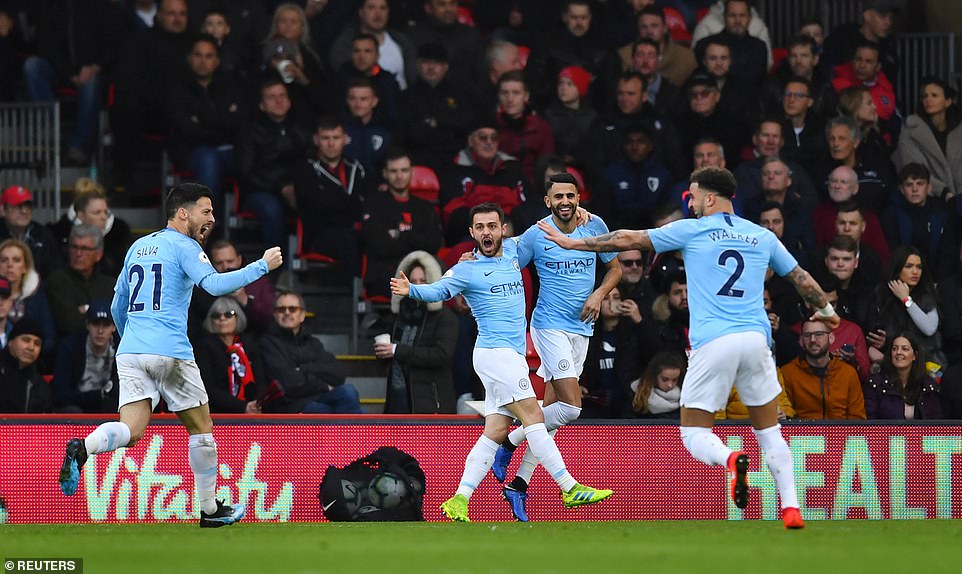 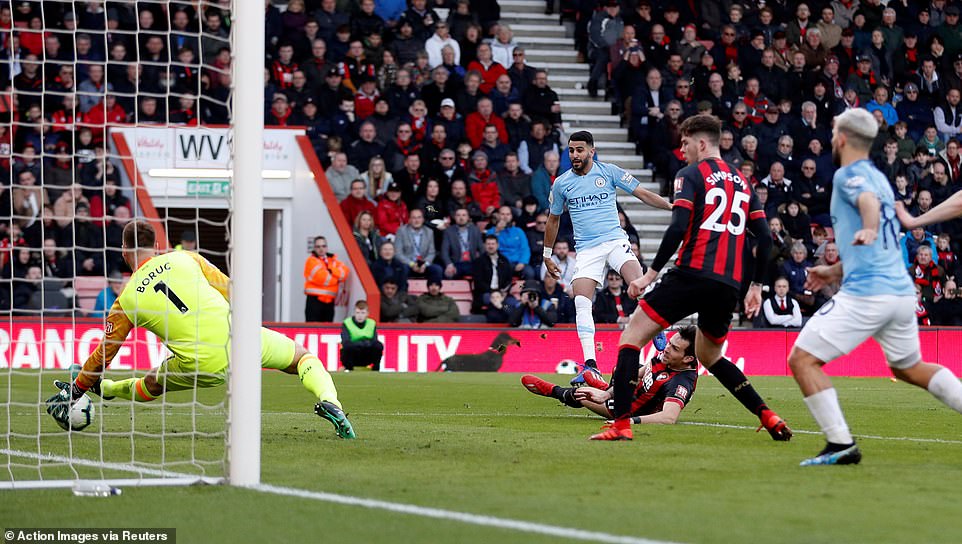 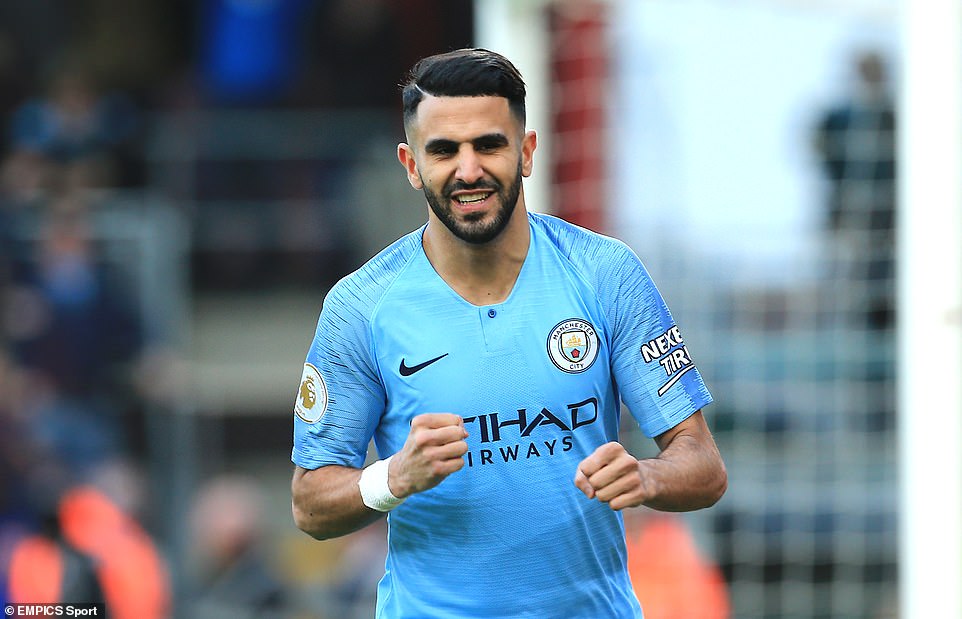 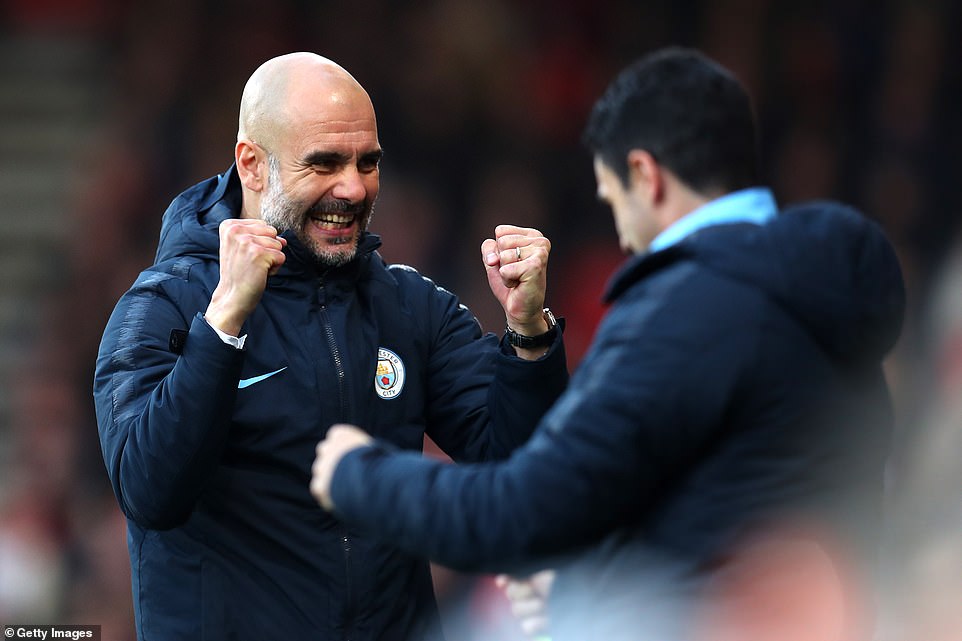 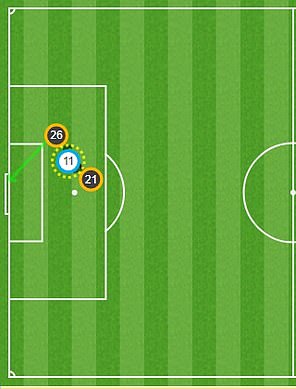 Riyad Mahrez fired a low effort in at the near post to give Manchester City the lead. Click HERE for more from our Match Zone.

Briefly, we wondered whether this may become the kind of awkward away encounter that undermine title charges. Certainly, as City sought to protect a slender advantage late on, Guardiola’s agitation increased on the touchline.

When Kyle Walker and Josh King squared up in front of the dugout, Guardiola himself stepped between the two players to ensure Walker did not end up in too much bother. When Walker then squandered possession recklessly, his manager gripped his head in his hands and squatted down on his haunches in angst-ridden frustration.

On the final whistle, there were bear hugs with his coaching staff and the kind of embraces that suggested City had overcome a significant hurdle.

While City are losing key players and some fluency, this was a day when the manager would have learned much about his players. When the going got tough, the tough got going 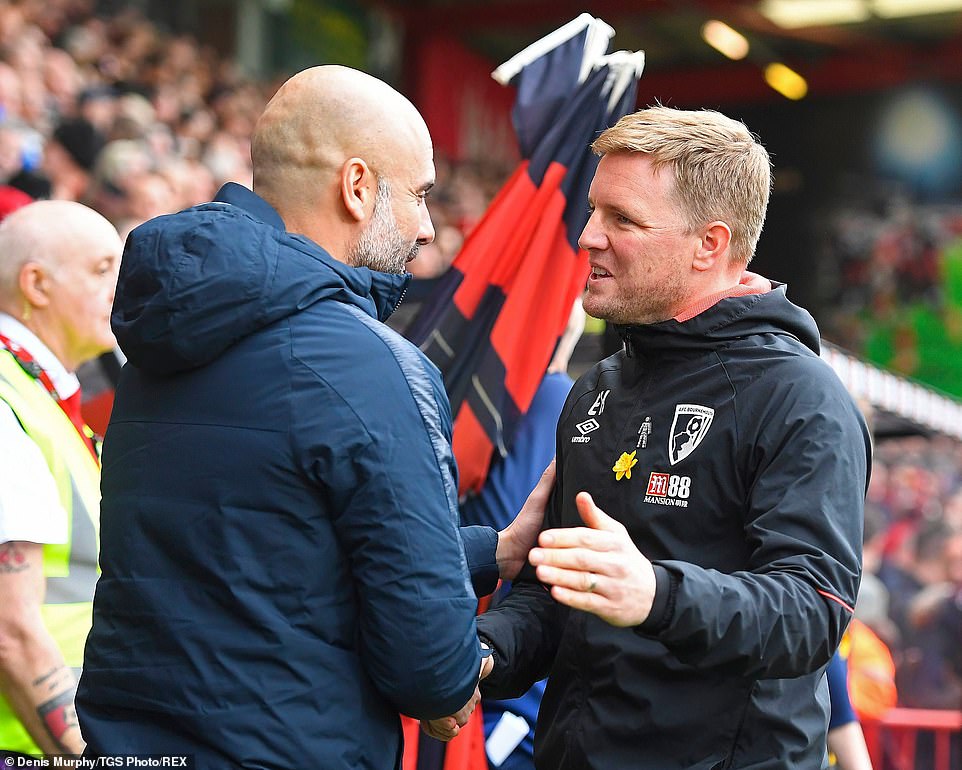 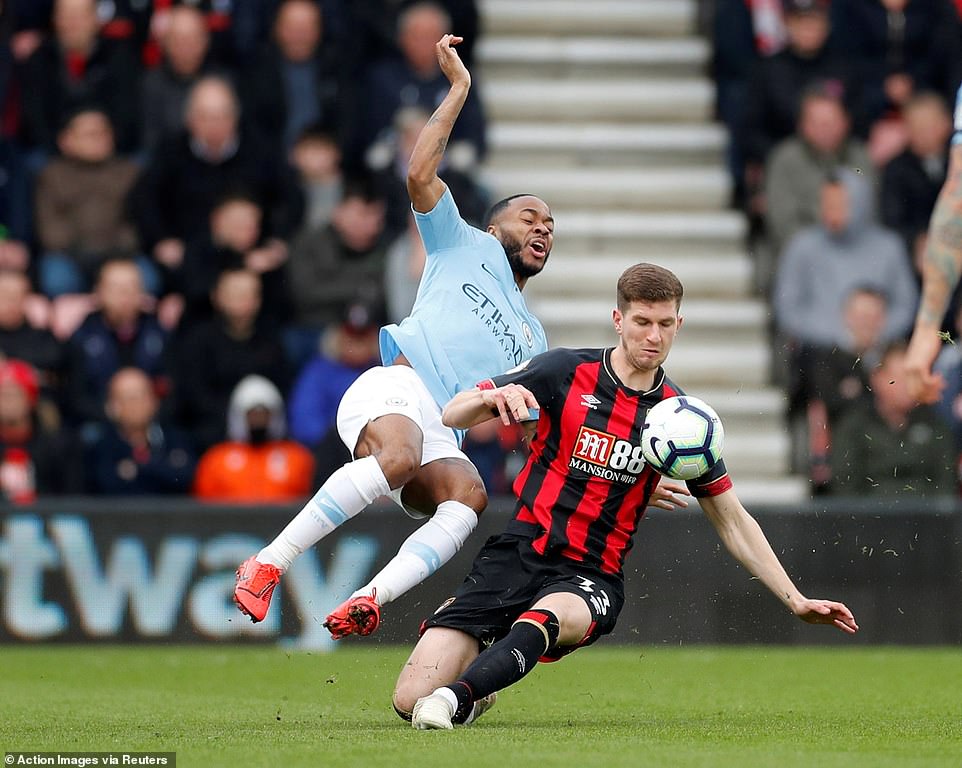 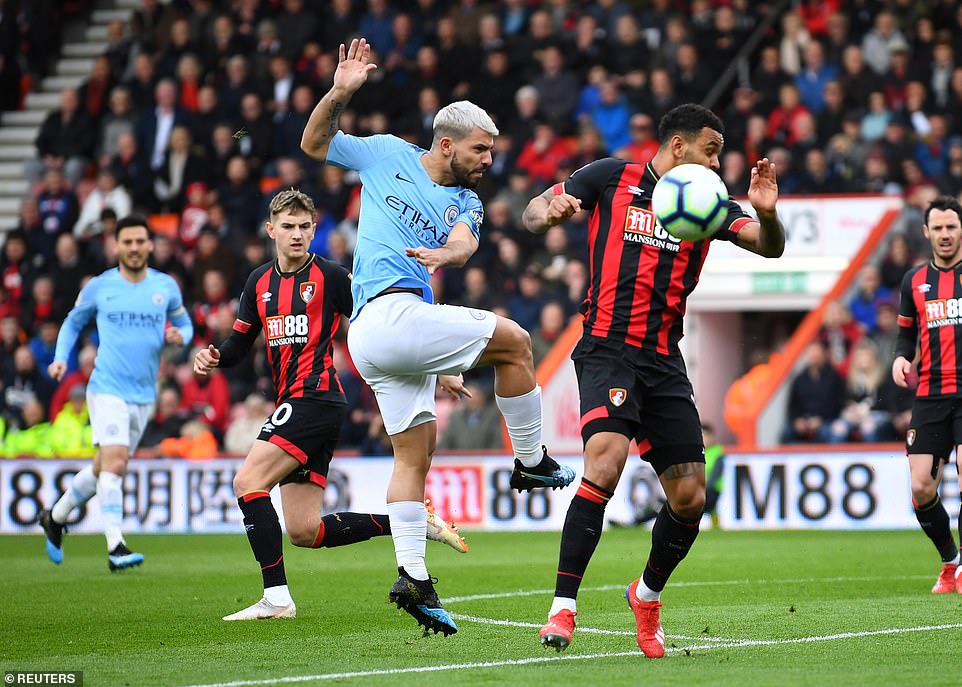 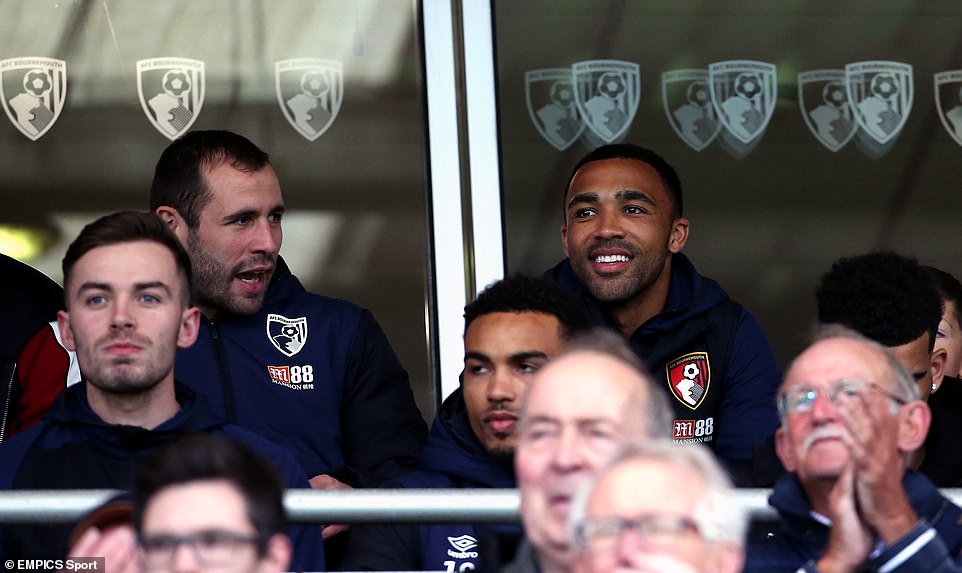 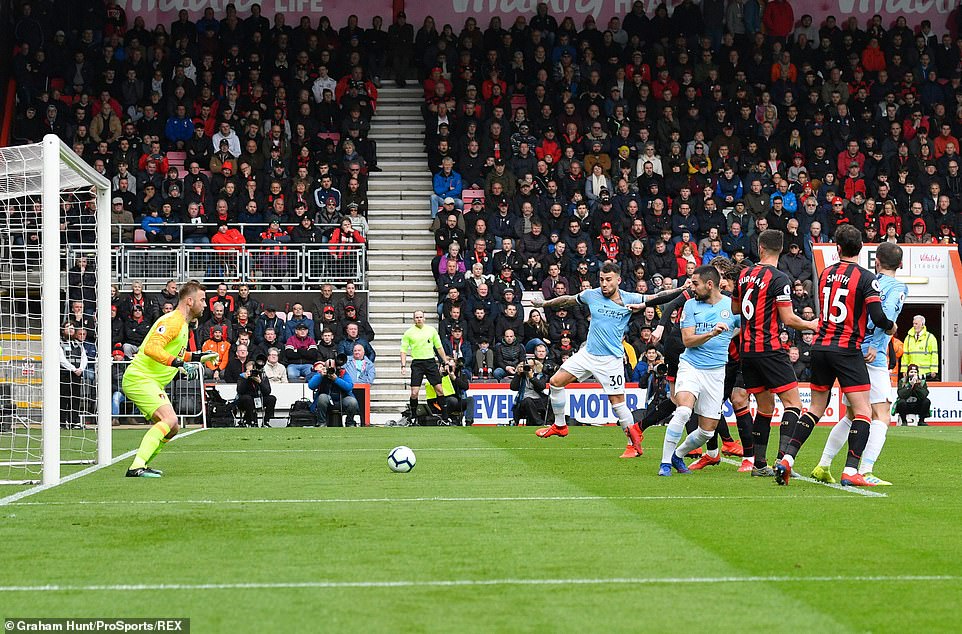 Nicolas Otamendi tries to find an opening for the away team but the ball runs away to safety, much to the relief of the hosts 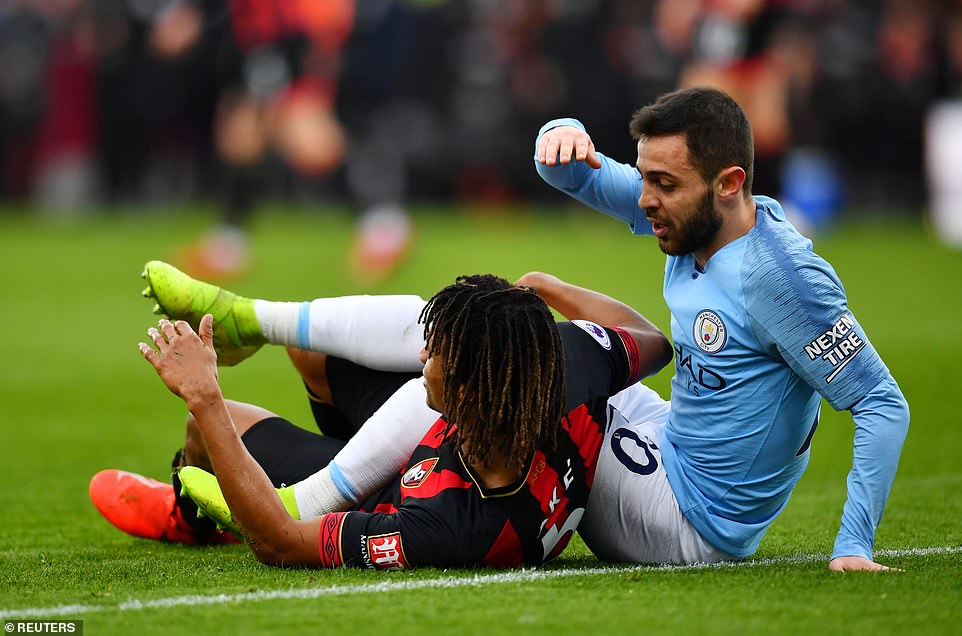 Guardiola knows that City have no room for error in their gripping pursuit of Liverpool and any dropped points at this stage would represent a drama. In truth, City had more than enough chances to have secured a more handsome victory. Still, this is a fifth victory in succession and puts pressure on Liverpool ahead of tomorrow’s visit to Merseyside rivals Everton.

The relief for City’s manager was understandable. For 55 minutes on the south coast, City’s performance was rather stodgy and the flair that epitomises Guardiola’s side appeared elusive.

There is, also, a degree of perspective required. The violins will not be playing too loudly for a team that can bring the £60m Riyad Mahrez from the substitute’s bench and it was the Algerian who crucially provided the deadlock. The goal itself was rather scruffy.

Oleksandr Zinchenko worked his inside and Bournemouth could not quite clear their lines. David Silva took the ball on inside the penalty area, nudged it to his right towards Mahrez, who had time to control before scuffing a low finish past Artur Boruc at his near post. 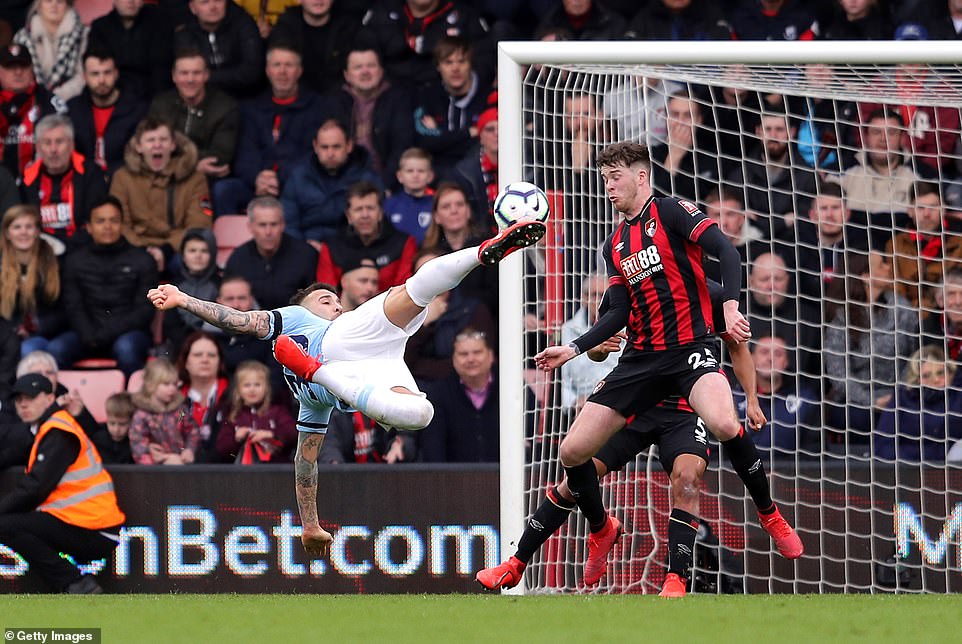 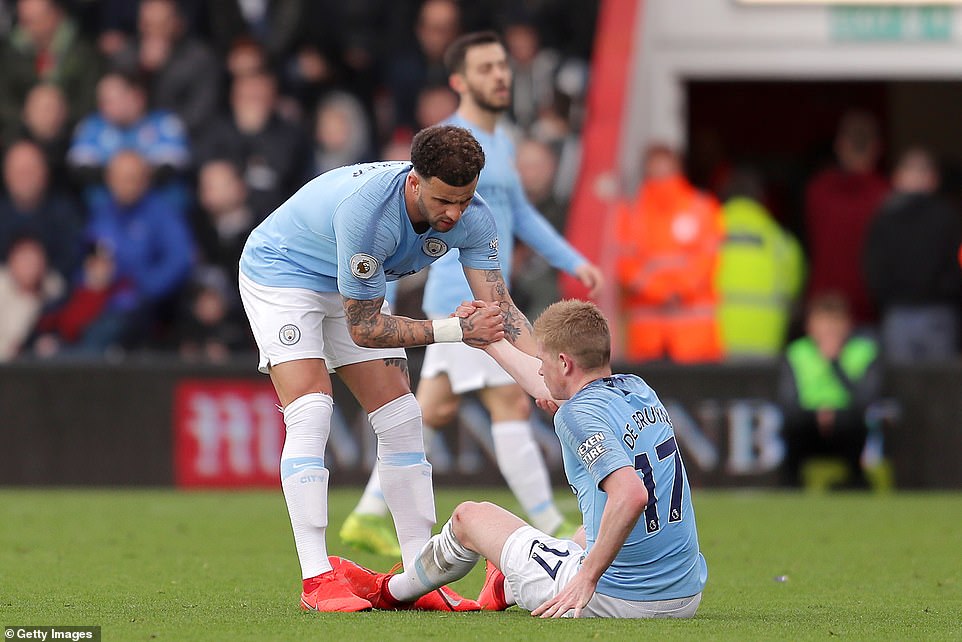 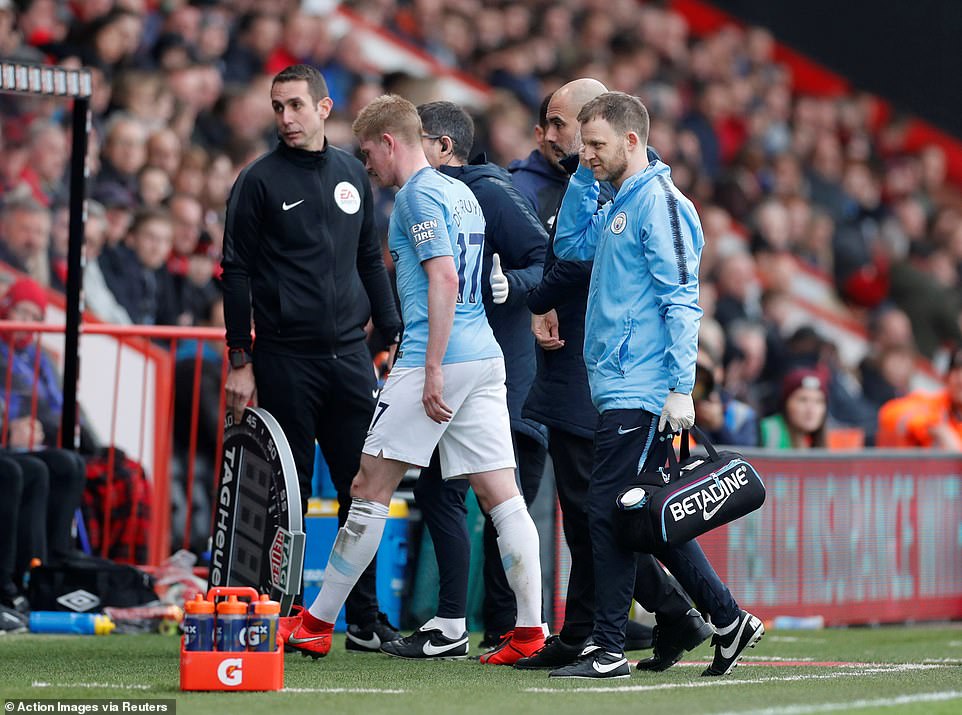 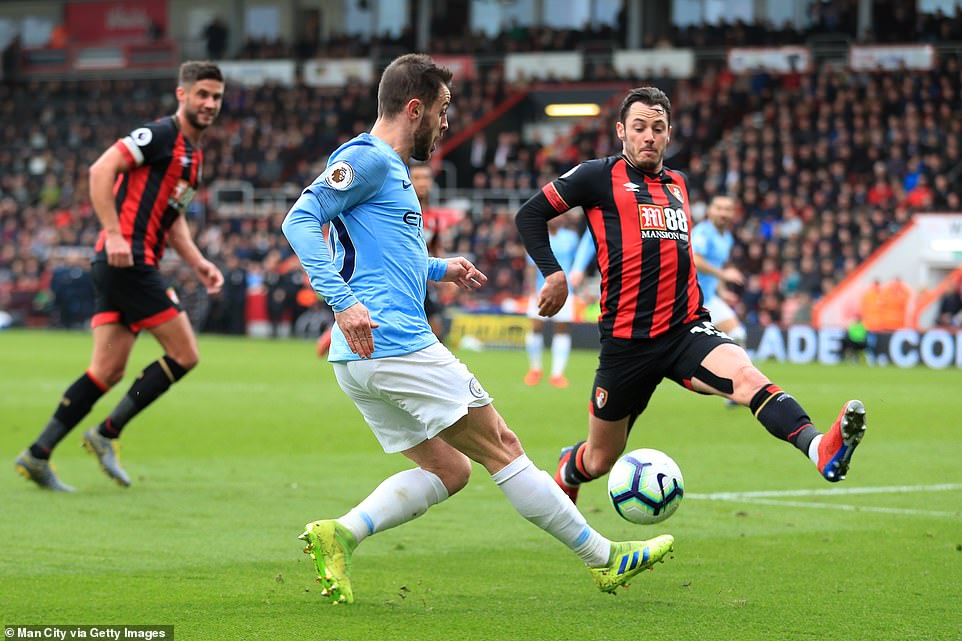 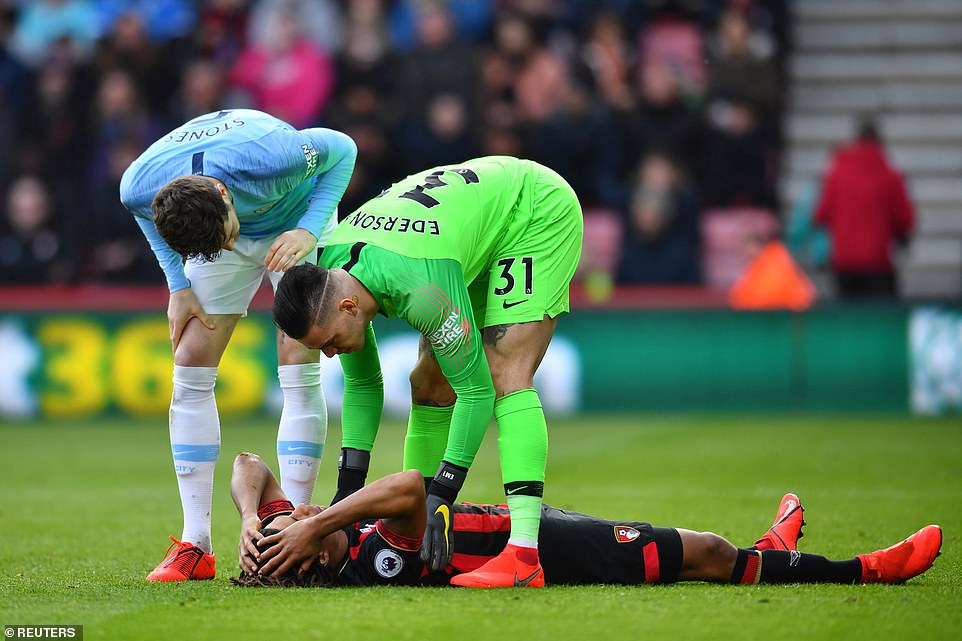 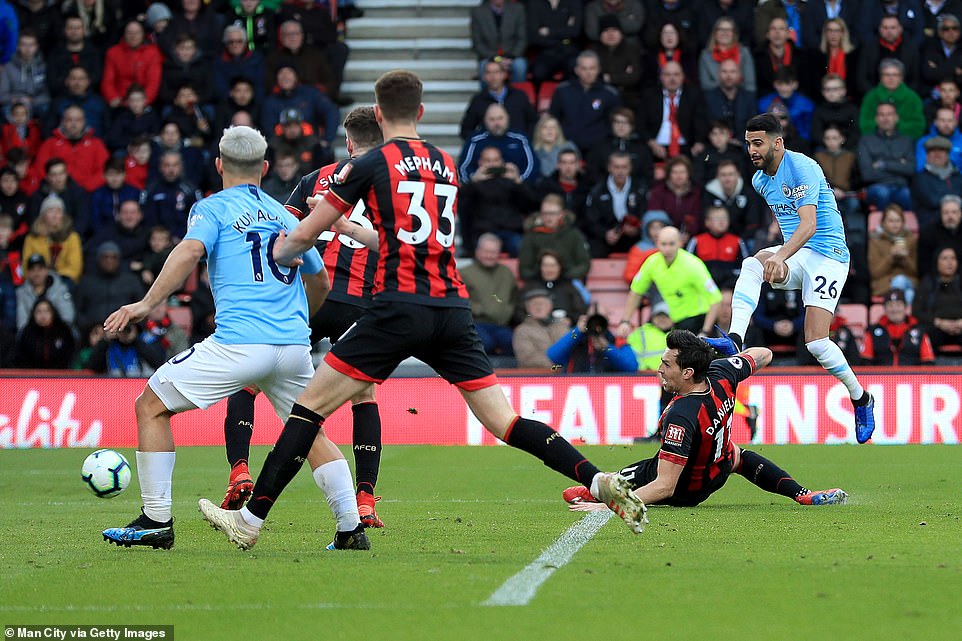 After taking the lead, City continued to create chances. Bernardo Silva produced a sublime pass to split the Bournemouth defence and Raheem Sterling was denied by a fine Boruc save. Borus then produced a more eye-catching intervention when Sterling broke through once more. The England international looked to have headed the ball past Boruc on his way to rounding the goalkeeper but a hand appeared to claw the ball away.

By the latter stages, the game enjoyed an openness that was not forthcoming in the first period. City, as ever, had been the dominant side. During the first half, City enjoyed over eighty per cent of ball possession and their hosts did not earn a corner or produce a shot on goal.

For all the oppressive numbers, though, Bournemouth actually looked quite comfortable and they earned a club record of their own by preventing City from scoring in a half of Premier League football for the first time. Yet even when City are a touch off-colour, they continue to play, continue to create opportunities. David Silva had the best of the first-half chances, side-footing wide after a De Bruyne pull-back. City also threatened from set-pieces, as Boruc clawed down to deflect away a Jack Simpson miscue.

Bournemouth are a peculiar team that started the season impressively but their campaign has been derailed by injuries and stuttering form. They have lost nine consecutive away games but they are a different beat at home, where had only been defeated by Liverpool in their last seven. 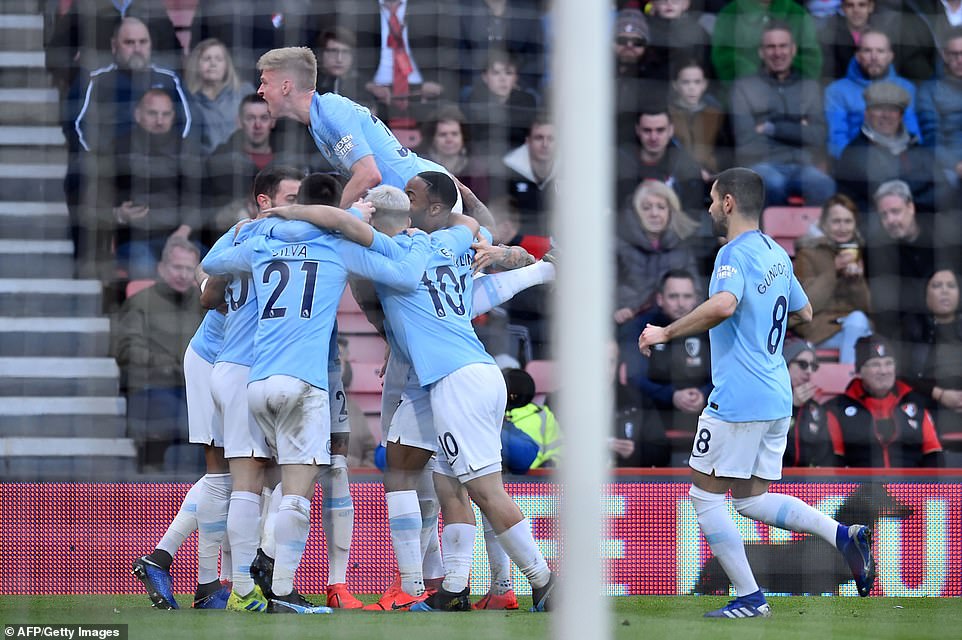 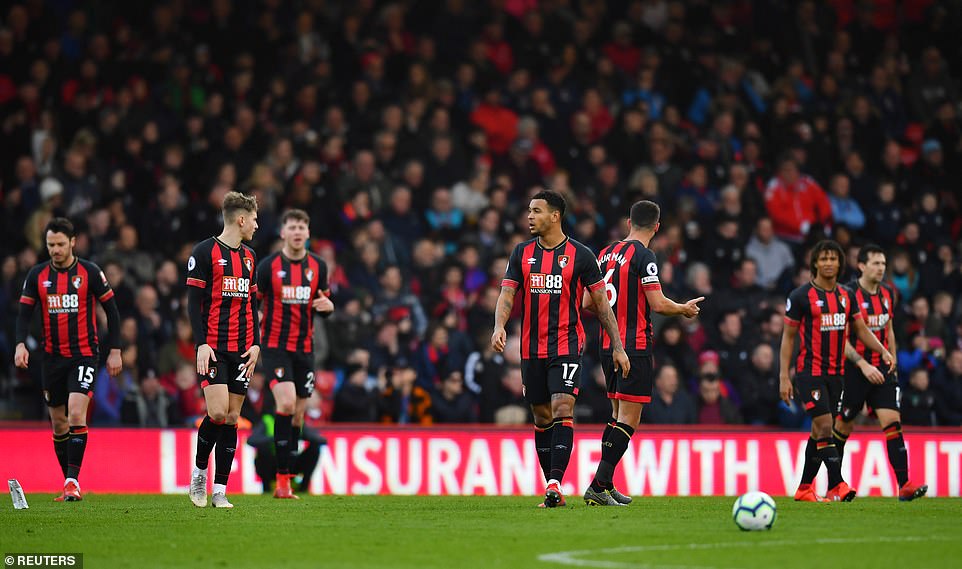 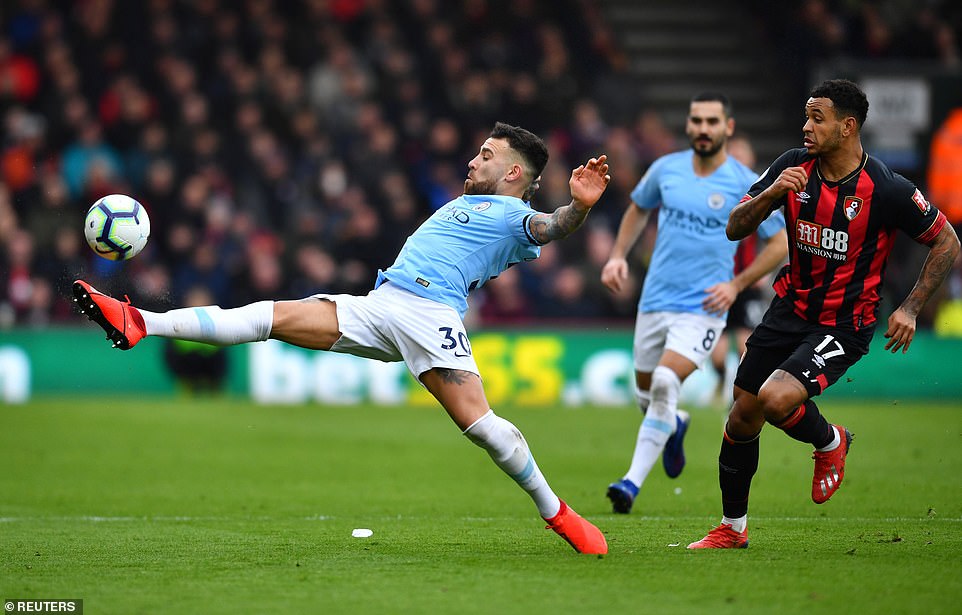 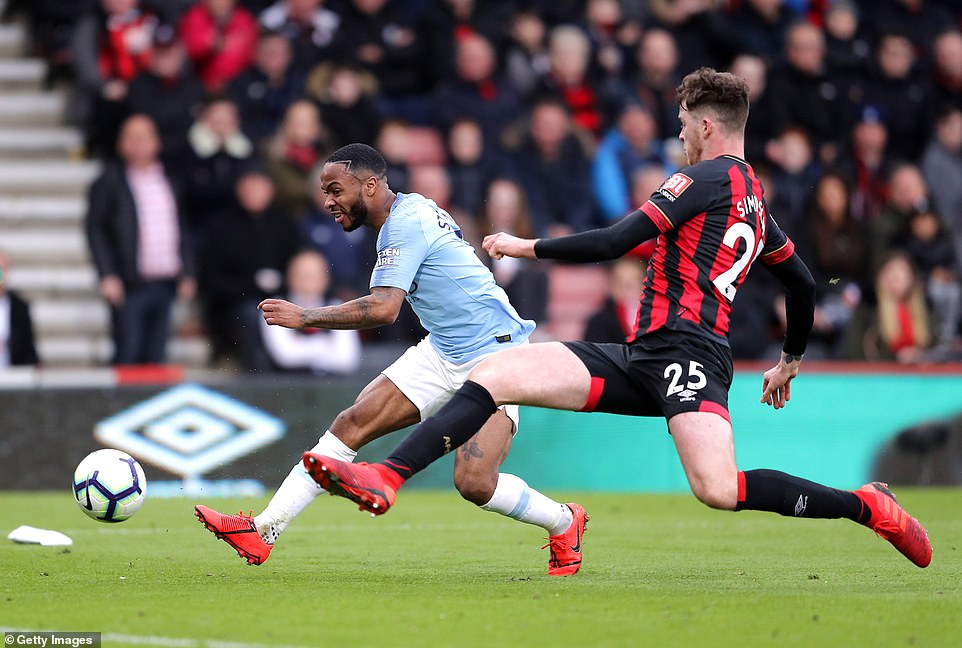 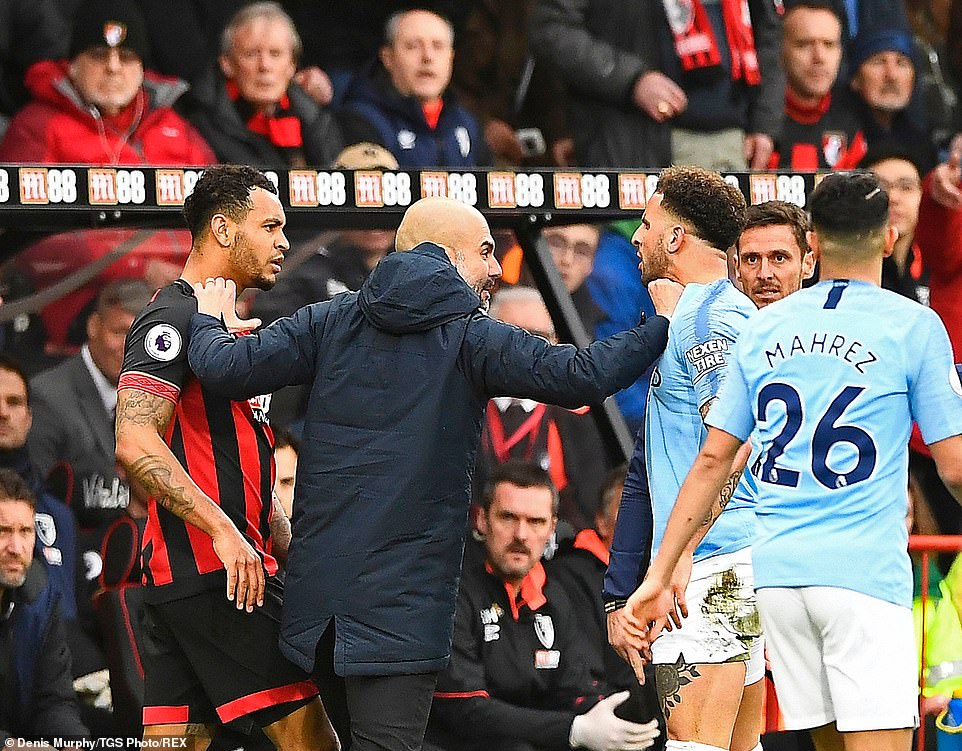 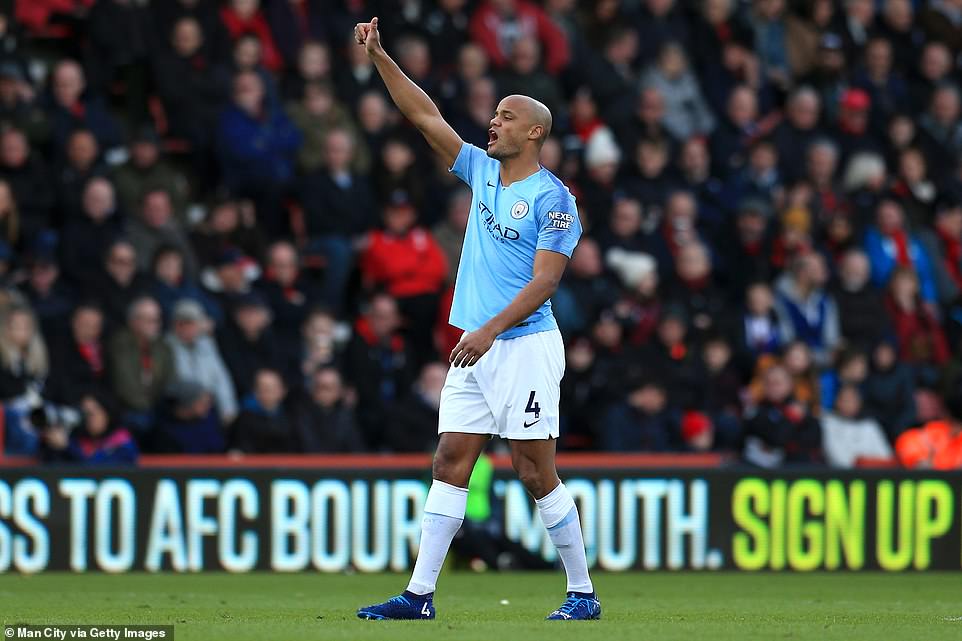 As Chelsea and Maurizio Sarri discovered, Bournemouth can be quite the team when the mood takes them. Eddie Howe’s team were open and defensively dreadful at Arsenal during the week and the 5-1 scoreline actually flattered them.

On this occasion, Bournemouth arrived with a plan to frustrate and a five man defence that was fiercely protected by a dogged team performance. David Brooks, a player that City let go as a 16-year-old schoolboy, returned to midfield and added poise and quality to Bournemouth’s performance.

Yet for all Bournemouth’s tenacity and spirit, there was always a sense that they may tire and that City could work through the gears and so it proved.