Sixth in the Premier League and now into the quarter-finals of the Carabao Cup, no challenge is fazing Bournemouth right now.

Norwich certainly lived up to the ‘dangerous’ tag Eddie Howe had given them pre-match, but even the Cherries’ second string proved too strong for them.

Those fringe first-teamers have guided Bournemouth to the last eight of this competition for only the third time in their history. 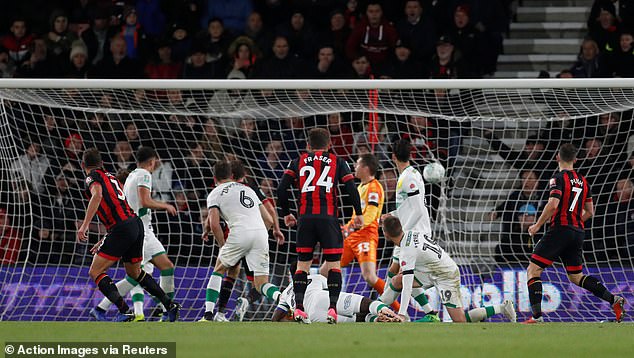 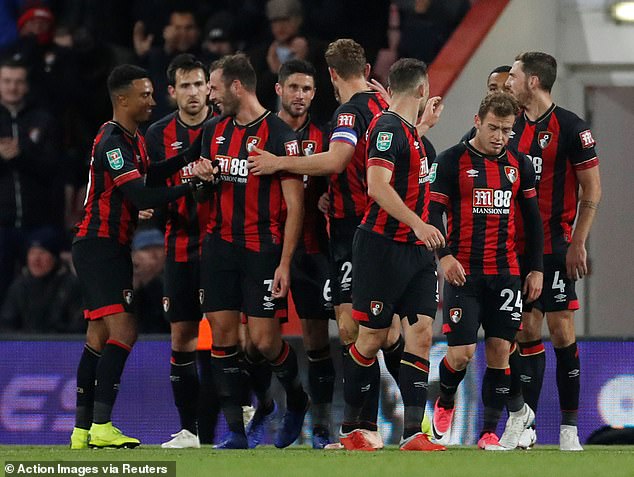 If the draw is kind, there’s no reason – on form – why Bournemouth can’t reach a first major final at Wembley. They have every right to dream.

Junior Stanislas – scoring his fourth goal in four starts at the Vitality Stadium, as many as his previous 14 – handed them a first-half lead but Onel Hernandez’s equaliser was all the visitors deserved having created so many opportunities throughout a tense contest.

But up stepped Steve Cook, ramming the ball home in a chaotic penalty area after Marc Pugh’s effort had been blocked to keep Bournemouth on their merry way in what could become a historic season. 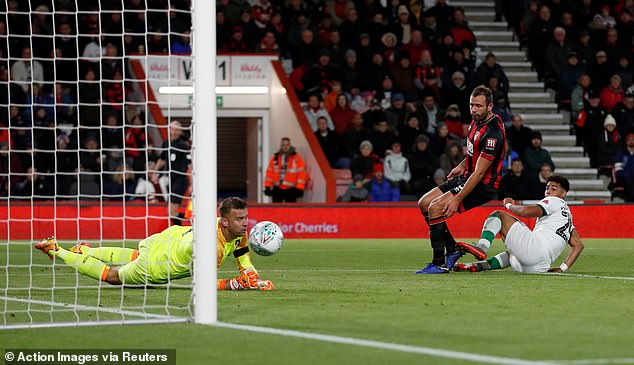 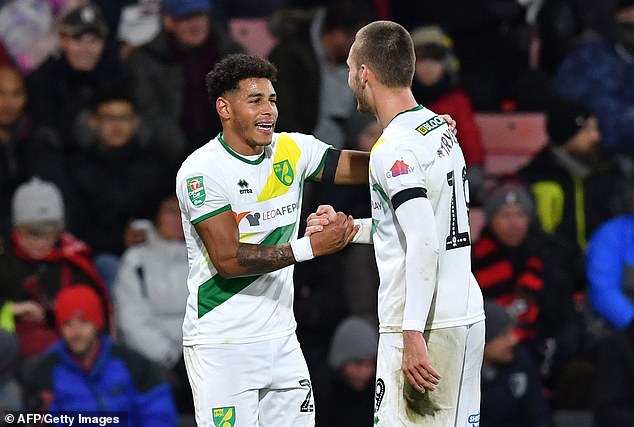 It felt fitting that Cook, a Bournemouth stalwart at the back since their League One days, should score what is potentially such an important goal.

We all know that winning trophies requires moments of perseverance and also ruthlessness – and there was both for Bournemouth.

It was a reflection of the teams’ lofty positions in their respective divisions that both managers decided to make eight changes.

While it was abundantly clear the Carabao Cup is no one’s top priority, despite the lure of a quarter-final place, both gave it a good go in the first-half. 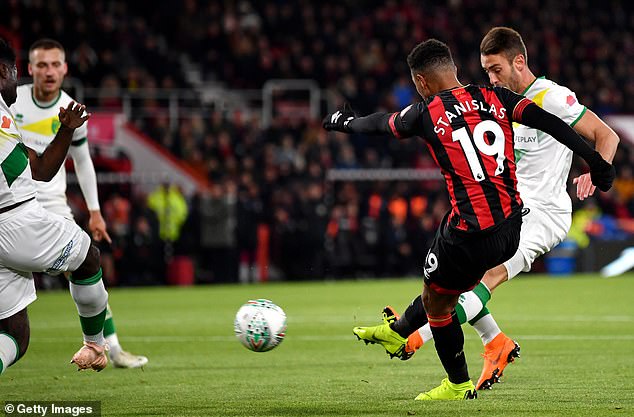 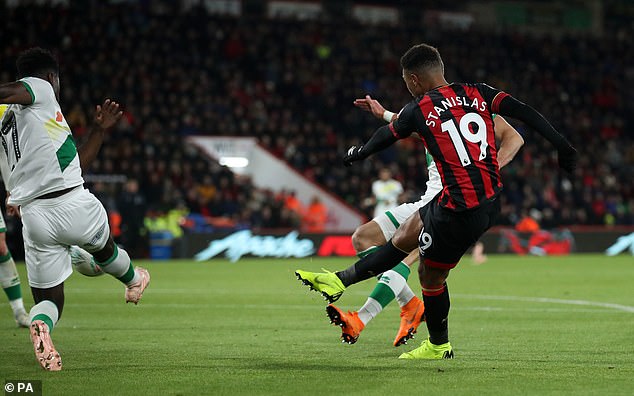 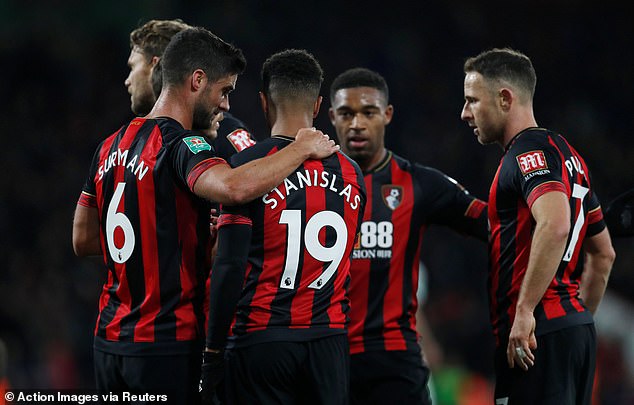 Daniel Farke set up with five strung across midfield but rather than being defensive, this meant the Championship visitors had plenty of punch on the counter. Indeed, they had several excellent chances.

Inside two minutes, a neat combination between Hernandez and Mario Vrancic opened Bournemouth up, the latter’s eventual shot pushed away by Artur Boruc.

Bosnia international Vrancic then pinged a superb ball to Felix Passlack, who forced the Bournemouth defence into retreat before firing across goal and wide.

Vrancic also slipped a lovely through pass to set Dennis Srbeny clear, but Boruc spread himself and blocked the attempted dink shot with his chest. Moments later, Vrancic weaved past two defenders and fired not too far off target.

And in first-half stoppage time, Hernandez teed up Srbeny for a strike that cracked back off the inside of the post before a panicked Bournemouth clearance. 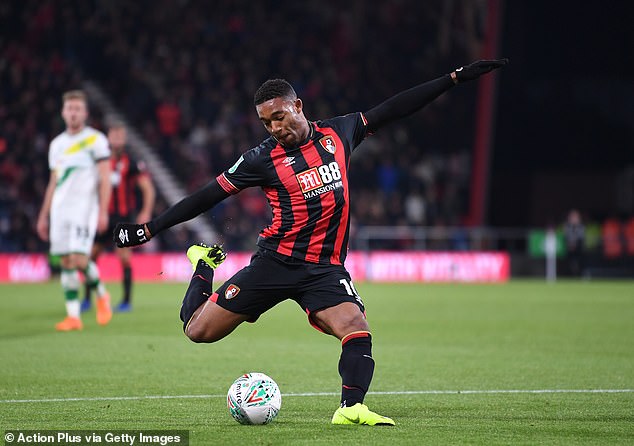 With all these openings for the visitors, it took a real moment of quality for Bournemouth to gain their 39th-minute lead.

Stanislas has played a bit-part role since his return from a six-month lay-off with a serious knee injury, but the Carabao Cup is offering a salvation.

A scorer against Blackburn in the last round, the ball came to him down the left channel after Jermain Defoe’s expert control and pass. 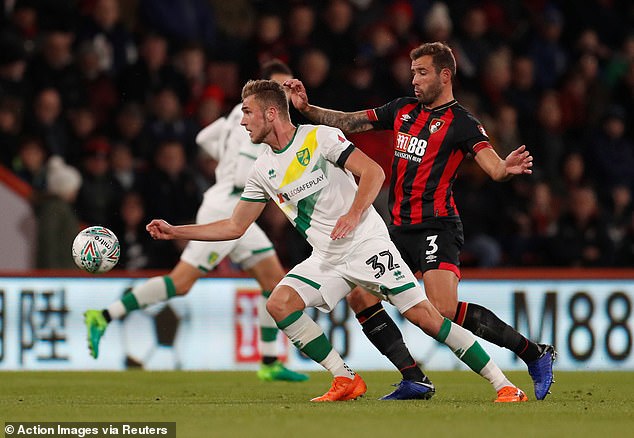 Stanislas took on the defenders, drove inside the box and, after a couple of distracting step-overs, produced an emphatic finish across keeper Michael McGovern and into the top corner.

Norwich continued to threaten after the break and levelled when Hernandez, off-balance, managed to sweep the ball into the far corner after Tom Trybull had dinked a gorgeous ball over Bournemouth’s defence.

And there were nervy moments late on when Hernandez cut inside Diego Rico before firing into the side-netting, fooling some of the travelling fans into thinking they’d forced a shoot-out.

A better chance came the way of Jordan Rhodes in the fourth of seven minutes of injury time, but he somehow headed wide from just a few yards out. 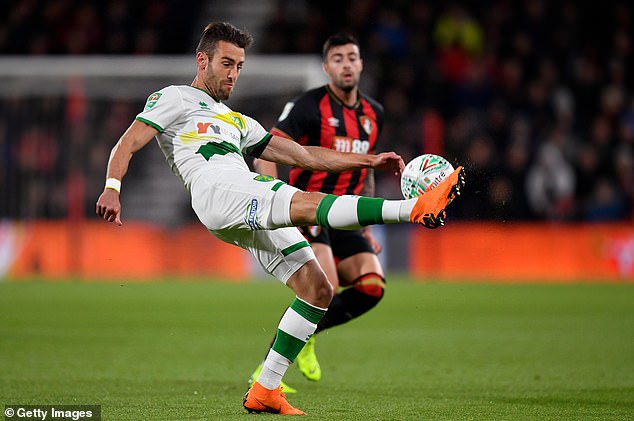