Brendan Rodgers has confirmed that Jamie Vardy should be fit to face Manchester United at the King Power Stadium on Boxing Day.

Vardy is the Foxes top-scorer this season with 13 goals in all competitions but he had to be substituted two minutes from time in Sunday’s 2-0 win at Tottenham.

The striker scored the opening goal from the penalty spot and forced Spurs defender Toby Alderweireld into a mistake that led to him heading the ball into his own net before Vardy had to come off in the closing stages.

Rodgers said: “Vardy will be fine for the game. It’s just a bit of soreness. It will be pretty much the same squad.

“(Caglar) Soyuncu may be close. If not for Saturday, he could be ready for Monday [away to Crystal Palace].” 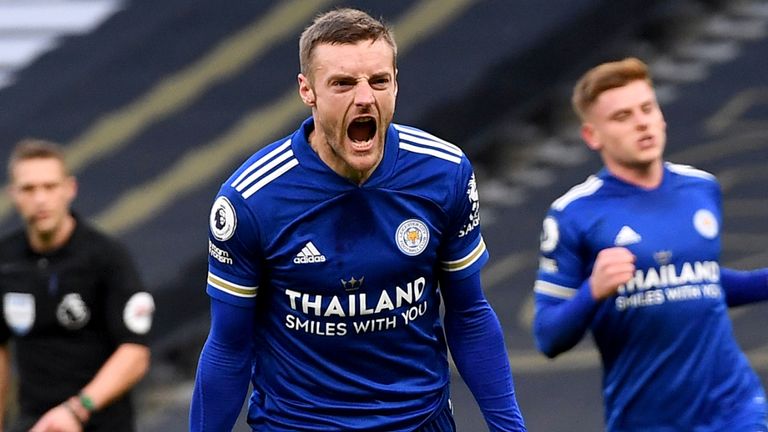 Rodgers’ opposite number at Manchester United, Ole Gunnar Solskjaer, has come under pressure after an indifferent start to the season.

They were knocked out of the Champions League at the group stages but six wins and a draw from their last seven Premier League matches has seen them rise to third in the table going into the busy Christmas schedule.

United are also in the quarter-finals of the Carabao Cup where they will face Everton on Wednesday – live on Sky Sports – and Rodgers was full of praise for Solskjaer.

“I think Ole’s doing a fantastic job. They’ll be disappointed to go out of the Champions League because it’s a competition they have history in,” added Rodgers.

“Ole has reshaped the club in terms of the values, and he’s looking to develop young players. I think he’s done a very good job. They’ve got big quality.”

Leicester themselves are second in the Premier League following their victory at the Tottenham Hotspur Stadium.

Rodgers and his squad have also been backed by substantial support off the pitch and will train at their new £100m state-of-the art facilities for the first time on Christmas Eve.

Located in Seagrave in North Leicestershire, the new training complex has 12 football pitches, a nine-hole golf course, a hotel, and impressive training and medical facilities spread over 185 acres.

Building delays and complications caused by the coronavirus pandemic mean the squad are moving in three months later than planned, but Rodgers is excited by the possibilities it brings.

Rodgers said: “It’s one of the best facilities in the world. It’s also a sadness to leave a training facility. We’ve been at Belvoir Drive for 56 years, but the legacy is that the women’s team move in.

“It’s the biggest investment the new owners have made. It really underlines their commitment to developing players.

“On the recovery of players, the facilities are elite for sports science. Recovery is such an important aspect in modern football, with the speed and intensity of the games.

“We have rooms for players to rest in too. In terms of recruitment of players, it will really help. We will always be in the market for a certain level of player.

“We don’t have £50m to spend on one player, but being able to bring in talented players, when they see the facility, that will help no doubt. We’re moving into an elite venue.”