‘I scored five in 20 minutes… and I got 80p a goal!’: Brian Dear relives his feat for West Ham against West Brom

When Sergio Aguero scored five in 20 minutes for Manchester City against Newcastle three years ago, the accolades flowed as fast as the goals, though not in Brian Dear’s house. There, the attitude was, well, who’s not done that?

When Jermain Defoe scored five for Tottenham against Wigan in 2009, Dear would encounter the Spurs striker who would see the look on the old player’s face and say: ‘I know, Brian, I know.’

What Defoe knew was that back in 1965, 50 years before Aguero, Dear had also rattled in five goals in 20 minutes in a top-flight match. Defoe had taken all of 36 minutes for his five against Wigan, so he knew of Dear’s achievement. 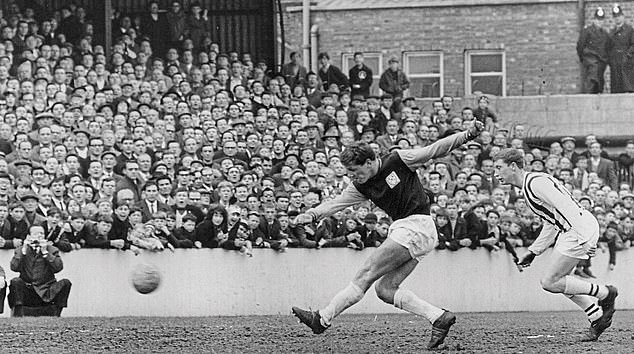 Those were the days. Those were the days when a striker could earn less than £1 a goal. Not that Dear was complaining. Part of a remarkable feat against West Bromwich Albion was that this was Dear’s 16th match for West Ham. He was a 21-year-old happy to get a place in an accomplished team.

Having made his Hammers debut as a teenager three years earlier, Dear was mainly in the reserves at a time when there were no substitutes — a rule changed for season 1965-66.

When Johnny ‘Budgie’ Byrne was injured playing for England, Dear was given his chance by Ron Greenwood. In 15 matches from March to May 1965, Dear scored 14 times and won the European Cup-Winners’ Cup in front of 98,000 at Wembley. He had a goal disallowed in the final. 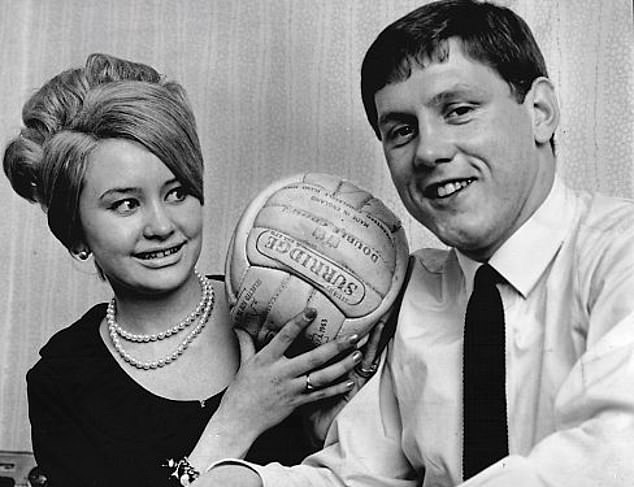 It turned out to be the spring and summer of his West Ham career, and in its midst was this five-goal glut on Good Friday morning.

Dear was born in Plaistow in 1943 — ‘a war baby’ — and grew up in Hatherley Gardens 300 yards from Upton Park. There, he watched the likes of Billy Dare and Noel Cantwell. Dear played for England schoolboys and was signed by his local club under manager Ted Fenton.

‘I hadn’t been playing that much,’ says Dear, ‘but then Budgie got injured and I was put in against Sunderland at home. I scored two. They scored three. After the match, Ron Greenwood said to me, “You’ve got a passport, haven’t you?” I nodded, and he said I was going to Lausanne.’

West Ham had won the FA Cup in 1964, beating Preston in the final, and entered the Cup Winners’ Cup. Ghent and Sparta Prague were beaten and West Ham faced Lausanne in the last eight. Dear scored the first in a 2-1 away win and then got two more in the home leg.

In the semi-final against Real Zaragoza, Dear again scored the first, this time at Upton Park, while also getting goals against Aston Villa and Leeds in the First Division. 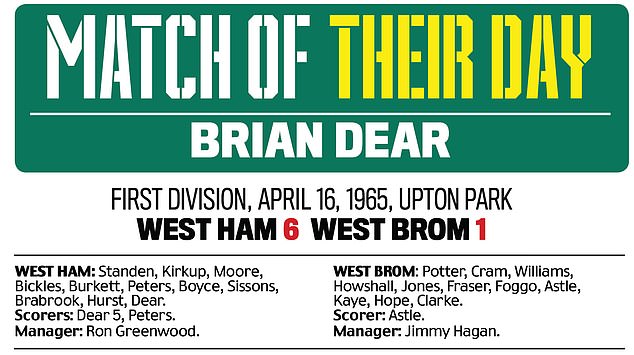 Then came West Brom: ‘It was Good Friday, an 11 o’clock kick-off, and there were probably a few headaches in the East End.’

The game was goalless until Martin Peters scored on the half-hour. According to Trevor Smith in the Newham Recorder, this was baffling as West Brom ‘started with a barely concealed disinterest’. Once the scoring began, Smith could add: ‘This attitude reaped the hiding it deserved.’

Dear made it 2-0 on 44 minutes — ‘It was close in, a cross from the right,’ he recalls — but Jeff Astle pulled one back for West Brom a few seconds later. It was 2-1 at half-time. Then Dear scored four in 18 minutes.

Ray Potter in the Albion net made a mistake to take it to 3-1 on 53 minutes and then, Dear says: ‘I think Johnny Sissons crossed and I hit it on the volley. They were all close-range except for the one that went through Potter.’ By the 64th minute it was 6-1 and Dear had five. He kept the ball, was photographed with it and years later sold it to the West Ham chairman Terence Brown.

Dear was to stay at Upton Park until 1969. He had brief spells at Fulham and Millwall before returning to West Ham in 1970.

He then ran pubs, as ex-pros did, joined the catering trade and when Bobby Moore became Southend United manager in 1984, Dear joined his old Hammers colleague at Roots Hall. Today Dear is a Southend club ambassador.

He broke English records for scoring speed that day against West Brom, and it was the biggest individual Hammers haul since the legendary Vic Watson hit six in 1929 against Leeds.

‘And then of course,’ Dear adds, still laughing, ‘a couple of years later Geoff Hurst goes and scores six against Sunderland.’