Brighton set to snub loan offers for starlet Evan Ferguson with striker, 18, ready to be part of Roberto de Zerbi’s first-team squad for rest of the season following phenomenal start to his Premier League career

Brighton are ready to block any proposed loan move for striker Evan Ferguson following his latest performance against Everton on Tuesday night.

The 18-year-old Irishman, making his first Premier League start, stroked home Jeremy Sarmiento’s cross into the top corner against Everton to become the youngest player to score in consecutive top-flight games since Federico Macheda for Manchester United in 2009.

Ferguson scored after coming on against Arsenal on New Year’s Eve and that followed his top-flight debut as a late substitute in the Seagulls’ 3-1 win at Southampton on December 26. 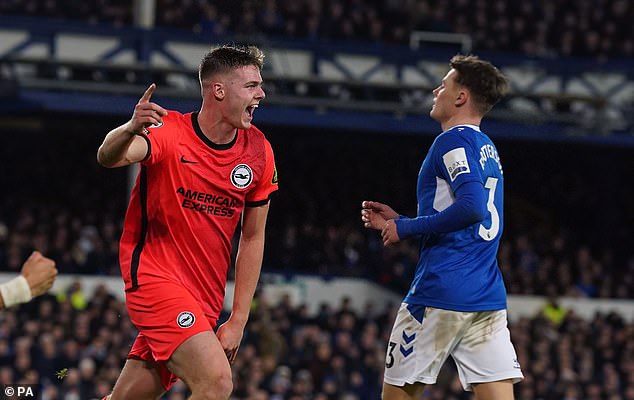 Burnley, Swansea City, West Brom, Blackburn Rovers, Ipswich and Derby County had all been making overtures to Brighton in the hope he would become available on the loan market this month.

However, his excellent form has prompted a re-think and he is now expected to stay as part of Roberto de Zerbi’s first team squad and could yet earn a new contract before the end of the season.

Teammate Solly March, who benefited from Ferguson’s assist to score Brighton’s third against Everton, has been suitably impressed.

‘As an 18-year-old coming in for his first Premier League start, it’s phenomenal really,’ March said. ‘He’s strong, he’s quick, he holds the ball up well and he scores goals – so we’re delighted with him. 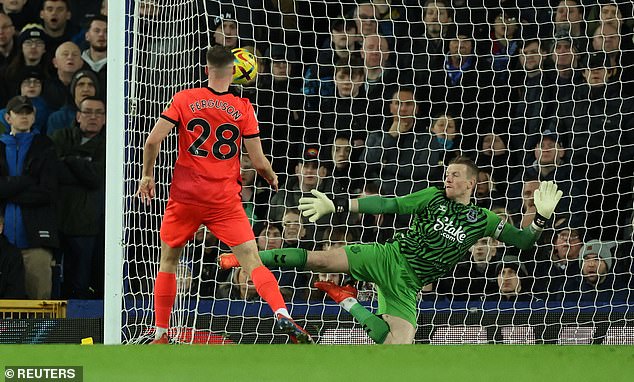 ‘He’s a different player to what we’ve had in recent games. It’s nice to have that big figure in the box who you know when you cross balls in, he’s going to hold it up.’

‘He is a very good player, very young, but the quality is very clear to everyone at Brighton,’ said the manager. ‘He works for the team and I want players who do that. He has physical and technical quality and knows the way to score. That is very important for us.’

Ferguson said: ‘Buzzing with the result and getting another goal. I feel comfortable. Being in with lads every day, they push you. You have to keep working and working. It is good.’

Rafa Benitez secures a visa to return to China