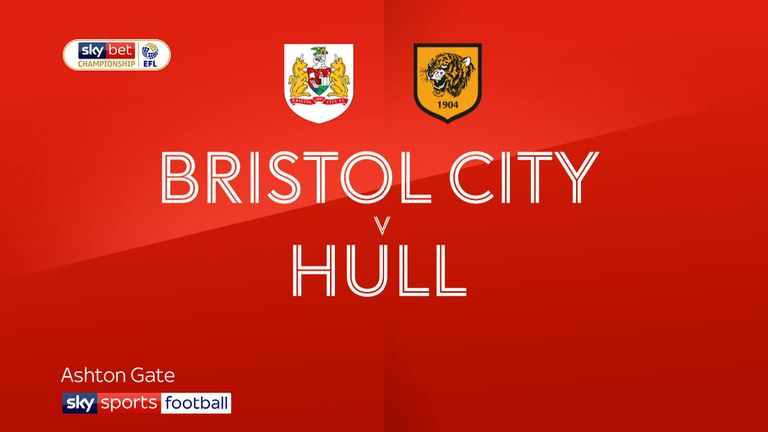 Famara Diedhiou headed in a stoppage-time winner as Bristol City stepped up their Championship play-offs challenge with a 1-0 victory over Hull at Ashton Gate.

Visiting goalkeeper David Marshall, who had made some fine saves, could only parry a shot from substitute Matty Taylor and Diedhiou nodded home the rebound from 10 yards to secure all three points.

It was rough justice for a Hull side who had contributed much to an open game. But Bristol created more chances and just about deserved the points.

The corresponding match last season ended 5-5 and there were enough chances for both sides in an entertaining first half for a repeat of that scoreline.

Hull could have been ahead inside two minutes when Todd Kane eluded a weak challenge from Jay Dasilva and crossed for Kamil Grosicki, whose close-range shot brought a fine save on his line from Max O’Leary.

The hosts responded quickly, with Niclas Eliasson’s shot from the corner of the box pushed around a post by Marshall, who also had to save from Jamie Paterson and Eliasson again inside the first 15 minutes.

Hull were dangerous themselves, Chris Martin sending an overhead kick wide and Grosicki firing across goal with no team-mate able to get a touch.

It was nip-and-tuck as Paterson fired inches wide and at the other end Jarrod Bowen’s left-footed effort from inside the box went just past the far post.

Josh Brownhill went closer still for the home side on 39 minutes, sending a right-footed shot from 20 yards against the foot of an upright.

The only surprise at half-time was that neither side had capitalised on some slick, attacking football and some poor defending. Straight after the interval Hull’s Tommy Elphick headed just wide from a right wing corner.

Marshall produced a stunning save at full stretch to keep out a deflected shot from Tomas Kalas as Bristol City began to turn up the heat. Then Diedhiou was just off-target with a 64th minute shot.

Hull had already made two substitutions when central defender Jordy De Wijs was injured in a clash of heads with Diedhiou. Nigel Adkins sent on Fraizer Campbell and shuffled his pack, with an earlier replacement Robbie McKenzie moving alongside Elphick at the back.

Chances had dried up and the home crowd were getting frustrated. Bristol City coach Lee Johnson also made three second-half changes in a bid to find a cutting edge.

Campbell headed wide when unmarked for Hull just after seven minutes of stoppage time had been signalled.

It proved a costly error as Diedhiou settled the match, with Taylor having another shot saved by Marshall in a thrilling finale.

Norwich vs Liverpool live stream: How to watch Carabao Cup fixture on TV and online