Bruno Fernandes insists he can “give more” despite shining during his first month as a Manchester United player to land the Premier League’s Player of the Month award.

The Portuguese moved to Old Trafford in January for an initial £49.5 million from Sporting.

His scorching start to life in red has seen him inspire Ole Gunnar Solskjaer’s side and their pursuit of a top four finish.

His form has now been rewarded with his first Player of the Month award, beating out Marcos Alonso, Pierre-Emerick Aubameyang, Dominic Calvert-Lewin, Matt Doherty and Nick Pope.

An assist in the 2-0 win at Chelsea was followed by a goal and an assist in the 3-0 win over Watford, with the 25-year-old admitting he has fulfilled a dream to play for the club. 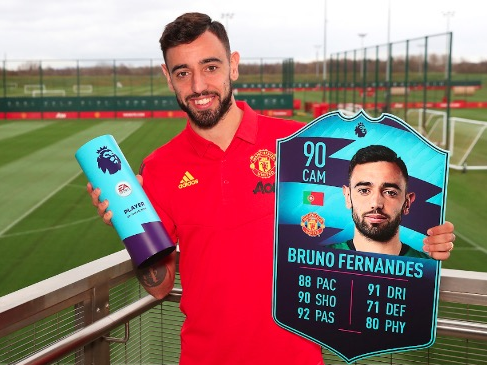 “Since I was a kid it was a dream to play for Man United, and to be there at Old Trafford is the biggest dream of my career,” Fernandes said after picking up his award.

“When you come to a new club you always want to score, and the first goal is special. It doesn’t matter how the goal is scored, but important is the goal’s worth.

“I’m happy with my start, but from now I need to give more, to be better.”