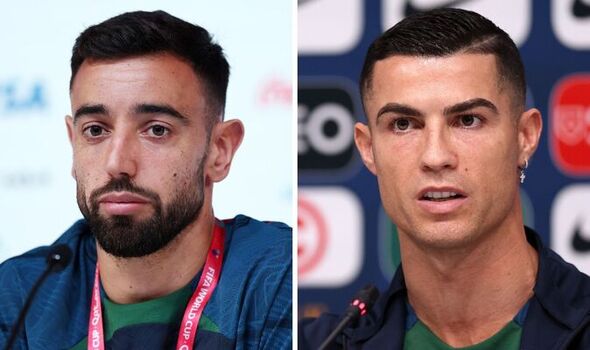 Bruno Fernandes has insisted that his respect for Cristiano Ronaldo will not be tarnished by the five-time Ballon d’Or winner’s acrimonious exit from Manchester United earlier this week. It was revealed on Tuesday that the Red Devils had parted ways with Ronaldo by mutual consent and would not be paying off the rest of his lucrative deal at Old Trafford, which was scheduled to run until the end of the current season.

The nature of Ronaldo’s exit in the wake of his tell-all interview with Piers Morgan earlier this month raised questions over whether the harmony of the Portugal squad would be affected at the World Cup, with the 37-year-old set to lead his country into battle against Ghana on Thursday evening. However, Fernandes has since played down rumours of a rift between the pair by insisting that his relationship with Ronaldo has not been damaged in spite of the latter’s departure from United.

“I don’t feel uncomfortable with Cristiano, I don’t have to pick a side,” Fernandes told reporters. “It was a privilege to play with Crist at the club, a dream and I’ve always said that. He has always been an inspiration for me.

“It was a dream come true to be able to play with Cris. It was great for me and good while it lasted. Cristiano took a different decision for his life, his career, and we have to respect such decisions.

“Every decision has to be respected. We as players – but also as parents and brothers – know it might be difficult to take some decisions. But these decisions have to be for the wellness for ourselves and our families.”

For the latest news and breaking news visit: /sport

Arsenal target Buendia 'accepts he must wait until summer' to leave