Report and highlights from the Sky Bet Championship clash between Cardiff City and Stoke City at the Cardiff City Stadium as Mick McCarthy’s Bluebirds were held to a goalless draw by the Potters on Tuesday night.

Joe Allen saw his 91st-minute header crash against the crossbar to leave Stoke still searching for their first away win since December 2 as they recorded a goalless Championship draw at Cardiff.

This was Stoke’s 11th game in a row away from home without victory and, had top scorer Nick Powell not fluffed his lines in the first half, and Allen’s header hit the mark from eight yards, then it could have been a different story.

After a long trek to the north east last weekend where they were beaten 3-0 at Middlesbrough, Stoke made it 600 miles in four days as they headed to south Wales in search of their first away win since edging lowly Wycombe 1-0 last year.

Cardiff had also been beaten four days earlier – 2-1 at home to Watford – and were looking to stay in touch with the teams just above them in the play-off places.

The game got off to a flying start and there were early chances at both ends. 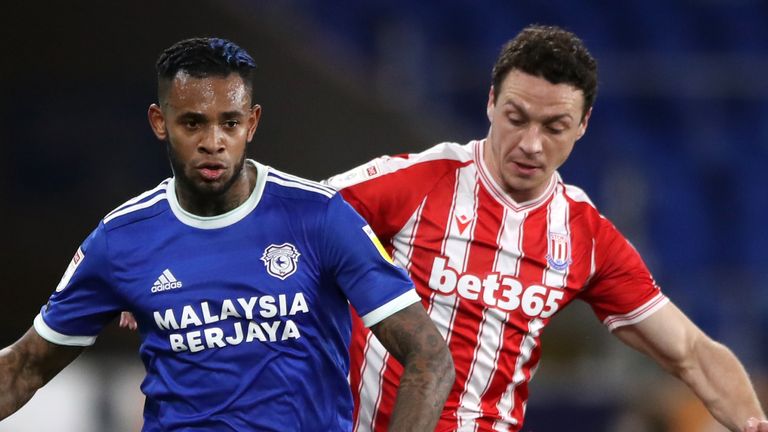 Stoke won back-to-back corners, the second of which came after a Rhys Norrington-Davies shot had been deflected inches wide of the left post.

Cardiff hit back with a fierce shot from Leandro Bacuna that forced Adam Davies into a reaction save after a quick break, but the better chances fell to the visitors.

Steven Fletcher forced a save out of goalkeeper Dillon Phillips as he flicked at a cross and, from the rebound, Jordan Thompson’s effort was cleared off the line by Perry Ng.

After such a close shave, the home defenders should have been on high alert, but a brilliant pass from John Obi Mikel to Fletcher on the edge of the home ‘D’ tore them apart in the 20th minute.

Fletcher controlled the ball superbly with his back to goal and then laid it off to his left for the onrushing Powell.

With only the goalkeeper to beat, Powell should have taken his tally for the season to 12, but instead he fired wide of the target in what was the biggest chance of the half, while Cardiff had their best opportunity to break the deadlock on the stroke of half-time.

Kieffer Moore was brought down 25 yards out and Will Vaulks swung the resulting free-kick to the far post. Sean Morrison came sliding in but missed the ball by a few inches with the goal at his mercy.

Bacuna had a shot blocked three minutes after the break that dipped just over the crossbar and then Moore missed the target from close range following a long throw in by Vaulks.

Moore had the chance to add to his 16 goals this season in the 80th minute when Jonny Williams and Bacuna set him free.

A heavy touch from the Wales midfielder then let him down and allowed Davies to gather and then Moore sent a left-footed volley wide of the mark.

Right at the death Allen hit the crossbar with a header that would have won the game but the spoils were shared.