Mick McCarthy is still searching for his first victory as Cardiff manager after Kieffer Moore rescued a 1-1 draw against Millwall.

​​​​​It was the second time this week the Wales striker had salvaged a point for the Bluebirds after his late header against Barnsley in midweek.

Aden Flint’s early own goal looked like it was going to be enough to take the Lions above Cardiff in the Championship table, but Moore’s leveller ensured the teams remain locked 11 points adrift of the play-off places.

McCarthy switched to a back three after watching his side battle back from two goals down to secure a draw at Oakwell in his first game in charge. 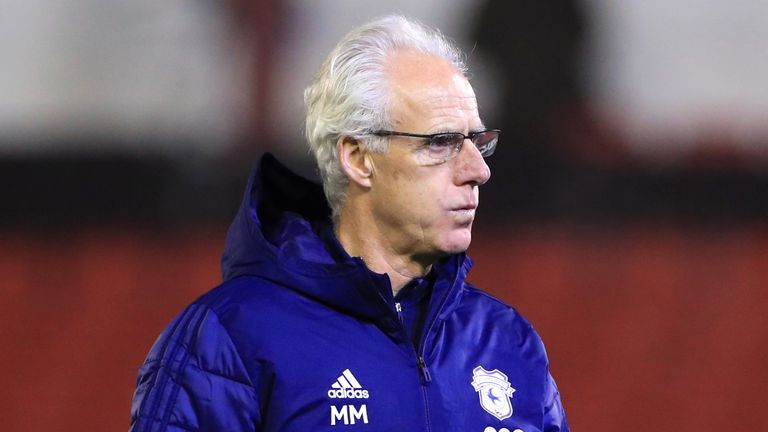 Joe Bennett was tasked with providing width in the left wing-back role in place of Joel Bagan, and Junior Hoilett was sacrificed in attack for the defensive solidarity of captain Sean Morrison.

Millwall were out to continue their promising form after picking up four points from their last two Championship matches against Watford and Huddersfield.

Manager Gary Rowett stuck with the same XI who secured a point against the Hornets in midweek as his side aimed to leapfrog the Bluebirds.

And they were gifted the perfect start in the ninth minute courtesy of the Cardiff defence.

Morrison headed a long ball forward straight into the path of Jed Wallace, who surged down the left flank and attempted to play the ball across the face of goal.

Flint got back to cut out the cross, but only succeeded in putting the ball past Alex Smithies and into his own goal.

Moore missed the chance for a second headed goal in a week when he failed to find the target from five yards out after an accurate Joe Ralls cross.

Cardiff should have been punished by their former striker Kenneth Zohore, who had the whole goal to aim at after Wallace found him in the box, but he dragged his effort wide.

Moore’s aerial threat troubled Millwall again at a corner late in the first half, but Maikel Kieftenbeld raced back to clear off the line to keep the Lions in front at half-time.

Zohore had another clear-cut chance two minutes after the restart when he was played through on goal by Ryan Woods, but this time he was denied by a reaction save from Smithies.

Bennett then headed inches over the bar from a Will Vaulks cross as Cardiff pushed for an equaliser.

McCarthy brought on Harry Wilson and Josh Murphy to add some creative spark as the clock ticked past the hour mark.

And the Wales playmaker made the difference in the 71st minute when his perfectly-weighted through-ball allowed his international colleague Moore to run onto the ball and chip it over the onrushing Bartosz Bialkowski to level the scores.

Zinedine Zidane: Real Madrid will adapt to playing at B team stadium