Celtic 1-1 Hibernian: Neil Lennon’s depleted side concede stoppage-time goal in dour draw to lose further ground on Rangers in the title race… after being without Christopher Jullien and 13 other players after controversial training camp in Dubai

They did not pay the ultimate price for their ill-advised attempt to squeeze a sunshine break into a pandemic-ravaged season.

On a night of torrential downpours in Glasgow, however, there was something fitting about Celtic’s last lingering hopes of ten in a row being washed away in the cold Scottish rain.

A shadow XI losing an injury-time equaliser to hopelessly out-of-form Hibs felt, quite frankly, like the perfect embodiment of the mood that has surroundings Scotland’s reigning – only just – champions for so long now.

In a season of endless unrest, a campaign of poor decisions and unintended consequences, ropey recruitment and questionable crisis management, Neil Lennon’s men do seem intent on finding new and unusual ways to torture their supporters. 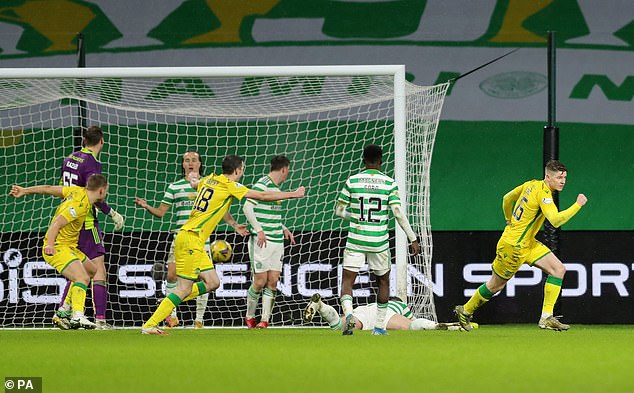 The debacle surrounding last night’s game, a fixture that went ahead without the presence of Lennon, John Kennedy and 13 members of the first-team squad, represented merely the latest instalment in a litany of suffering for Celtic fans.

Although first-team coach Gavin Strachan managed to guide a weakened but not quite enfeebled Celtic XI – a mix of familiar and youthful faces – to a creditable point, few among the Hoops family will have celebrated an against-all-odds moral victory.

Sure, David Turnbull scored a peach of a free-kick to tease a bit of joy out of the fanbase with less than ten minutes remaining.

But Kevin Nisbet pounced from close range with the 90 minutes expired, delivering just the kind of dull one that has become commonplace for Celtic this season.

Hibs were never happy about this game being moved back by 48 hours in order to accommodate Celtic’s jet-setting jaunt.

They weren’t all that thrilled, either, to be facing a patched-up home squad without the benefit of further testing of everyone involved. Well, you can’t be too careful these days, right?

The fears of Hibs players – and their families – were hardly without foundation. They harboured genuine concerns of becoming collateral damage to a row that, without being overly dramatic, threatens to nudge Scottish football right back into a second lockdown.

None of which, of course, will even have crossed the minds of those Celtic decision makers who signed off on ‘the break’.

Yes, amid the chaos and cries of outrage that accompanied the reigning champions all the way home from Dubai, a heavy dose of irony also lingered around this mid-season debacle.

Because Neil Lennon took his men to the Middle East in pursuit of a more perfect brand of big-club preparation. 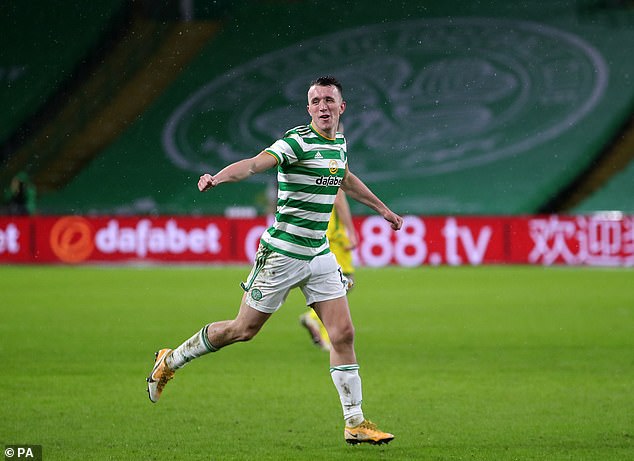 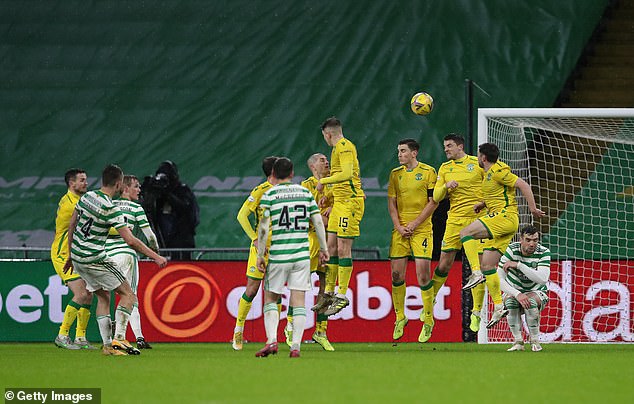 Turnbull won, took and scored a fine 20-yard free-kick after a foul on him by Stephen McGinn

The intent was to fine-tune a misfiring side. To recharge batteries and reset attitudes. Suitably refreshed and ready to resume their faltering title defence, they’d return to Scotland ready to hit the ground running.

What could possibly go wrong? Everything. Absolutely everything. And you could forgive Celtic fans for feeling beyond frustrated by events.

The latest banner to be displayed outside of the ground yesterday, this one depicting Peter Lawwell as Comical Ali (look it up, kids), provided a reminder that Lennon isn’t the only figure being held accountable.

Nor is there any doubt that, in this instance, the Hoops must take full and total responsibility for the latest misfortune to befall them in his season of socially-distant de’il take the hindmost. 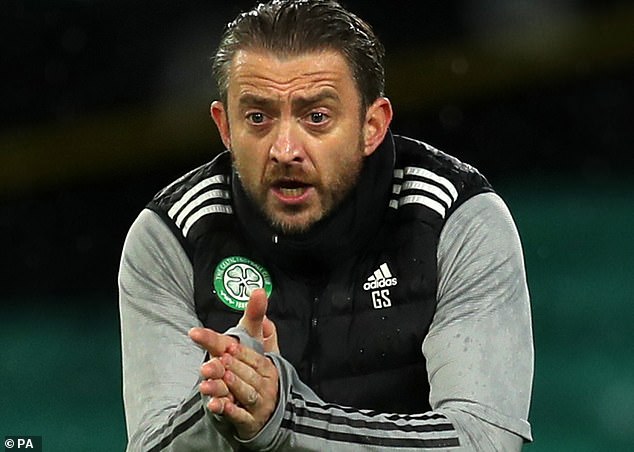 Victims of Boli Bolingoli’s lockdown-breaking idiocy, they were also hard done by when a number of their players were forced to self-isolate as a result of international exposure.

And they were more sinned against than sinning when fans broke all social distancing guidelines during violent protests outside of Celtic Park just last month. Not that some politicians made the distinction.

But this? Just hold your hands up and take the flak. And forget trying to hide behind the defence cited in yesterday’s statement, where it was argued that ‘a case could well have occurred had the team remained in Scotland.’

It didn’t, though, did it? And Celtic themselves effectively concede the squad members forced to self-isolate came into contact with Christopher Jullien during air and coach travel – both of which would have been avoided had the team been training at Lennoxtown as usual. 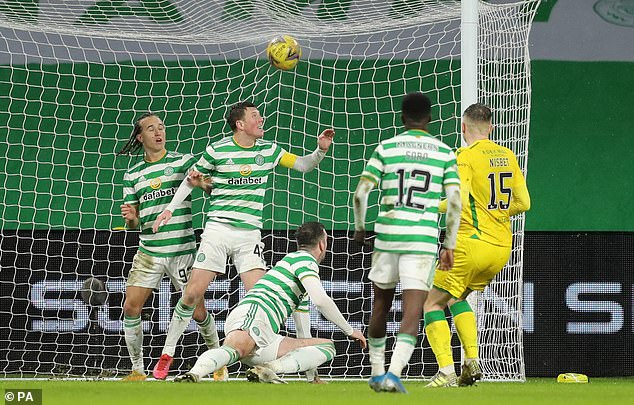 Fortunately for stand-in gaffer Strachan, his club’s strength in depth at least avoided the prospect of us witnessing – ahead of schedule and at a higher level than intended – the full debut of a Celtic ‘colt’ team in senior SPFL competition.

Five of his starting line-up would probably make a case for being among the strongest XI available in any circumstances, with Callum McGregor, Ismailia Soro, Jeremie Frimpong, Diego Laxalt and – most obviously of all – David Turnbull all regulars..

They took a while to settle, right enough, with Kevin Nisbet and Joe Newell both testing Scottish Cup-winning goalkeeper Conor Hazard with crisp strikes. Gradually, though, Celtic began to assert at least some degree of control in the middle of the park – thanks mainly to the efforts of Soro.

When Mikey Johnston caught Joe Newell in possession, young Cameron Harper really should have squared to one of Tom Rogic or McGregor in the danger area, instead of shooting from a tight angle into the side netting.

Soro and Laxalt both then tested on-loan Arsenal keeper Matt Macey from distance, the goalkeeper doing well on each occasion, before McGregor pulled an effort wide following a delightful Turnbull dink over the Hibs back line.

The visitors introduced Lewis Stevenson or his 500th Hibs appearance at half-time, before adding target Christian Doidge to the mix soon after.

Hazard made a brilliant save at the feet of Melker Hallberg just beyond the hour mark, a lovely pass by Newell opening up the Celtic defence.

But, again, Celtic always looked to have dangerous creative sparks capable of setting the game alight. Turnbull duly did just that, first winning and then converting a free-kick from the due of the D.

That was only the set-up, though, for more late drama. More hurt. More disappointment as a Stevie Mallan free-kick wasn’t cleared, allowing poacher Nisbet to pounce.