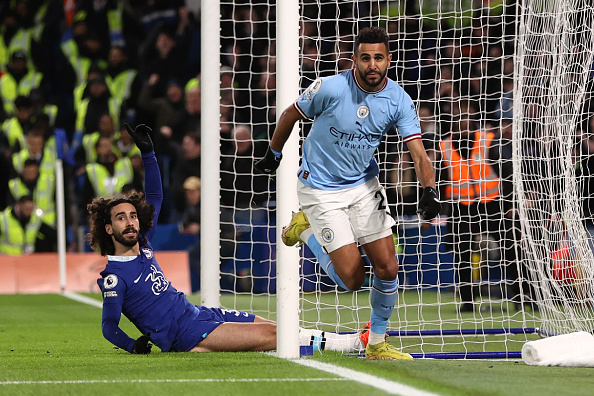 Mahrez slotted home at the far post (63) having been on the pitch for just three minutes as Jack Grealish provided the assist with a delightful ball across the six-yard box which evaded both Kepa Arrizabalaga and Marc Cucurella.

The result keeps City in second, five points behind leaders Arsenal after the Gunners drew 0-0 with Newcastle United on Tuesday, while Chelsea remain 10th and are 10 points off the top four.

It was a disastrous start for Chelsea with key players Raheem Sterling and Christian Pulisic forced off with injury after five minutes and 22 minutes respectively after Mason Mount also missed out on selection via a knock.

Both sides could only muster up one shot on target each in the first half with the best chance falling to Carney Chukwuemeka – who replaced Pulisic – as the Blues youngster cut in from the left with his fierce shot bouncing off the post.

Pep Guardiola’s side looked bright after the break, though, with Nathan Ake also hitting the post on 51 minutes with a headed chance at the back post following an impressive ball from Kevin De Bruyne.

Just 12 minutes later and City broke the deadlock with De Bruyne feeding Grealish down the left as he set up Mahrez to tap in at the far post.

Jack Grealish puts it on a plate for Riyad Mahrez and the Manchester City man makes no mistake with the simplest of finishes ð pic.twitter.com/qS5FPYz5ZS

It was the only goal of the game as City held on to secure a crucial victory at Stamford Bridge.

The result also means City have recorded a fourth successive win against the Blues for the first time in their history.

Guardiola’s side face Chelsea once again on Sunday – this time at the Etihad – in the third round of the FA Cup.

City’s next Premier League game falls on January 14 as they travel to face Manchester United in the second top-flight derby of the season while Chelsea take on west London rivals Fulham on January 12.

Diego Costa set for spell on sidelines with neck injury