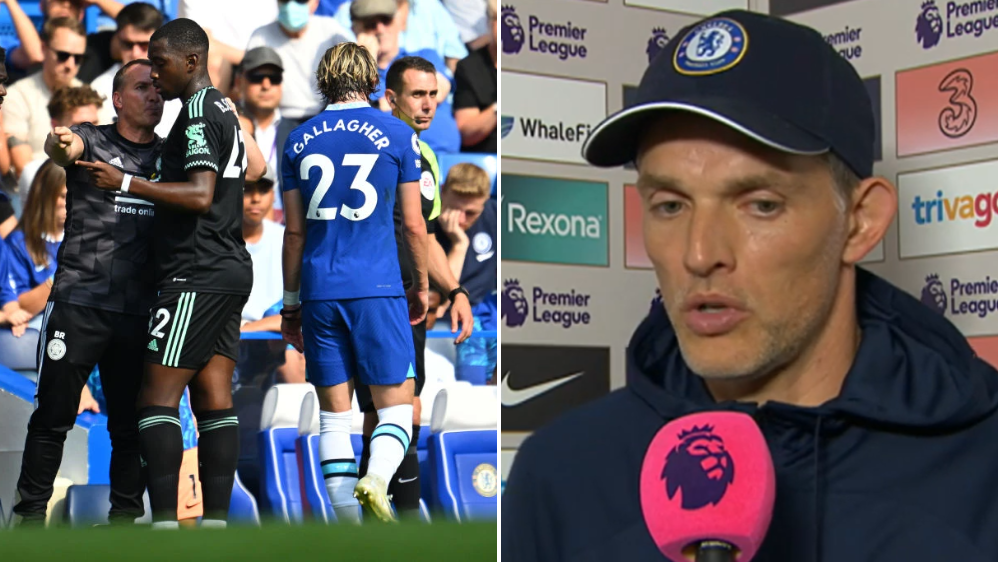 Thomas Tuchel slammed Conor Gallagher after the midfielder was sent off during Chelsea’s Premier League victory over Leicester City at Stamford Bridge.

Gallagher was dismissed before the half-hour mark for a second booking in the space of seven minutes.

While the red card put Chelsea on the back foot, a second-half brace from former Manchester City forward Raheem Sterling helped the hosts clinch a 2-1 win.

Tuchel said: ‘You can’t make the [second] challenge if you have a yellow card after 20 or 25 minutes. The challenge was a clear yellow card and gave us a huge disadvantage.

‘There was no reason to make this decision. He is responsible for what he did and of course he knows it was a huge mistake.’

Tuchel, who watched the match from a hospitality area after receiving a touchline ban for clashing with Tottenham counterpart Antonio Conte, added: ‘It was a good view, a lot of support around me and I have the experience now so there’s no need for a repetition.

‘I think we were in total control, had big chance, more than a chance with Ruben [Loftus-Cheek], had the penalty and marginal offside but it looked like not offside on our mobile devices.

‘Suddenly, you’re one man down with Conor. It was a bad decision from Conor and it gives you a disadvantage.

‘We were happy we hung in and showed the mentality that was needed to come away with the win.

‘Unfortunately, we conceded a goal that was not needed and then we were under pressure. We were lucky not to concede the equaliser but we did everything to have the chance and the reaction was very good.’

Tuchel also praised Sterling after he registered his first goals for the club following a £50m move from Man City earlier in the summer.

‘We need him to score, it’s what he does,’ Tuchel said. ‘I could feel he was not happy and wanted more chances, so we played a more aggressive shape in the first half. We needed him to step up and he did.’

Messi tips Brazil, France and Spain for success in Qatar