Chelsea are likely to complete a deal for Kai Havertz but Frank Lampard needs to sign at least four more players this summer, according to European football expert Julien Laurens. Bayer Leverkusen forward Havertz is reportedly very keen on moving to Chelsea in this window. The Germany international would be Frank Lampard’s third signing following the arrivals of Hakim Ziyech and Timo Werner.

But Laurens believes Chelsea’s spending will not be over once Havertz becomes a Blues player.

He says Lampard will still want to sign a goalkeeper, centre-back and a left-back, as well as bolstering his midfield options.

“It’s a good question [of who Chelsea will buy],” Laurens told ESPN FC.

“I think they’re certainly very ambitious in the transfer market, they’ve been already with Timo Werner and Ziyech. 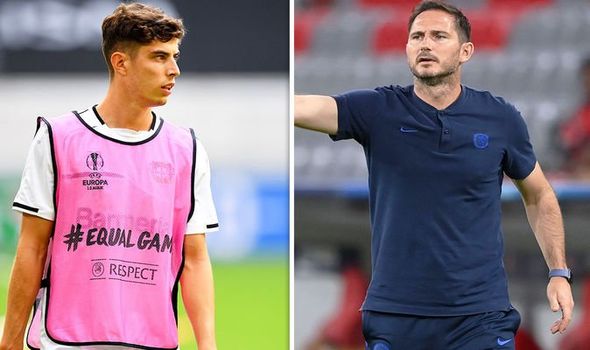 “I think Kai Havertz is likely to come too but they need a goalkeeper, that would cost a fair bit.

“They need a left-back, they need at least one centre-back, another midfielder, and then if you’ve got Havertz then I think you’ve got another going forward.

“But this is not easy and you do wonder after what Lampard said on Saturday, what happened in January?

“How come they didn’t sign anyone in January when they could have?”

Chelsea crashed out of the Champions League at the last-16 stage on Saturday with a 7-1 aggregate loss to Bayern Munich.

After the match, Lampard confirmed he would be looking at making further additions to his squad.

“We’ll look at that [recruitment], because that’s our job, we’re very joined up on that already,” Lampard said.

“From having a transfer ban (last summer) you feel we’ve missed where other clubs have spent and improved, and recruitment is a huge part of this game.

“Nights like this in a footballing sense, show me a lot, tell me a lot.

“So it’s a conversation now, the season is ended, it’s a very quick turnaround, so now is the time to see where we can improve, what areas we can improve on.”