Stuttgart have completed the signing of teenager Mohamed Sankoh. The talented centre-forward spent a trial period with Chelsea but the Premier League club decided against snapping up his signature.

Sankoh alerted clubs to his abilities while playing for Stoke at Under-18 and Under-23 level.

The 16-year-old striker scored nine goals and provided nine assists in just 16 appearances for the academy.

Frank Lampard’s Chelsea invited Sankoh to their Cobham training facility for a trial period to assess his abilities in person.

JUST IN: Man Utd forward will be dropped if £100m Jadon Sancho transfer is completed 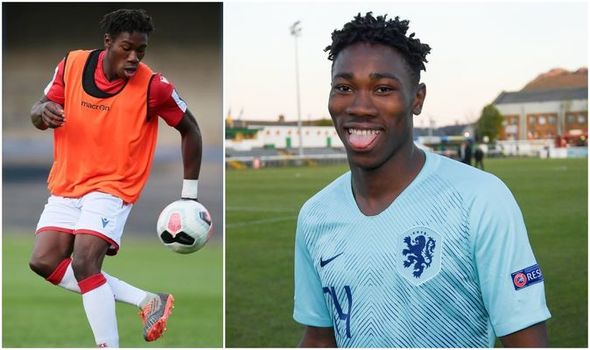 But Goal claim the west London outfit passed up the opportunity to add the Netherlands Under-17 international to their academy ranks.

Stuttgart, who earned promotion to the Bundesliga this season, had no such hesitation in securing his signature.

German publication Kicker claim the club have paid a £135,000 training allowance and will have to agree a compensation package with Stoke.

The German club’s sporting director Thomas Krucken confirmed Sankoh’s arrival on a long-term deal and revealed the player would slot into their Under-19 squad.

“We are happy to be able to sign Mo, a highly gifted offensive talent, in a joint effort across the sports departments,” Krucken said.

“We will aim to further encourage his high development potential in the next few years.

“We will carefully and purposefully introduce him to the requirements of the men’s team and start his path at VfB in the Under-19s.”

After signing the deal, Sankoh wrote in his official Instagram account: “Happy to sign my first professional contract with this beautiful club. @vfb Can’t wait to start!”