Chelsea could have a free run at signing Kai Havertz this summer after Bayern Munich confirmed they are not trying to acquire the German international. The Bundesliga giants were one of the few clubs in a position to challenge Chelsea for the signature of Havertz but are not in the transfer race for the Bayer Leverkusen ace anymore.

Chelsea are currently undergoing a squad overhaul as manager Frank Lampard looks to make his mark at Stamford Bridge, with deals for Hakim Ziyech and Timo Werner already secured.

The Blues have now turned their attention to Havertz as they look to further bolster a formidable attack ahead of next season.

The 21-year-old is already believed to have agreed personal terms with Chelsea while the west London club is in negotiations with Leverkusen over a fee.

Real Madrid and Bayern Munich had previously shown interest in Havertz but the latter have ruled themselves out of signing the in-demand attacker.

JUST IN: Chelsea end of season player ratings: Pulisic, Mount and Giroud excel but star gets a 2 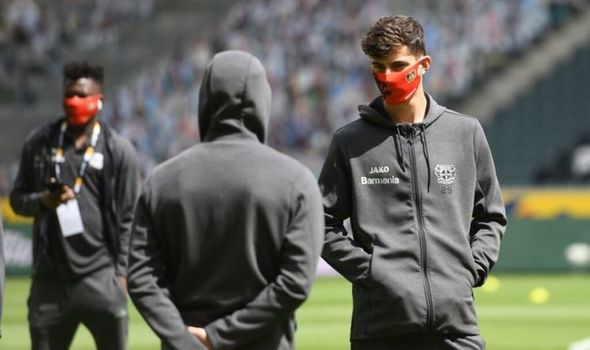 Club legend Lothar Matthaus had previously endorsed a move for a player described as a “mega-talent” but honorary president Uli Hoeness has now poured cold water on a potential transfer.

Bayern have already paid an initial £44million fee to sign Leroy Sane from Manchester City and no further big-money deals are expected this summer.

“I am sure that after Leroy Sane there will be no major transfers this year,” Hoeness told German newspaper FAZ.

“That has nothing to do with the quality of Havertz. We all think he is a very, very good player.

“But in the Corona period after a transfer of almost 50 million, one of 70, 80 million or more I can’t imagine making unless we secure counter-financing through player sales.”

Havertz is currently training with Leverkusen ahead of the second leg of their Europa League Round-of-16 tie against Rangers.

However, it remains to be seen whether the youngster will actually play the fixture or will look on from the sidelines with so much speculation around his future.

When asked for an estimated date on a decision about Havetrt’z future, Leverkusen coach Peter Bosz said: “I couldn’t say.

“Perhaps the crucial call will come today, maybe next week, maybe not at all.” Havertz has two years left to run on his contract at the BayArena but has already made clear his desire to leave the club this summer.

It has previously been reported that Leverkusen value their star man at €100million (£91m) while Chelsea see €70m (£63.8m) as a more accurate assessment.

It was suggested the Blues want to get the deal done as soon as possible so they could go as high as €80m (£72.9m) with their opening bid.

The versatile attacker has scored 45 goals in 148 senior appearances for Leverkusen, including 17 this season across all competitions.