Chelsea transfer target Kai Havertz will take the Premier League by storm if he completes a move to England this summer, according to former Rangers midfielder Kevin Thomson. Bayer Leverkusen star Havertz is a key target for Chelsea in the current transfer window. The Germany international would be the third attacking signing Blues boss Frank Lampard would have made ahead of the start of next season.

The 21-year-old versatile forward could cost Chelsea upwards of £90million.

And speaking ahead of Rangers’ Europa League last-16 second-leg tie against Leverkusen on Thursday, Thomson backed Havertz to succeed at whichever club he moves to.

“I think that [price tag] just puts into perspective of the calibre of the team we’re going to face tonight,” Thomson said on BT Sport.

JUST IN: Arsenal urged to make Willian decision which could stop deal for Chelsea star 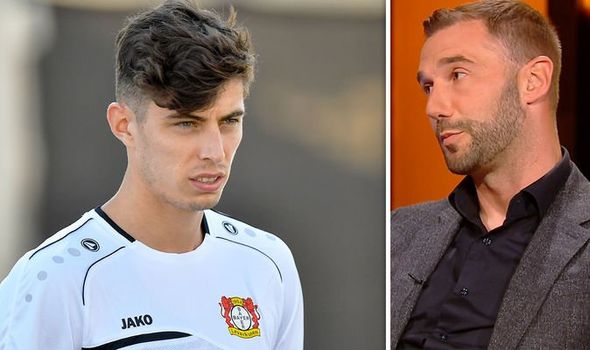 “He’s a real top player, it’s there for everyone to see and I’ve got no doubt if he does go into a different team in Europe, whether he ends up in the English Premier League, I’m pretty sure he will take it by storm.

“He’s a real talent, I think unusual for a forward player, he’ll score goals with his head but he’ll also run in behind. He looks a real star.”

Former Rangers defender David Weir can see why the likes of Chelsea are interested in Havertz.

“He does [score different types of goals], he can play in different positions around the front areas and that’s a real skill,” Weir said.

“You see the goals he scores as well, they’re all different types of goals.

“He scores with his head, both feet, he can score off a No 9 or he can be the No 9 himself.

“He’s got real good variation in his play and you can see why the top clubs really are looking at him.”

Meanwhile, transfer expert Ian McGarry claims Lampard is willing to sell up to five players this summer in order to fund moves for new defenders.

McGarry said on the Transfer Window podcast: “You would have heard us speak on numerous occasions about Frank Lampard’s desire to ramp up his defence and therefore the purchases of Ziyech and of Timo Werner, and the potential arrival of Kai Havertz, do not fulfil the particular roles of augmenting the defence.

“It’s our information that Lampard is willing to sell up to four of possibly five of his current defensive players including Kurt Zouma, Andreas Christensen, Emerson and Marcos Alonso.”

Southampton’s Nathan Redmond ruled out for up to three weeks