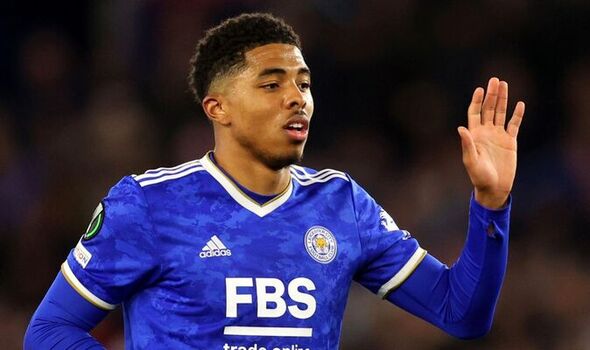 Wesley Fofana has been openly flirting with a transfer to Chelsea on social media, liking a series of posts discussing his potential move to Stamford Bridge. The Leicester centre-back is among the names currently being considered by Thomas Tuchel as the German begins to rebuild his defence following the departures of Antonio Rudiger and Andreas Christensen.

Yet Leicester are potentially set to price Fofana out of a move as they continue to insist the Frenchman is not for sale.

The Foxes are only likely to sanction the departure of their defensive gem if they receive an irresistible offer and that is seemingly something of frustration to the player himself.

Eagle-eyed Chelsea fans have already spotted that Fofana has recently removed Leicester from his Twitter bio, with some supporters suggesting he is pushing for a move.

Fofana’s latest activity may counter that argument though. He favourited a tweet from ‘Leicester City France’ that read: “Our comment refers to the irony of the situation.

“Just because Wes removes ‘lcfc’ from his bio doesn’t necessarily mean he’s divorced from the club.”

Fofana also liked a tweet from London is Blues Podcast that read: “@CFCCentral3 “Signing Fofana would be a great example of smart recruitment. He is an extremely good all around defender. He’s deceptively tall (6ft 3′) and combines a physical presence with great speed. He could be the signing that lasts for the next 10 years.”

Since then, Fofana has covered his tracks and unliked the tweet but a number of supporters managed to grab screenshots of his activity.

He also uploaded a cryptic post to his Instagram story of an inspirational quote which reads: “My father told me you’re going to annoy a lot of people when you start doing what’s best for you. And I’ve begun to realise it.”

Leicester manager Brendan Rodgers has already ruled that his defender is not for sale under any uncertain terms.

The Northern Irishman said: “Naturally, he’s a top talent but he’s not for sale. He still has lots of improvements to make. He’s very happy here, he really enjoys being here.

“Naturally he will attract the interest of other clubs. Our job, in not signing anyone so far, is to at least keep the players we have. I know that’s the intention of the club.”

Leicester are the only club in Europe’s top-five leagues that are yet to make a signing this summer and funds remain limited at the King Power Stadium.

That’s why both Chelsea and Newcastle feel there is a potential window of opportunity to land Fofana or James Maddison this summer but Leicester are adamant their stance won’t change.

Paris Saint-Germain are also monitoring Fofana but it’s unclear whether they will firm up their interest with an offer.

Chelsea may have to get creative after Leicester slapped a £70m price tag on Fofana and there have been reports that claim Ruben Loftus-Cheek could be included in a potential swap deal.

Mbappe on Neymar row: I called him a tramp