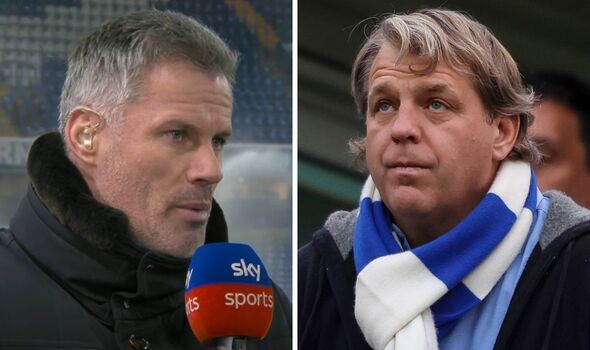 Jamie Carragher has been left perplexed at the ‘baffling’ transfer business Todd Boehly since completing his takeover last summer. Chelsea fans didn’t have to wait long to find out how much money their new owner would be willing to splash in the transfer market with around £270million used on big signings such as Raheem Sterling, Marc Cucurella and Kalidou Koulibaly.

He also paid out a small fortune in compensation fees when Thomas Tuchel was sacked and replaced with Graham Potter. And the Chelsea owner has continued his spending in the January transfer window with the signings of David Datro Fofana and Benoit Badiashile.

Even more could be spent this month with the likes of Joao Felix and Mykahilo Mudryk being strongly linked with moves to Stamford Bridge. But Carragher, speaking before Chelsea’s 1-0 defeat to Manchester City on Thursday night, took aim at Boehly’s current transfer policy.

The former Liverpool defender believes Chelsea have taken a huge step back despite the massive outlay in the transfer market. “Players aged 23 or 24 are not that young,” Carragher said.

“Look at the top end [of the age group of Chelsea signings in the Todd Boehly era], there’s Raheem Sterling – who is a good signing but he hasn’t set the world alight, there’s Kalidou Koulibaly who is not a great signing and I don’t think Pierre-Emerick Aubameyang is a good signing. You’re talking about a club that has spent £300m on top of the team last season and we’re talking about them not bringing in winners or the right players.

“I totally disagree with the idea that Graham Potter is inheriting the problems that were there before. I thought Chelsea were in a great position. With Thomas Tuchel, they won the Champions League but they also got to every possible cup final he could possibly get to.

“They finished third behind the two best teams in the world – that’s fair to call Liverpool and Manchester City that. To go from where they were – and I remember them playing Liverpool in the two cup finals and they were very good – and to spend £300m and be further away [from Liverpool and City] is just baffling.”

Chelsea’s defeat to City now leaves them down in 10th in the table and a long way away from the Champions League spots. They’re currently as close to the relegation zone as they are to a top-four spot having lost six of their 17 games.

And Potter’s side face a difficult test to progress to the next round of the FA Cup this weekend when they take on City once again.