Thomas Tuchel’s reign at Chelsea has so far been an impressive one, with the Blues through to the FA Cup final, faring well in the Champions League semi-finals and into the top four of the Premier League.

But there’s still room for improvement – and their home form domestically might be one of those areas for the manager to focus on. The Blues have won just one of their last four at Stamford Bridge in the league, with their two most recent home games being a defeat to West Brom and a draw with Brighton.

Victory here will give them not only a comfortable gap down to fifth-place West Ham in the battle for a top-four finish, but also push local rivals Fulham closer toward the trapdoor of relegation.

Scott Parker’s side were gaining ground on the teams above them up until a month ago, but four straight defeats and conceding a very late goal to draw with Arsenal last time out has them on the brink of the drop.

Wins are all-important for the Cottagers at this stage, but it doesn’t come much tougher than facing European semi-finalists who have an agenda of their own making three points vital.

Follow our live coverage of Chelsea against Fulham below, along with the day’s Premier League action.

Chelsea kick off the game at Stamford Bridge

Kick off: Kai Havertz gets the match underway with a pass into his own defence. Kurt Zouma collects the ball and fires a long aerial pass up the pitch. Havertz himself is the target but Joachim Andersen beats him in the air and wins the ball for Fulham.

The teams head out

The two sides make their way out onto the pitch at Stamford Bridge. Chelsea will create a six point cushion over West Ham if they pick up all three points today. They’ll also move within two points of Leicester in third to pull them back into the fight for Champions League places.

It’s difficult because the games are running out. The one thing I want to get across here is that I understand that there is a difficult challenge ahead of us and it is a hard task. I’m not deluded in any way.

“I never want to try and blind my players or give them some hope that maybe isn’t there. So everything I’m saying is coming from a place that I firmly believe and I want my players to understand that.

“I firmly believe that you can’t be that close [in matches], like it has been, and be a dead and buried team.”

Chelsea boast the best record in London derbies this season, winning six of eight and only losing once but can Scott Parker’s Fulham cause an upset at Stamford Bridge today?

A bad run of form

Fulham have taken just one point from five games since their 1-0 victory over Liverpool in March. They’ve also dropped 13 points from winning positions in away fixtures this season, the worst record in the division. 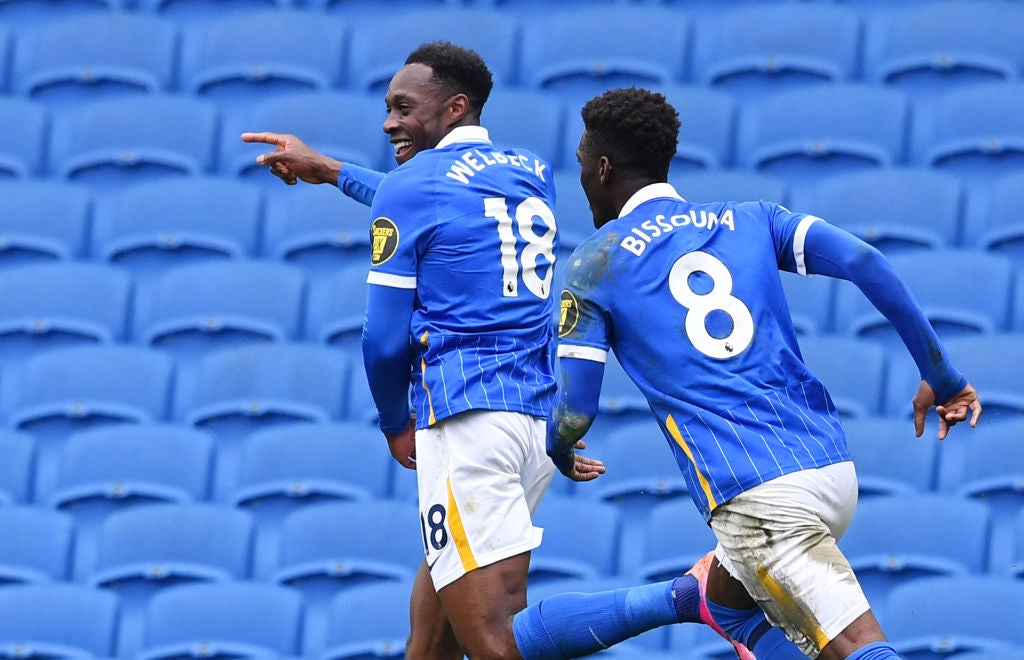 Brighton 2-0 Leeds: Despite spurning a host of chances once more, the Seagulls take the points after Pascal Gross nets a penalty and Danny Welbeck’s moment of magic

Fulham haven’t won a top-flight London derby in 23 attempts since beating West Ham 2-1 in January 2014, they’ve lost 18 and drawn five. As the game kicks off they’re nine points away from safety. This is a must win game for Scott Parker’s side, but it’s going to be incredibly tough.

Chelsea have lost just one of their 14 Premier League games under Thomas Tuchel, which was a home thrashing by West Bromwich Albion. They’ve won eight and drawn five.

Tuchel has amassed 29 points in those 14 matches, the same total Frank Lampard managed in 19 league fixtures this season before he was sacked.

Chelsea are unbeaten in 18 home games with Fulham in all competitions since a second tier defeat in October 1979, they won 10 and drawn eight of those games.

Fulham’s solitary victory in the last 39 meetings was by 1-0 in the Premier League at Craven Cottage in March 2006. That means they’re long overdue to pick up three points

Liverpool eyeing Serie A and Bundesliga stars as Wijnaldum replacements