Accrington boss John Coleman is one manager who is certainly no stranger to a Christmas Day training session.

Across two different spells, Coleman has spent 19 years as Accrington’s manager. They have lost just once in their last nine league games and face Doncaster, who are fourth in League One, at the Keepmoat Stadium on Boxing Day.

Accrington are only five points off the top of the table and Coleman says his side have risen to every challenge put in front of them – including coming in for a Christmas Day session at their Baxenden training ground.

“The lads have taken it quite well to be honest with you,” Coleman told Sky Sports News.

“We did give them the incentive if they had beaten Blackpool they could have been off! But it’s too important a game tomorrow and we have to just do the final details today.

“We told the lads on Saturday that we are starting to look like promotion candidates, and we have to start acting like it. And you only act like that when you do that on the pitch.

For Scunthorpe manager Neil Cox, who was also putting his players through their paces on Christmas Day, training at this time of year – particularly after the year that everyone has had – is all about striking the right balance. 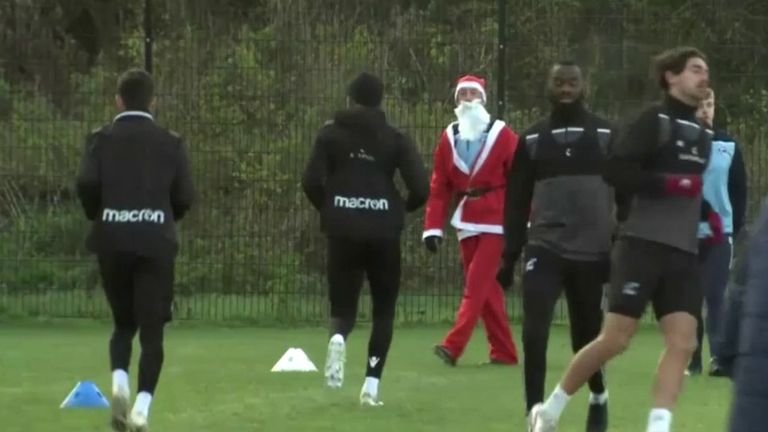 “It’s Christmas and we have got to have a little bit of fun,” Cox told Sky Sports News.

“Obviously the boys have come in, one or two are not happy, one or two are, but it is football. This is our job and we have to get ready for a big game tomorrow.

“It’s been a difficult time and we had a big decision to make – do we bring then in or not bring them in for training?

“We all decided together to come in. It’s important we get some points on the board, but we need to have some fun with them. A lot of them have had some difficult times. A lot of travelling but we are in and we are going to have some fun.”

Manchester United attacked by cyber criminals in a ‘sophisticated’ disruption

Southampton vs Liverpool prediction: How will Premier League fixture play out?