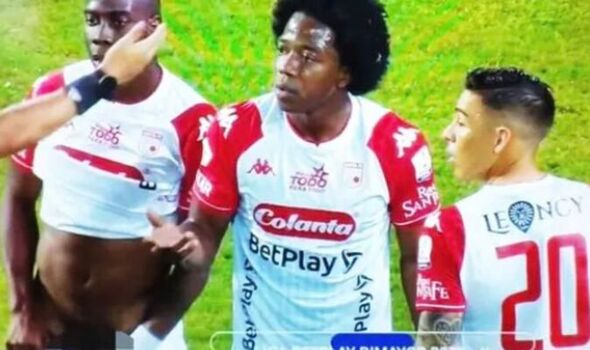 A Colombian top division player appeared to flash his penis to distract an opposition player in a bizarre viral stunt. Independiente Santa Fe defender Geisson Perea seemed to expose his genitals as a player from Jaguares de Cordoba lined up a free-kick.

Perea has since denied that he intentionally showed his penis, instead insisting that he simply meant to adjust his lycra. The incredible scenes were broadcast on Colombian television.

Clips of the incident appear to show Perea pulling the front of his shorts down as Jaguares lined up a threatening dead-ball situation. His penis is clearly visible in footage, and it looks as though it is a unique attempt to put off the opposition.

Amazingly, the referee did not notice Perea’s antics and the 31-year-old somehow escaped punishment. That is despite the official being mere yards away as he set up the defensive wall.

Perea has since denied that the act was intentional. He claims he was actually attempting to adjust his lycra and had forgotten that television cameras would pick up his penis outside his shorts.

He told Colombia’s Win Sports TV: “I was fixing my lycra, I had that space. When I enter [the pitch], I enter it to play and not to be aware that a camera can see me. They are synonymous with emotions that move.

“I am a human being and I only tried to accommodate my lycra, my intention was not to show my private parts.”

It remains to be seen whether Perea will be punished for flashing his private parts. The player, who is on loan from fellow top-division side Atletico Nacional, has been widely condemned by fans on social media.

Unfortunately for Perea and Santa Fe, his stunt was not a sufficient enough distraction to prevent Jaguares winning the game 3-1. The centre-back is unlikely to repeat his unconventional move.

TMZ Sports have reported on the wide range of reactions from supporters. Some have called for a simple punishment, such as a suspension.

Others want Santa Fe to sack the experienced star.

Perea has made 17 appearances in the Colombian top flight this season, including 15 starts. Santa Fe are eighth in the table and face Deportivo Cali next weekend.