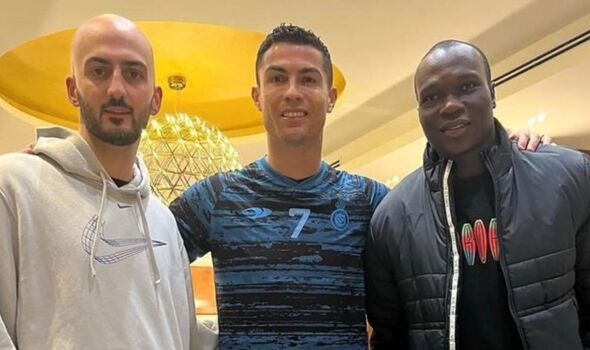 Cristiano Ronaldo may just have had a part to play in Manchester United’s potential deal to sign Wout Weghorst this January. Erik ten Hag’s side are in the market for attacking reinforcements after freeing the veteran Portugal international from his contract in November and Dutch target man Weghorst is the man on this month’s transfer agenda.

Yet there is still plenty of work that needs to happen before United strike a deal with Burnley, who are in the process of exploring the termination of Weghorst’s Besiktas loan.

Express Sport understands the striker’s representatives will hold discussions with the Turkish club on Monday in a bid to set up their client’s Old Trafford switch.

However, Besiktas have already declared that they won’t be giving the player up without a substantial compensation package.

But, crucially, Besiktas are now exploring the possibility of signing their former striker Vincent Aboubakar, who is a free agent after departing Al-Nassr in Saudi Arabia.

The Cameroon international has been released by the Middle Eastern outfit to accommodate the arrival of Ronaldo and if Besiktas are to strike a deal with their ex-forward, Weghorst could get the green light to join United.

The bizarre triangle has also had the added twist of United being linked with an unexpected swoop for Aboubakar.

It’s no secret that United have been keen to explore the loan market this month as they’re short of finances due to their excessive summer spending.

Aboubakar has recently become available following Ronaldo’s lucrative transfer to Al-Nassr but it appears United are now pursuing an alternative target in Weghorst, who wants the move.

There is growing confidence an agreement can be struck between all parties as Besiktas hastily await a solution.

Reports in Spain suggest United might be saving their No 7 jersey for Joao Felix following initial loan talks with Atletico Madrid.

It is currently unclear whether interest in Weghorst would have any impact on the potential pursuit of Felix.

Besiktas sporting Ceyhun Kazanci has already made it clear that Burnley hold all the cards in negotiations.

“I don’t understand why Weghorst said goodbye to the fans, why he made such a move. He is our football player right now,” Kazanci told NTV Spor.

“Our contract expires at the end of the season. If Manchester United or any other team wants Weghorst, they will meet with Burnley anyway. Burnley will then contact us and discuss the terms of separation.

“If we accept, the contract will be terminated. Otherwise, it will go on until the end of the season. He can’t just go. There will have to be a reward for us to approve the separation. I’ll give an example.

“Burnley told us, ‘We made a deal with this team for Weghorst. We give you half of the transfer fee’. This may be a different condition. Then we’ll sit down and talk.”